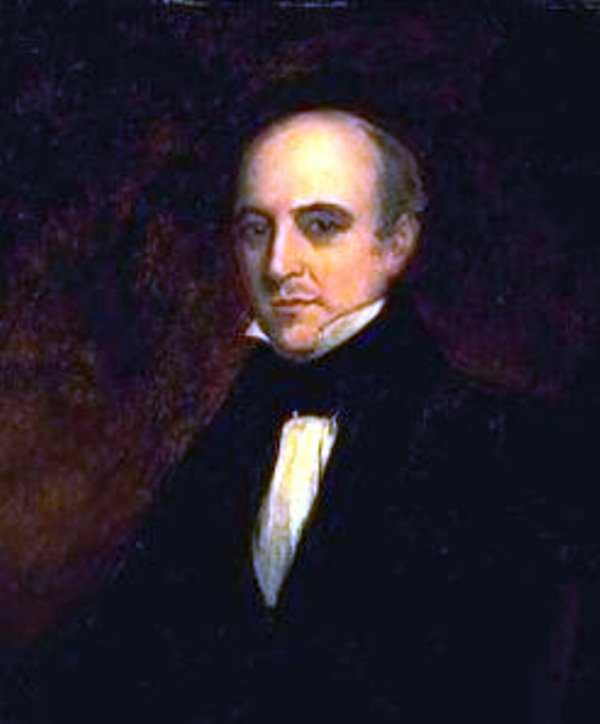 Allan Cunningham, the explorer and botanist passed through the area in 1827 when he followed Dangar’s route north and went on to discover the Darling Downs in Queensland.

This article published in Australian Dictionary of Biography, Volume 1, (MUP), 1966

Allan Cunningham (1791-1839), botanist and explorer, was born on 13 July 1791 at Wimbledon, Surrey, England, elder son of Allan Cunningham of Renfrewshire, Scotland, and an English mother, née Dickin. He was educated at a private school in Putney and worked for a time in a conveyancer’s office in Lincoln’s Inn, but the law was not to his liking and in 1808 he accepted a position at the herbarium at Kew as clerk to the curator of the Royal Gardens, William T. Aiton (1766-1849), then completing work on the second edition of his father’s Hortus Kewensis, 1-3 (London, 1810-13). At Kew Cunningham met Robert Brown, who had been botanist in the Investigator with Matthew Flinders and then librarian to Sir Joseph Banks, and on Banks’s recommendation was appointed a botanical collector to the Royal Gardens. On 29 October 1814 Cunningham sailed with James Bowie in H.M.S. Duncan for Rio de Janeiro to collect specimens in Brazil, where they remained for two years. Bowie was then ordered to the Cape of Good Hope and Cunningham to New South Wales.

Cunningham arrived at Sydney Cove in the Surry on 20 December 1816. He was received kindly by Governor Lachlan Macquarie who suggested that he join John Oxley‘s projected expedition into the country west of the Blue Mountains: this was arranged and while awaiting departure Cunningham rented a cottage at Parramatta and botanized in the surrounding district. He left Parramatta in April 1817 and returned in September having accompanied Oxley to the Lachlan River marshes and collected specimens of about 450 plant species. The last four months of 1817 were spent preparing these specimens for dispatch to Kew, in more collecting around Parramatta, and in preparing to join Phillip Parker King‘s voyage to the north and north-west coasts of Australia in the cutter Mermaid, which sailed from Sydney on 21 December 1817. This voyage took him to Twofold Bay, King George Sound and to Exmouth Gulf whence the coast to Port Walcott (Cossack) was examined, Cunningham having frequent opportunity to land and collect specimens. From Port Walcott the party went to the north coast of Arnhem Land and explored it westward from Goulburn Island and the King River, around the Cobourg Peninsula and into Van Diemen’s Gulf as far as the West Alligator River. The Mermaid visited Melville and Bathurst Islands, called at Timor and the Montebello Islands, and anchored in Sydney Cove on 29 July 1818. During this voyage Cunningham collected specimens of about 300 species, including many new ones from Arnhem Land.

Cunningham spent a few more months at Parramatta and a month botanizing in the Illawarra district. Early in 1819 he visited Van Diemen’s Land with King in the Mermaid, and on 8 May they sailed again for the north-east coast. On this voyage they visited Port Macquarie, Port Curtis, the Percy Islands which Brown had visited with Flinders, Cook’s Repulse Bay, Cleveland Bay, Palm Island, Rockingham Bay, Fitzroy Island and the Endeavour River. Returning to Goulburn Island King proceeded to examine the coast from Clarence Strait to Admiralty Gulf, and by the time the Mermaid quitted Cape Voltaire Cunningham had collected specimens of more than 400 species and was delighted to have obtained some that would replace the ‘imperfect’ ones collected on the east coast by Banks in 1770.

The Mermaid returned to Sydney in January 1820 and in July departed on her third voyage to the north-west coast. This voyage took Cunningham to Flinders’ Port Bowen (Port Clinton) and again to the Endeavour River, then to Booby Island and back to Goulburn Island and Cape Voltaire, where the real work of the voyage, the charting of the coast south-westward to Brunswick Bay, began. Arriving back in Sydney on 9 December 1820 Cunningham was distressed to hear of the death of ‘an excellent and invaluable friend’, Sir Joseph Banks.

On 26 May 1821 Cunningham accompanied King on his fourth voyage to the north-west coast, this time in the Bathurst. Again they went to Goulburn Island and then to Brunswick Bay and Camden Sound. Fear of the shoals led King to avoid a close investigation of Collier Bay, and from the Buccaneer Archipelago he went to Cygnet Bay and Swan Point, neglecting the deep sound which was later given his name. He examined the coast from Cape Levêque to Roebuck Bay and then sailed for Mauritius. Cunningham had not been well during the latter part of this voyage and had gathered few specimens, but at Mauritius he was able to exchange some Australian plants for Indian, African and Madagascan plants before the Bathurst sailed for King George Sound and then northward along the western coast of Australia, visiting Rottnest Island, Houtman Abrolhos, Dirk Hartog Island and King Sound (named by Stokes in King’s honour). The expedition returned to Sydney on 25 April 1822. Cunningham contributed a chapter, ‘A Few General Remarks on the Vegetation of Certain Coasts of Terra Australis’ to King’s Narrative of a Survey of the Intertropical and Western Coasts of Australia, 1-2 (London, 1827).

Cunningham now turned his attention to the botany of New South Wales. Between September 1822 and January 1823 he spent his time botanizing in the area between Bathurst and the Cudgegong River and exploring the area east of the Cudgegong. This journey whetted his appetite for land exploration: Governor Sir Thomas Brisbane offered support and Cunningham wrote to Kew, ‘I find I can blend discovery with botanical research tolerably well’, and outlined a plan of a journey to seek a route from Bathurst to the upper Coal (Hunter) River and thence to the Liverpool Plains discovered by Oxley in 1818. Late in March 1823 he set out for Bathurst and then travelling to Lawson’s Goulburn River, he turned east into the headwaters of the Hunter where he made a wide circuit without seeing any possible opening in the Liverpool Range to the north. He returned to the Goulburn River, then travelled north into the foothills of the range; from a peak he saw a little farther west ‘a very considerable depression in the low back of the main ridge’ and through it the open plains to the north of the range. He had discovered the passage he sought, ‘the great route of communication between Bathurst and Hunter River and the Liverpool Plains’. He returned to Bathurst late in June. His accounts of these two journeys from Bathurst, ‘A Specimen of the Indigenous Botany … between Port Jackson and Bathurst’, and a ‘Journal of a Route from Bathurst to Liverpool Plains’, were published in Geographical Memoirs on New South Wales; by Various Hands (London, 1825), edited by Barron Field.

After June 1823 Cunningham made short journeys to districts already known: he visited Bathurst several times, once with Dumont d’Urville and R. P. Lesson, members of the French Coquille expedition, went south-west to Lakes George and Bathurst between March and May 1824, spent July and August in the Illawarra, and in September and October 1824 visited Moreton Bay and the Brisbane River with Oxley in the Amity. In March 1825 Cunningham returned to the Hunter by John Howe‘s overland route from Richmond and, after spending some time in the upper Hunter valley went through Pandora’s Pass and northward across the Liverpool Plains returning to the pass and thence to Bathurst where he arrived in June. From October to December 1825 he was in the Wellington valley and Mudgee areas. In August 1826 he sailed for New Zealand in a whaler, returning to Sydney in January 1827. Accounts of his work in New Zealand were published in Hooker’s Companion to the Botanical Magazine (1836) and the Annals of Natural History (1838-39).

Cunningham’s longest, and perhaps most important, journey lasted from 20 January to late August 1827: from the Hunter valley he travelled northward crossing the Peel and Dumaresq Rivers and entered the Darling Downs before returning to the Hunter valley and Bathurst. While in the Darling Downs he found a gap in the ranges, now called Spicers Gap, which he thought would give access from Moreton Bay to the downs, whose fine grazing country he regarded as of major importance. In July and August 1828 he returned to Moreton Bay by sea and explored the country southward to the Logan River and Macpherson Ranges and passed through another gap, now known as Cunningham’s Gap, and in May 1829 explored the upper part of the Brisbane River valley. Between these visits to Moreton Bay he made trips to Bathurst and Illawarra, and between May and September 1830 visited Norfolk Island.

In 1828 Cunningham had requested permission to return to Britain. This was granted in November 1830 and, after quick visits to Illawarra and Cox’s River, he sailed from Sydney in the Forth on 25 February 1831 and arrived in England in July. He took a house at Strand-on-the-Green near Kew, and spent his time arranging his collection of specimens in the herbarium and preparing papers for publication. In 1832 he was elected a fellow of the Linnean Society, the council of which took the unusual step of returning his fee of £36 because of his valuable services to natural science. Besides his work on New Zealand plants, he wrote a ‘Brief view of the progress of interior discovery in New South Wales’ published in the Journal of the Royal Geographical Society of London (1832), and ‘On the physical and geological structure of the country to the west of the Dividing Range between Hunter’s River … and Moreton Bay …’ for the Proceedings of the Geological Society, London (vol. 2, 1834-35).

On the death of Charles Frazer in 1832 Cunningham was offered the position of colonial botanist in New South Wales but declined it in favour of his younger brother, Richard, who had joined Aiton’s staff at Kew about the same time as Allan, and was already familiar with his brother’s collection of plants. Richard arrived in Sydney in February 1833 and was killed by Aboriginals in April 1835. When news of Richard’s death reached England the position was again offered to Allan Cunningham, who accepted it and returned to Sydney in the Norfolk, arriving in February 1837. He found the duties of colonial botanist uncongenial, objected to superintending ‘the Government Cabbage Garden’ where among other things he was expected to grow vegetables for the governor’s table, and resigned after a few months, despite Governor Sir George Gipps‘s attempts to retain his services, to resume the ‘more legitimate occupation’ of collecting. In April 1838 he sailed for New Zealand in a French ship L’Héroïne, returning to Sydney in October seriously ill. While his health became steadily worse he continued collecting and made plans to accompany Captain John Wickham in the Beagle to continue the survey of the north-west coast, but he was so ill that the Beagle had to sail without him and, on 27 June 1839, he died in Sydney of consumption.

Cunningham is most frequently remembered as an explorer and particularly for being the first European to see Pandora’s Pass, the Darling Downs and Cunningham’s Gap, but exploration was to him a secondary interest that could be pursued in conjunction with his real purpose, the study of botany. Fellow botanists have honoured the Cunningham brothers’ work by giving their name to a number of Australia’s trees: Araucaria cunninghamii (hoop pine), Archontophoenix cunninghamiana (Bangalow palm), Casuarina cunninghamiana (river sheoak), Diplogottis cunninghamii (native tamarind now D. australis), Ficus cunninghamii (white fig, now F. infectoria), Medicosma cunninghamii (bone wood), Nothofagus cunninghamii (myrtle tree, Tasmania), Pennantia cunninghamii (brown beech), and Polyosma cunninghamii. The president of the Linnean Society in London, reporting his death to the society, commented: ‘He was distinguished for his moral worth, singleness of heart, and enthusiastic zeal in the pursuit of science’.