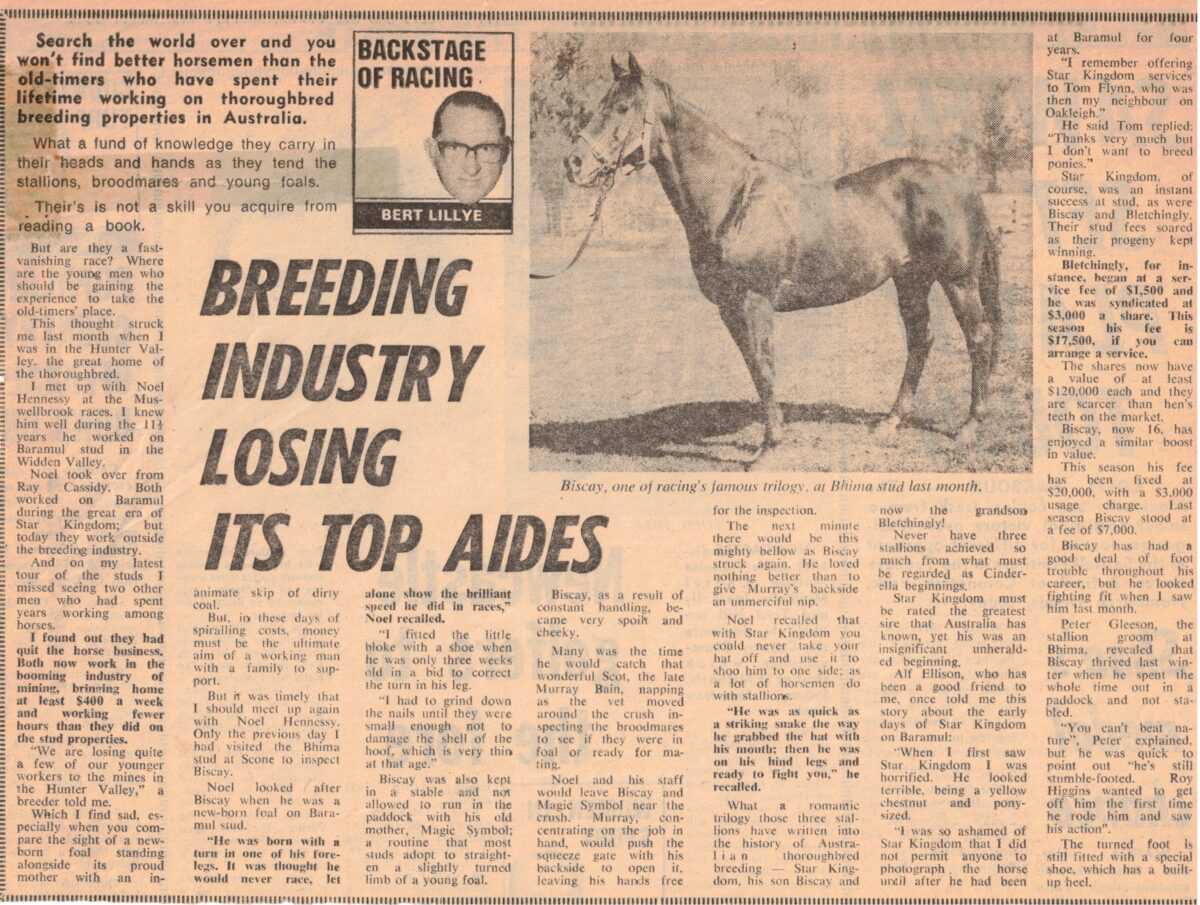 Featured Image: Backstage of Racing by Bert Lillye featuring comments ‘from the horse’s mouth’ on Biscay

The headline in the Spring Edition 1979 of now defunct ‘The Racehorse Owner’ read: “Will Biscay be the one to wear his Sire’s mantle?”.

It was a propitious, percipient, and prescient prediction. The unequivocal answer is indubitably yes. Biscay did not make waves in the industry in his first year of Stud Work. He covered 19 mares at ‘Baramul’ in season 1969. Six (6) of these were exported to the USA in 1970. I accompanied them on their trans-pacific sea journey on the MV ‘Parrakoola’ in July of that year. Zephyr Bay, Bletchingly, Scarlet Kingdom and Tangent were among the products of this first crop. The emphasis was very much on QUALITY, not QUANTITY. Mr S T Wootton was very firm indeed on this premise.

Biscay stood the 1970 season at Segenhoe Stud where he covered 29 mares. Suggest (11 races won including a track record) & Brazen Bay were the two best performing sons of this ‘get’. Biscay was relocated to Bhima Stud in 1971 where he stayed for the remainder of his stud career. In 1971 he covered 34 mares and only 18 in 1972. Blue and Gold (AJC Breeders Plate), Man of Rank (13 wins), Night Charmer (Queensland Guineas), Otehi Bay, Royal Biscay, Gay Biscay and Woodken represented him from the 1971/1972 crops. By this time Biscay had become leading 1st season Sire (1973) and attracted much keen interest although this was still the era when ‘Imp.’ rather than ‘Aus.’ was preferred in any stallion pedigree.

From 1974 Biscay covered full books of mares producing Money Talks, Deep Reflection, Arochan, Naisko and Biscapol. Both Bletchingly and Zephyr Bay had by this time established their credentials with outstanding racetrack performances. The former was later to emerge as champion sire for three consecutive seasons when based at Widden Stud producing Kingston Town, Pilgrims Way, Bakerman, Super Spree, Bet Your Booties and Canny Lad (Golden Slipper). Canny Lad has further franked the Biscay legacy as the sire of the dams of both Redoute’s Choice (Shantha’s Choice) and I Am Invincible (Cannarelle). Biscay’s other outstanding sire son success was dual champion sire and Golden Slipper winner ‘Marscay’ who stood at Widden and was bred by Woodlands.

The ‘arthritis’ referred to in Bert Lillye’s article was severe navicular disease. Bletchingly also suffered from this infliction and probably Star Kingdom as well? I have in my possession Biscay’s navicular and pedal bones from both his forefeet.