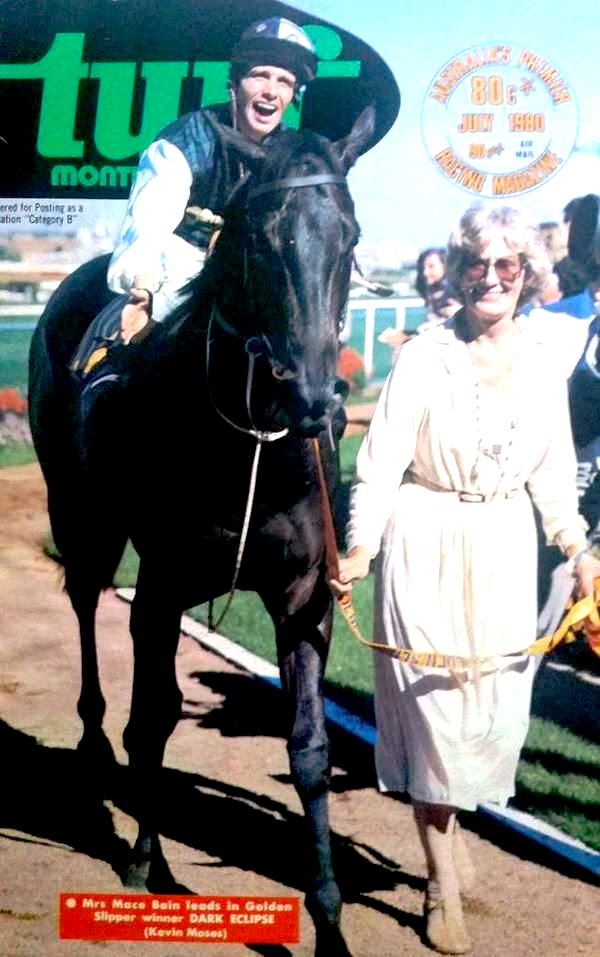 This was a very strong ‘Scone Victory’.

Featured Image: Mrs Mace Bain from Scone leading ‘Dark Eclipse’ back to the winner’s enclosure following a stunning win in the 1980 running of the Golden Slipper Stakes at Rosehill. Mrs Bain raced the filly in partnership with her daughters Morag and Fiona. I believe they were the very first female owners of a Golden Slipper winner?

Although Murray Bain was not listed as the official breeder of Dark Eclipse he was in fact fundamental in her conception. He purchased both her dam ‘Marjoram’ and a share in her sire ‘Baguette’ when the latter was syndicated by George Ryder to stand at Kia Ora Stud, Scone.

Racehorse Dark Eclipse was foaled in 1977 and was by Baguette out of the mare Marjoram (by Major General). ‘Dark Eclipse’ was actually bred at the Bain’s small farm on Yarrandi Road, Scone. This is not generally known. The farm was later owned by fellow veterinarian Ray Gooley, then named ‘Melness’ when purchased by my late parents-in-law Bob and Ponty Mackay when they handed over ‘Tinagroo’ to son Ranald. Both ‘Tinagroo’ and ‘Melness’ are now owned by local-boy-made-good International Fund Manager David Paradice. David has a keen interest in thoroughbred racing and breeding nurtured during his ‘gap year’ at Widden in the late 1970s.

Dark Eclipse was trained by Neville Begg and ridden by Kevin Moses. She was actually the ‘second elect’ of the two stable stars in the race. ‘Fiancee’ ridden by Ron Quinton was one of the favourites but drew a very wide barrier. You can view interviews with Neville Begg and Kevin Moses plus a video of the race on:

There is no doubt ‘Dark Eclipse’ was a most impressive winner.

Murray Bain was a very successful thoroughbred breeder from a very small band of broodmares.

‘Dark Eclipse’:    (Baguette ex Marjoram). Winner Golden Slipper Stakes (Group I) 1980. Murray died in 1974 but had purchased both the share in Baguette and the dam Marjoram as a yearling. Dark Eclipse was the first Golden Slipper winner raced in female ownership. (Mrs M. J. ‘Mace’ Bain and daughters Morag and Fiona were co-owners). Marjoram was from the same family which produced the then current champion ‘Taj Rossi’.

Murray also had an ‘interest’ in the following:

‘Tod Maid’ was dubbed ‘The Flying Pencil’ by racing journalists. She was notoriously ‘light on’ when in full work and in winning form. She later came up for auction and Murray wanted to buy her back. The $20,000 price tag was too much of an impediment. She was purchased by an American and exported to the USA as part of a small package. Being by Noholme’s brother Todman was the potentially lucrative enticement for an American breeder. I remember examining her.  There was ‘something wrong’; possibly gonadal dysgenesis? She had ovaries like small hard pebbles. I don’t believe she ever produced a live foal?

‘Marjoram’ went to stud as a 2yo; she had upward fixation of the patella (‘stifle lock’). Her first foal by ‘Above Water’ was a winner: ‘Suomi’