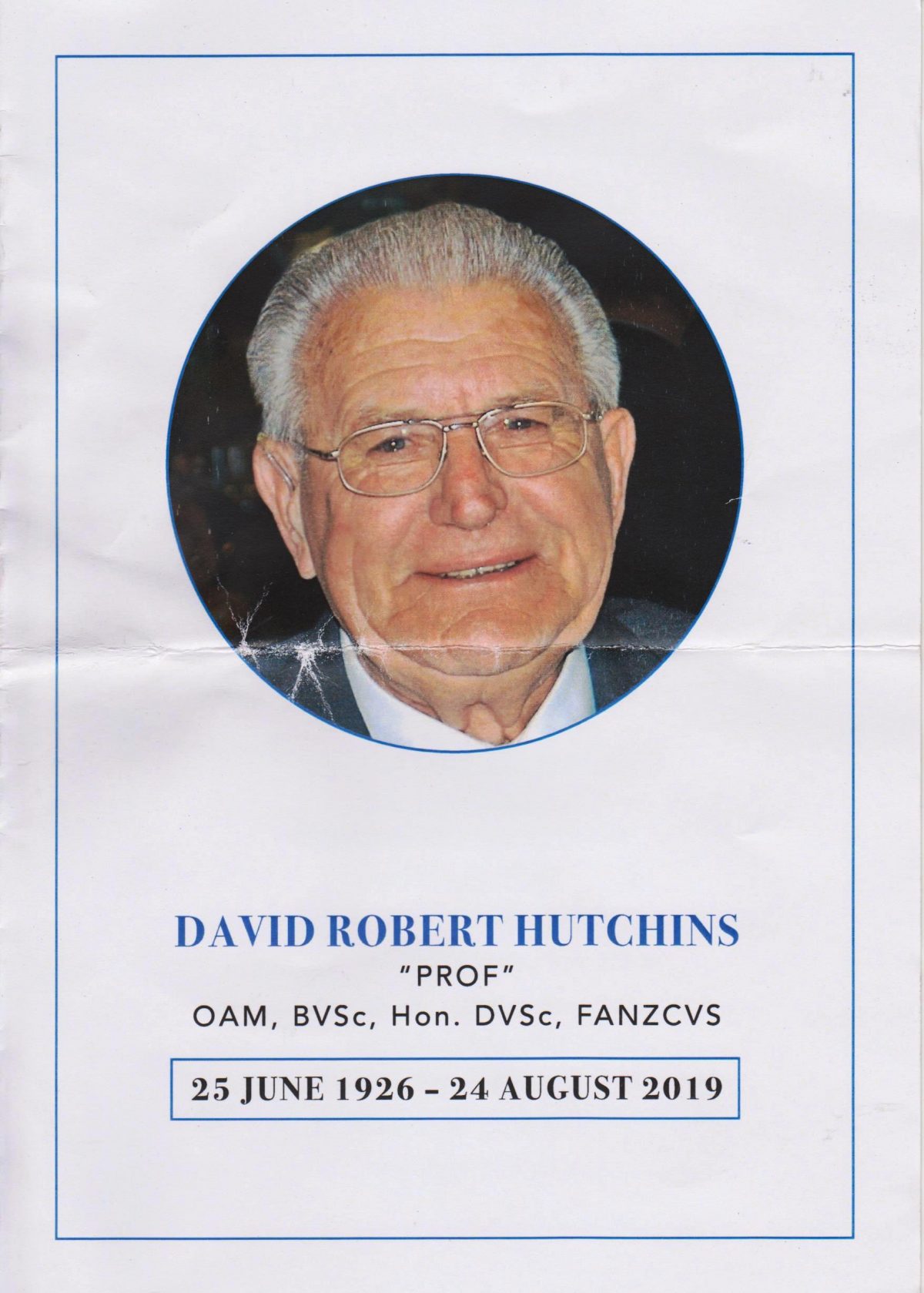 “A Celebration of an Exceptional Life”: “Prof” Dave Hutchins

It was an epic on a herculean scale. The setting was perfect and the hospitality exquisite. Who would have expected any less? Dr Treve Williams was the erudite ever-sartorial eloquent Master of Ceremonies; perfectly cast for the role. Treve was very much on home turf only marginally handicapped by recent bilateral knee replacement surgery. It didn’t stop him performing his duties as perfect gentleman. Treve paid colossal tribute to the enormous contribution made by “Prof” to the Randwick Equine Centre (REC) following forced age-related retirement from his academic position(s). It set the scene. Daughter Mrs Hellen House and grandson Mr Lachlan House followed with passionately emotive encomiums to their respectively much beloved father and grandfather. Treve had to apply the ‘rearing bit’ to both Dr Meg Brownlow and Dr Eileen Rogan who waxed eloquently on their association with “Prof” as his ‘special girl interns’ at the Rural Veterinary Centre, Camden. His exceptional professional qualities and finely honed skills made an enormous impression on both and by default almost everyone else in the room. Current EVA President Dr Sam Nugent delivered a succinct account of “Prof’s” mammoth contribution to the Equine Veterinary Profession in Australia and elsewhere. I counted many Past Presidents of the AEVA/EVA. My main problem was putting names to faces in so many cases! It was both an honour and privilege to be there.

Over 200 veterinarians and racing officials graced the occasion. Notable and recognisable among the latter were Neville Begg (father-in-law of Dr Leanne Begg REC), Ray Murrihy, Bill & Lesley Picken (STC) and the ever-elegant ‘theatrically late’ Gai Waterhouse. It was good to reminisce with Neville Begg about the win of ‘Dark Eclipse’ in the 1980 Golden Slipper Stakes for Mrs Mace, Morag and Fiona Bain. He accurately recalled everything in finest detail!

Perhaps most surprising was “Prof’s” selection of music for his farewell? Just as Reg Pascoe staggered us with his devotion to “ABBA” “Prof” was no less of a revelation. “Everybody’s Free to Wear Sunscreen” (Baz Luhrmann), “From a Jack to a King” (Ned Miller) and “I Am a Man of Constant Sorrow” (Soggy Bottom Boys) challenged most memories; but it all seemed to fit so well?

I will leave the last word to Dr Michael Robinson who was kind enough to contact me directly as soon as he knew the ultimate demise of “Prof”. I was attending my daughters’ extravaganza wedding in Darwin!

Not sure if you have already heard but sadly Professor Hutchins passed away peacefully in his sleep on Friday night (24/08/19). He was 93 years old’ a great mentor to generations of horse vets.

I often think that it is such a shame that someone has not written the history of some of the major Australian veterinary “influencers” before it is lost forever; people such as Percy Sykes, Dave Hutchins and Reg Pascoe. I actually spoke with Jeff Wilkinson (EVA) and Meg Brownlow about this recently. Your history of Scone Equine Veterinary Dynasty is an incredible resource. I probably refer to it once a month to look something up. We are all very lucky to have it!

So thank you Bill for all the hard work! )!

(Thank you Michael; I encourage everyone to do it)!

Prof David Hutchins was a great mentor, friend and confidante to generations of equine veterinarians. For so many of us became the guiding light in or professional careers, as well as being an equine veterinary superpower. I hope to see many of you at the Memorial Service to reminisce and celebrate this remarkable man’s life.

Racing NSW has been informed of the passing of Professor David Hutchins at the age of 93.

Mr Hutchins was a well-known veterinarian in the horse racing industry and was a specialist in medicine and surgery.

Some of his achievements included:

“David Hutchins gained a BVSc in 1947 and had achieved and sustained for more than 60 years, the highest level of national and international professional recognition for the quality, originality and impact of his clinical acumen and remained and inspiration to many generations of veterinarians,” said a representative of the University of Sydney.

“Professor began practice working for Sydney University at Badgerys Creek in 1947 and in 1957 the University started their facility at Camden.

“Dr Hutchins had been a pioneer of both equine surgery and medicine within Australia and his name is recognised both nationally and internationally.

“He was granted specialist registration in equine medicine in 1989 and in surgery in 1990. In 1990, Professor retired from the University of Sydney and joined Randwick Equine Centre as a consultant.”

Dr Hutchins introduced innovations in tendon surgery and attempted to save horses with broken legs using flotation tanks, including trying to save valuable stallion Planet Kingdom.

Fellow vet, Dr Stephen McLintock, said: “Dr Hutchins was my mentor and equine veterinary ‘hero’. One of my most endearing memories of him, which shows he never thought he was above anyone else, was once when we had a horrendous thunderstorm and the rain was bucketing down.

“The gutters on the hospital got blocked and Professor just walked out in the rain, got a ladder, climbed onto the roof and started clearing the gutters. He got soaked to the skin.

“A man who didn’t know him arrived with a horse and looked up and asked – ‘Do you know where I can find Professor Hutchins mate?’ You can imagine how flabbergasted he was when the reply ‘I’ll be there right down!’”

The Australian Turf Club has named the Race 4 at the Kensington Track on Wednesday 2nd October ’19 the ‘Vale Professor Hutchins Handicap’.