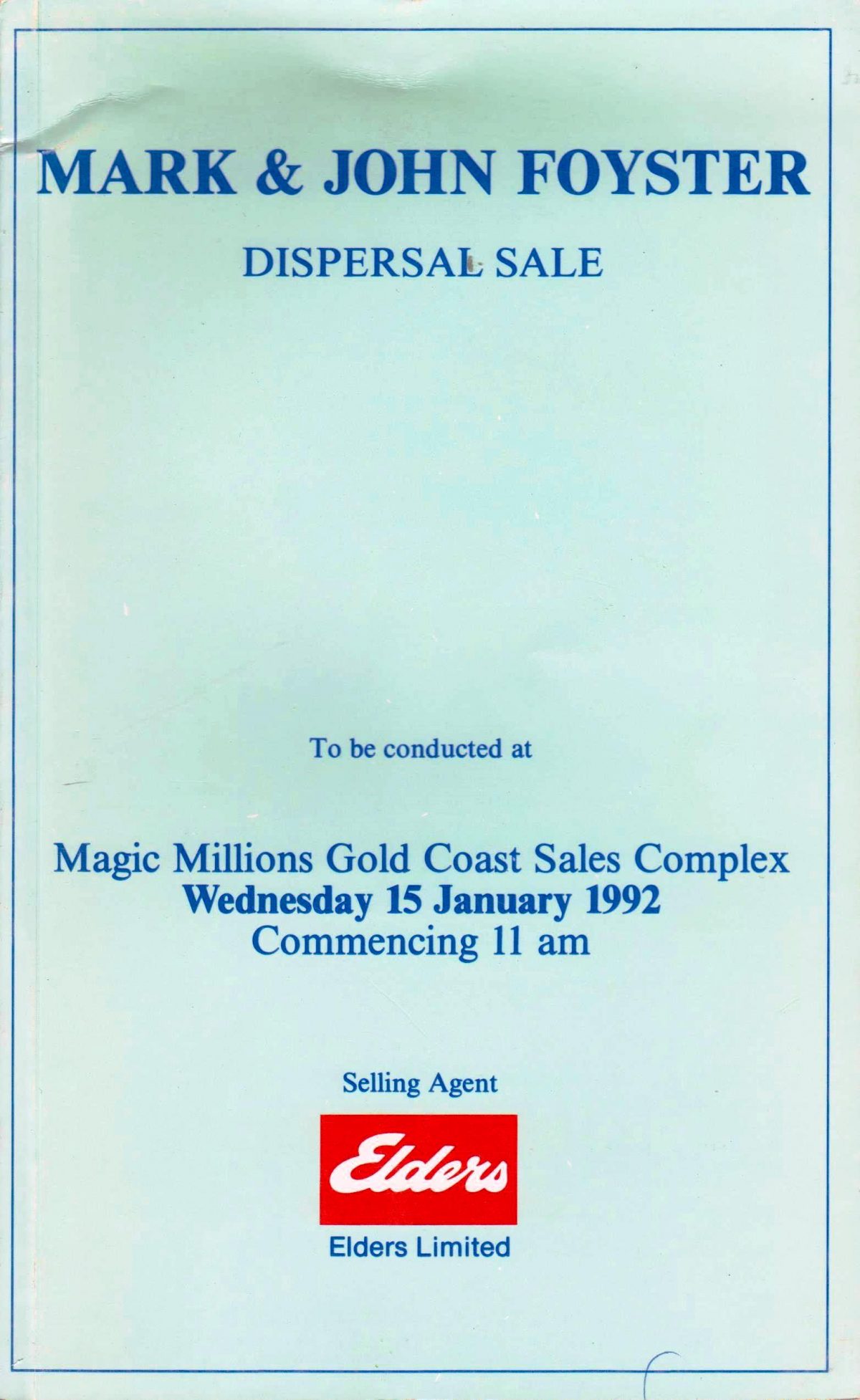 The ‘Fabulous Foysters’ burst upon the Australian Racing Industry like an old fashioned gold rush of the 19th century. Perhaps a stock market ‘Poseidon Adventure’ boom might be more apposite? Bill Casey called it ‘taking racing by storm’. In their case it was a rutile fortune and not gold. Three of the brothers, the sons of ‘old Jack’, developed thoroughbred studs: Lloyd with ‘Gooree’ at Mudgee, John ‘Guntawang’ at nearby Gulgong and later Mark at ‘Balfour’, Jerrys Plains (formerly ‘Carrington’). The final dispersal sale of the interests of Mark & John at the Magic Millions Gold Coast Sales Complex on Wednesday 15 January 1992 brought down the conclusive curtain call on the quixotic Foyster saga. It lasted for a bare 25 years?

Journalist Malcolm Brown hit the nail on the head with his hagiographic obituary to Lloyd Foyster which appeared in the Sydney Morning Herald on the 16th January 2012: ‘Breeder with a taste for risk’

‘Breeder with a taste for risk’

Lloyd Foyster, son of a one-time country bare-knuckle boxer and hairdresser, John ”Jack” Foyster, joined his father in the wild, high ride of business success, accumulated millions of dollars, followed his father into the racehorse industry and won three Caulfield Cups in four years. Then, when an ambitious resort development went sour – brought about on his claim by bank action – he was ruined. But he left so much behind, including a highly developed Gooree horse stud at Mudgee, which the horse breeder Robert Sangster once described as one of the top 10 horse studs in the world. He left a legacy of high-flying entrepreneurship – having helped his father develop the mineral sands wealth of northern NSW and Queensland – and a story of dash and daring.

Lloyd Foyster was born on September 2, 1934, at Murwillumbah, one of four sons of Jack, who was then a farmer, and Olga (nee Easterbrook). Foyster went to school in Kingscliff, on the far north coast of NSW, near his family’s property at Cudgen. His father would take Foyster and his brothers to Mudgee, where he went prospecting for gold. When Lloyd was about 10, his father recognised the potential of the ”black sands” on the local beaches and he applied for leases on beachfront land. He then began to extract the mineral sands, initially using a horse-drawn scoop.

Foyster left school at 15 to help the family stockpile the sands. In the mid-1950s, the Foysters began prospecting the high dunes of North Stradbroke Island. In 1961, Lloyd Foyster married a nurse, Jacqueline Kerr. The couple had five children: David, Robyn, Anne, Louise and Jane.

Foyster discovered rutile at Tallow Beach at Byron Bay. In 1965, the family floated Consolidated Rutile Ltd to work the leases on Stradbroke Island and in 1967, floated Cudgen RZ. The two Foyster-controlled companies then owned 20 per cent of the east coast rutile and zircon production. The family took its mining interests further through Tasmanian Titanium, which mined zircon on King Island.

Jack Foyster, flush with money, and his sons began to invest heavily in racehorses. Foyster, along with brothers Mark and John, established studs. Foyster’s was the 1520 hectare Gooree Stud at Mudgee. In February 1967, the family made its first foray, at the New Zealand yearling sales. In March of that year, it paid an Australasian record price of $39,900 for a colt at the Sydney yearling sales.

The Foysters also bought English bloodstock yearlings. In December that year, the family bought the trainer Jack Denham’s stables and premises and retained Denham to handle its private sales. In January 1968, it went on a $218,250 buying spree at the New Zealand national yearling sales. The newspaper columnist Bill Casey said the Foysters seemed intent on ”taking racing by storm”. Lloyd Foyster said: ”If you want the best, you’ve got to pay the most.”

In April 1968, the family paid $171,400 for 13 yearlings at Newmarket in Queensland and announced that Bart Cummings would train some of them. By then, Tommy Smith had horses at their stables and Neville Begg and Arthur Ward had joined the ranks of the family’s trainers.

In 1969, the family sold their shares in their mining companies to Mineral Securities Australia Ltd, for what was then a fortune, $13.1 million. Lloyd Foyster won millions in horse racing but lost it all after investing in a country resort.

Jack Foyster recounted the days when the family had exploited the ”fabulous black stream” of beach sand. Now, he said, he was unable to calculate accurately the family fortune. In April that year, Lloyd Foyster bought five of the best mares in Australia, including Wenona Girl, which was to tally 33 race wins.

But the year 1973 was not a happy one. His marriage broke up, though he and Jacqueline kept in touch. Clive, another brother, made a multimillion-dollar investment in a town he created in north Queensland, Lakeland, which was intended to service a huge rural industry he thought he could establish. But the project failed and he went bankrupt.

The family’s investment in racehorses paid off, in the form of champions such as Just Ideal, Our Planet, Double Century, Stylish Century, John’s Hope, Ming Dynasty and Mighty Kingdom. Ming Dynasty, co-owned with Jacqueline, Bart and Valmae Cummings and Ron and Hildegard Websdale, won the Caulfield Cup in 1977. In 1979, Foyster sold Gooree Stud to Eduardo Cojuangco of the Philippines for $3 million and took his former wife and his children to America, stopping to buy seven yearlings at Kentucky’s Keeneland and Saratoga sales.

Mighty Kingdom, owned by Foyster and his brother John, won the Caulfield Cup in 1979, and Ming Dynasty won the race for a second time in 1980. That year, Foyster’s top sire, Planet Kingdom, broke its leg and in an effort to save it, the University of Sydney built the country’s first equine floatation tank.

The horse could not be saved, but Foyster made a generous donation to set up a fund for the equine department at the university’s veterinary science facility. He took out a training permit in March 1984, and launched himself as an owner-trainer.

That, perhaps, is where he should have stopped. In 1985, Foyster’s company, Country Properties, took out a huge loan – on one report $15 million – denominated in Swiss francs from ANZ to build a five-star resort, Country Paradise, at Mudgee. ”My Country Paradise resort will give this wine-producing area further identity,” he said. He provided a personal guarantee to the bank. But the project ran into difficulties. The Australian dollar plunged, interest rates increased to more than 20 per cent, and the company’s debt blew out. In 1990, Country Properties started proceedings against ANZ seeking damages for what it said was negligent advice. In May 1991, the company went into receivership with debts of about $11 million.

Foyster’s daughter Robyn said her father had taken on the banks in a ”David and Goliath” encounter and kept fighting for what he believed to be justice even when he had no funds left. In February 1992, Foyster told a creditors’ meeting that he was living on an invalid pension of $304 a fortnight and had only $100 in a bank account. The creditors wanted their money back and in 2002 there were news reports that the trustee in bankruptcy was trying to get the solid gold replicas of the Caulfield Cup. In 2003, the NSW Supreme Court approved the liquidator of Foyster Holdings Pty Ltd to sell all the shares the company held in Tasmanian Titanium.

His resort dream shattered, Lloyd Foyster returned to the far north coast of NSW where it all began. He died of prostate cancer at Tweed Heads on November 24. He is survived by two of his brothers (Clive having predeceased him), his five children and five grandchildren. His last request was that his ashes be scattered at places dear to him, including a hill above the beloved stud that had been the centre of his life.