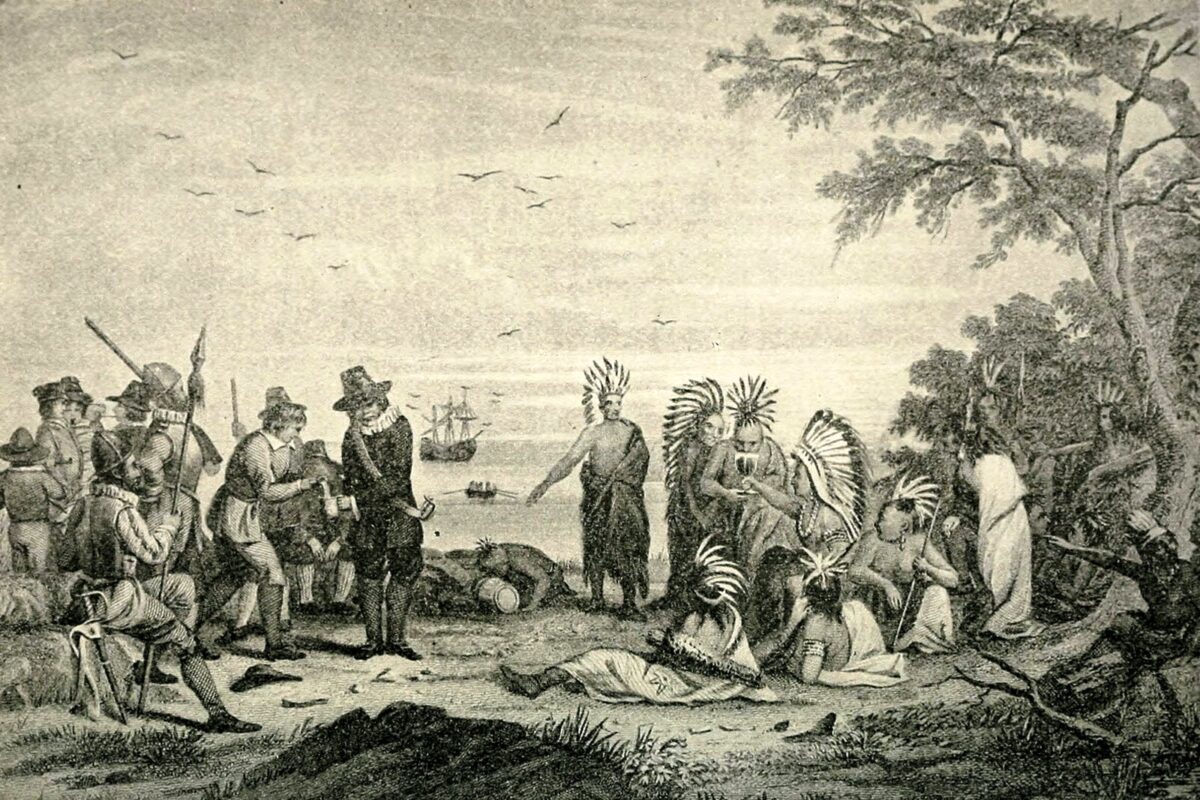 The Puritan Pilgrims at Plymouth (1620) had considerable early admiration for the local Wampanoag people and had an understanding that these friendly and cultivated natives – who were decidedly helpful to the nervous strangers now in their midst – had a particular reverence for land they had clearly been using for a very long time, and with evident sophistication for agriculture.

“Massasoit, the great sachem of the tribe, described their feeling for the land beneath their feet. The land, he declared, was ‘our mother’, nourishing all her children, beast, birds, fish and all men; the woods, the streams, everything on it belongs to everybody and is for the use of all. How can one man say it belongs to him?” ‘Land’; How the Hunger for Ownership Shaped the World; Simon Winchester; William Collins 2021; pp 129 – 130

Massasoit, (born c. 1590, near present Bristol, Rhode Island, U.S.—died 1661, near Bristol), Wampanoag Indian chief who throughout his life maintained peaceful relations with English settlers in the area of the Plymouth Colony, Massachusetts.

Massasoit was the grand sachem (intertribal chief) of all the Wampanoag Indians, who inhabited parts of present Massachusetts and Rhode Island, particularly the coastal regions. In March 1621—several months after the landing of the Mayflower at Plymouth—Massasoit journeyed to the colony with his colleague Samoset, who had already made friendly overtures to the Pilgrims there. Convinced of the value of a thriving trade with the newcomers, Massasoit set out to ensure peaceful accord between the races—a peace that lasted as long as he lived. In addition, he and his fellow Indians shared techniques of planting, fishing, and cooking that were essential to the settlers’ survival in the wilderness. When Massasoit became dangerously ill in the winter of 1623, he was nursed back to health by the grateful Pilgrims. The colonial leader, Governor Edward Winslow, was said to have travelled several miles through the snow to deliver nourishing broth to the chief.

Massasoit was able to keep the peace for many decades, but new waves of land-hungry Europeans created tension as the Indians’ native land was steadily taken over by the whites. When he died, goodwill gradually dissolved, culminating in the bloody King Philip’s War (1675), led by Massasoit’s second son.

‘On Wisdom, Down Under’

In late November 2018, a group of aboriginal fire crew members were found conduction a traditional coldfire burn close to a country town even farther south of Sydney. A few days beforehand this community had suffered horribly from a disastrous blaze which had torn through three thousand acres and destroyed more than a hundred houses. But where the indigenous teams were working, five miles away, teams were patiently using their ancient techniques on a stretch of unburned gum-tree woodlands, setting small fires here and there to clear away the underbrush, smearing the fire into the underbrush, stamping out the flames if they ever became too intense, and doing so with amazing Zen-like calm. No shouting, no panic, no heavy machinery. Just a shaggy-bark firelighter and a sense of casual purpose, each member of the team seemingly working at one with the woodlands, at one with Nature.

One young aboriginal firefighter, George Aldridge, spoke almost lovingly of the surrounding landscape as he applied his torch to patches of grass here and there, watching the flames grow and then die away, after which he would sift through the warm black soil left behind and imagine how soon fresh grasses would grow back.

‘I love land management and looking after my land’, he said, kneeling among the wisps of fresh and fragrant blue smoke. ‘The land is my mother, our mother, and she looks after us, and so it is only right that we should look after her.’

Except that all too often, we do anything but.