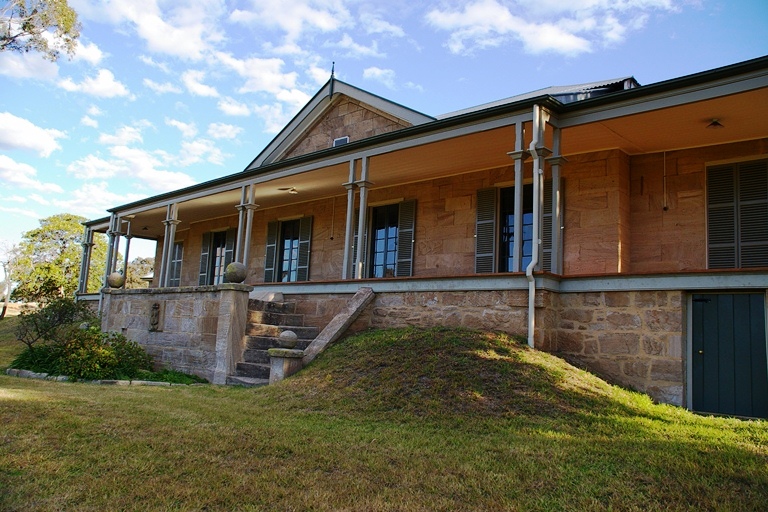 In November 1844 Governor Sir George Gipps and Lady Gipps made a visit to the upper Hunter River district.

With their entourage, they travelled from Aberdeen, passed through St. Aubin’s and proceeded  to the parsonage at Scone. Here they inspected the church and proceeded to the court house where several gentlemen of the district were in waiting to receive them with a suitable address. His Excellency made a brief reply and remained about twenty minutes before driving off in the directions of Mr. Docker’s ‘Thornthwaite’, calling on his way at John Bingle’s ‘Puen Buen‘.

The Governor arrived at ‘Thornthwaite’ in the afternoon with the intention of leaving Lady Gipps there while he and a few gentlemen proceeded over the Cedar Brush to ‘Warrah’ to ‘have a peep at the Liverpool Plains‘; however the Governor became seriously indisposed while at ‘Thornthwaite. He was confined to his bed where he remained until he was well enough to make the journey home.

Governor Gipps would have been well cared for here as Joseph Docker had long ago qualified as a medical practitioner, having being apprenticed when he was 13 years old. He had previously been engaged by the East India Company and arrived in Australia as Surgeon Superintendent of the female immigrant ship David Scott in October 1834.

The ‘Australian Dictionary of Dates & Men of the Time‘ gives an account of his life – ‘ Joseph Docker has spent a large portion of his life in this country having lived chiefly on his estate near Scone in the Hunter river district. He was once a candidate for election to the Legislature but was defeated. He was, however appointed a Member of the Upper House. Mr. Docker was made Postmaster-General in the first Martin Administration, in January 1866; and just before the close of that Administration, in September 1868, he was appointed Colonial Secretary.

The Australian Dictionary of Biography presents a more detailed account.

Joseph Docker (1802-1884), surgeon, landowner and politician, was born in London, the second son of Robert Docker, merchant, and his wife, née Perry. At 13 he left school and was apprenticed to Dr Thomas Docker of Dover, whose daughter Agnes he married in 1830. He joined the East India Co. as a surgeon, but resigned and went to Sydney in 1834 with his wife and son. He took up 10,000 acres (4047 ha) on Dartbrook in the Upper Hunter district, naming the estate Thornthwaite. His wife died in childbirth in 1835 and Docker went to Britain where in 1839 at Edinburgh he married Matilda Brougham. He returned to Sydney with his wife, two female cousins, a farmer and several artisans. At Thornthwaite for thirty years he worked as a grazier and cultivator and practised his profession. He became a justice of the peace in 1842 and later chairman of the bench of magistrates at Scone. After responsible government he contested the Phillip, Brisbane and Bligh seat in the Legislative Assembly; he was defeated by a neighbour, John Robertson, but in May 1856 was appointed to the Legislative Council for five years. In 1861 when Robertson’s free selection before survey bill reached the council Docker was a leading critic in the majority which opposed the measure. The government attempted to ‘swamp’ the council at its last sitting but the president and most members marched out leaving no quorum. When the first life appointments to the new Legislative Council were listed Docker’s name was omitted and the land bill was passed in his absence. In 1863 he was appointed to the council by James Martin, in whose second ministry he became postmaster-general in January 1866 and colonial secretary in September 1868. As representative of the government he successfully piloted Parkes‘s public schools bill through the Legislative Council against strong opposition. From December 1870 to May 1872 he was postmaster-general in the Martin-Robertson coalition. In February 1875 when he became minister of justice and public instruction the Miners’ Advocate described him as ‘the weak point in the [Robertson] ministry’s armour … given to old fogey-ism and a desire to retard rather than advance good legislation’. However, he held office until the government was defeated in February 1877 and was then chairman of committees in the council until 1884.

Among his achievements Docker composed many songs, some of them published in England, painted in oils and water-colour, and was his own architect of Thornthwaite where he did much of the cabinet work and carved the family coat of arms on the façade of the stone steps at his front entrance. He was also an early enthusiast for photography and made most of his chemicals and apparatus. A friend once described him as the most accomplished gentleman in the colony. Docker died at his home in Sydney on 9 December 1884, aged 82. He was survived by a son of his first marriage and one daughter and six sons of the second, of whom Ernest, the eldest, became a District Court judge.

The Findlay family took over ownership of ‘Thornthwaite’ for the next 100 years. The property earned a justifiably high reputation for wool production, beef cattle and especially top class working horses. Both Jackie and Bobby Palmer honed their skills while employed on the property; skills which projected them to the pinnacle of the sport of camp drafting in Eastern Australia.

Sadly a number of Findlay males were decimated during military service in WWII. They eventually relinquished ownership at the nadir of the recession of the 1980s.

The New South Wales district of Scone is home to the beautiful 6666 hectare Thornthwaite. It was here that the first wine grapes in the district were planted in the early 1800s. Current custodian Paspaley is only the third owner of this historic property. For several generations it was the home of the Findlay family. The original owner was Joseph Docker. The property provides the breeding ground for 2000 head of quality Hereford beef cattle producing up to 900 steers and 900 heifers each year.

The Thornthwaite property was a remarkable time capsule, and Paspaley has undertaken significant restoration to the range of historic buildings on the property, including a sandstone homestead, cottages, stables, a woolshed, a dairy and a winery. The historic Thornthwaite church is still in use today as well as the cemetery.

A cricket match this weekend in the NSW Hunter Valley will pay homage to an historic photo of the sport first being played in Australia.

In 1860 on the paddocks stretching in front of the Thornthwaite property in Scone, a seemingly-ordinary cricket match got underway.

The property was owned by Joseph Docker, who was also a keen photographer.

It was then that Mr Docker took a photograph of his sons playing in the match on the front paddock in the homestead.

The image has become an important photo in the history of the sport in Australia. In the years since it was taken, the Mitchell Library in Sydney has verified that the shot is one of the earliest known images of cricket in Australia.

This weekend, a cricket match will be held in the same location, raising money for charity.

“Thornthwaite was a property established by Joseph Docker back in the 1840s,” said the match organiser, Anne Davies.

“He built this most magnificent stone mansion, rather like the mansions of Double Bay and Point Piper [in Sydney]. He built a country residence, but it could be very closer to Sydney Harbour by the looks of its appearance.

“It’s still in excellent condition, [and] it’s such a special place to have a cricket match.”

This weekend’s match is raising money for the Scott Memorial Hospital in Scone.

“Dr Scott (who the hospital is named after) was also a cricketer, and in the 1880s during his medical studies, he led the Australian team matches in England at the time. [He] finished medical studies after that,” said Ms Davies.

The organisers of the charity cricket match are hoping to raise around $1,000 for the hospital.

The cricket match begins at 9am on Sunday, November 23rd at Thornthwaite, Scone. The launch of the Upper Hunter Cricket History book will begin at 10.30am.