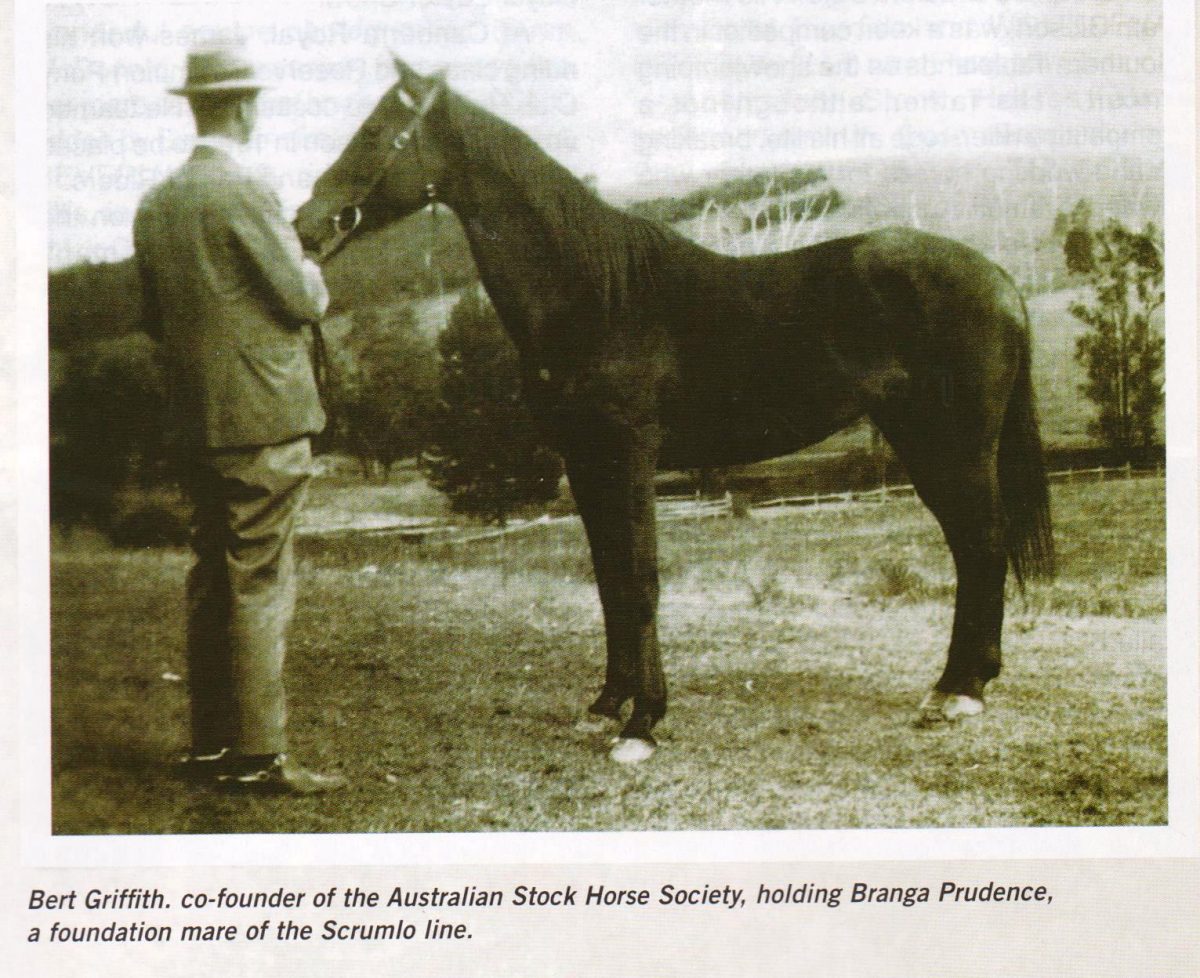 Bert Griffith’s father managed Branga Plains at Walcha for W H Mackay Snr. Following the sale of the property in 1929 the Griffith family removed to the Mackay family home at ‘Anambah’ neat Maitland. ‘Young Bert’ shifted to Scrumlo, Rouchel Aberdeen NSW; also in Mackay family ownership. He was instructed to bring two horses with him. The best of these was Branga Prudence, by TB sire Port Rush out of Gentle Annie.

‘Branga Prudence’ established herself as a foundation mare of the iconic Scrumlo line of Australian Stock Horses. She announced herself to the community with a brilliant if unexpected win in the Open Handicap at a bush race meeting at Rouchel; ‘unexpected’ because she appeared to Brian Brooker to be grossly underdone? Bert’s daughter Mary Griffith remarked that bush race meetings were a passion for her father. He and his brother Jim were highly successful. Mary explained that nearly all the Branga horses were thoroughbred because of the flatter country around Walcha. Most of them were by Port Rush or Secundas.

At Scrumlo Bert Griffith shared the single accommodation with another great local horseman, Reg Watts. The latter achieved immortal fame through his association with the legendary campdraft mare ‘Norma’. By the 1930s Bert Griffith was Manager of Scrumlo for F K ‘Darby’ Mackay establishing a friendship which lasted for over 50 years; ceasing only with the advent of Bert’s death.

Bert Griffith was fundamentally instrumental in the very beginning. He corresponded with Alex Braid of Wellington and together they forged a series of meetings culminating in the founding of the Society. Both men were motivated to ‘preserve the breeding and identity of our Australian Stock Horses’. The inaugural meeting was convened at the Belmore Hotel, Scone in March 1971 to test the support they had for this idea.

The first General Meeting was held at the Sydney Royal Easter Show in April 1971. RAS of NSW Ringmaster J K ‘Ken’ Mackay chaired this meeting. A steering committee of 18 men was set up. Bert’s daughter Mary Griffith was appointed inaugural Secretary/Treasurer. The first ‘Head Office’ of the Society was the shed at the back of Mary’s residence in Main Street, Scone. Later a garage was purchased in Kelly Street and converted into a purpose built Head Office. Mary also served as Secretary of the Scone Race Club at about this time which is where I first made her acquaintance. Our friendship endured.

Founding Member Bryant Gavin of ‘Wansey’, Cumnock was elected as foundation President of the Australian Stock Horse Society. In 1973 both Bert Griffith and Alex Braid were inducted as the first Honorary Life Members of the Society.

PTO: Handwritten on the back of this typed letter Mr Wootton has stated:

“We have two very promising ‘Biscay’ 3-year olds in Melbourne called ‘Bletchingly’ and ‘Grinstead’. When I saw them almost 18 months ago I asked Angus Ao not to harm or Race them until they were fully developed three-year-olds.

We do not have any Biscay two year olds in training. I believe you know why.”

The letter written by Mr S T Wootton in 1974 ostensibly buttresses the prevailing philosophy of the leading breeders of the day. It was aimed at achieving individual ‘qualitative’ excellence; possibly at the expense of ‘commercial’ or ‘quantitative’ success in terms of numbers? This was typical of STW. See also:

Stanley Wootton achieved deserved legendary status with his importation of Star Kingdom. Interestingly ‘Bletchingly’ was the only champion sire he actually bred. ‘Bletchingly’s sire Biscay proved to be an outstanding sire of sires with two champions Bletchingly and Marscay. Biscay started only 8 times in his life and had strictly limited books of mares beginning his stallion career at three different studs: Baramul 1969 (19 mares); Segenhoe 1970 and Bhima 1971. He also became an outstanding brood mare sire with only half the representation (on the racetracks) as his contemporary Star Kingdom sire son Kaoru Star. For all his success at Woodlands’ George Ryder never ‘hosted’ a champion sire. It wasn’t until Lonhro appeared later that this was anomaly was redressed; albeit by that time the latter had relocated to Darley Stud, Kelvinside, Aberdeen.

END_OF_DOCUMENT_TOKEN_TO_BE_REPLACED

I’m greatly intrigued when a sports journalist, albeit an educated and erudite one, liberally quotes one of the arguably greatest International Economists of the 20th Century? Maynard Keynes had possibly one rival in the Western World in John Kenneth Galbraith?

Roy Masters is no slouch himself and is the product of a multi-talented family of genuine polymaths. Maynard Keynes was a member of the ‘Bloomsbury Set’ in peri-WWI in London. He boasted unusual early proclivities but eventually married Lydia Lopokova , a Prima Ballerina in Diaghilev’s ‘Ballet Russe de Monte-Carlo’. I question she would have been to Roy Master’s taste but then Roy was more ‘Sydney Push/NRL’ and Germaine Greer/Clive James than ‘Bloomsbury’. However I’ve no doubt he could have communicated effectively with the likes of other ‘Bloomsberries’; Virginia and Leonard Woolf, Vanessa Bell, Aldous Huxley, Roger Fry and perhaps even Lytton Strachey + Dora Carrington? Duncan Grant? However I digress.

I especially liked Roy’s analogies in the following ‘masterpiece’. Read on.

END_OF_DOCUMENT_TOKEN_TO_BE_REPLACED 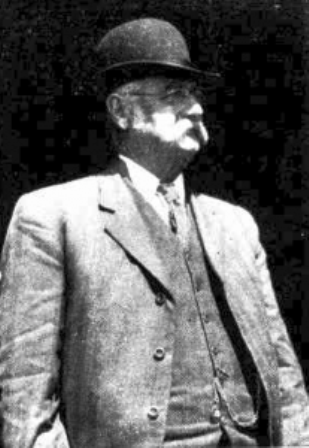 There is little doubt that the original pioneer leviathans of thoroughbred breeding in the Hunter Valley were Charles Reynolds (1806 – 1871) and his son Frank Reynolds (1848 – 1920). The latter was a close confidante of the ‘Gentle Giant from Clarence Town’ Bruce Lowe. Together they formulated the seminal tome ‘Breeding Racehorses by the Figure System’. No-one tells the story better than Ian Ibbett; so I’ll leave the detail to him.