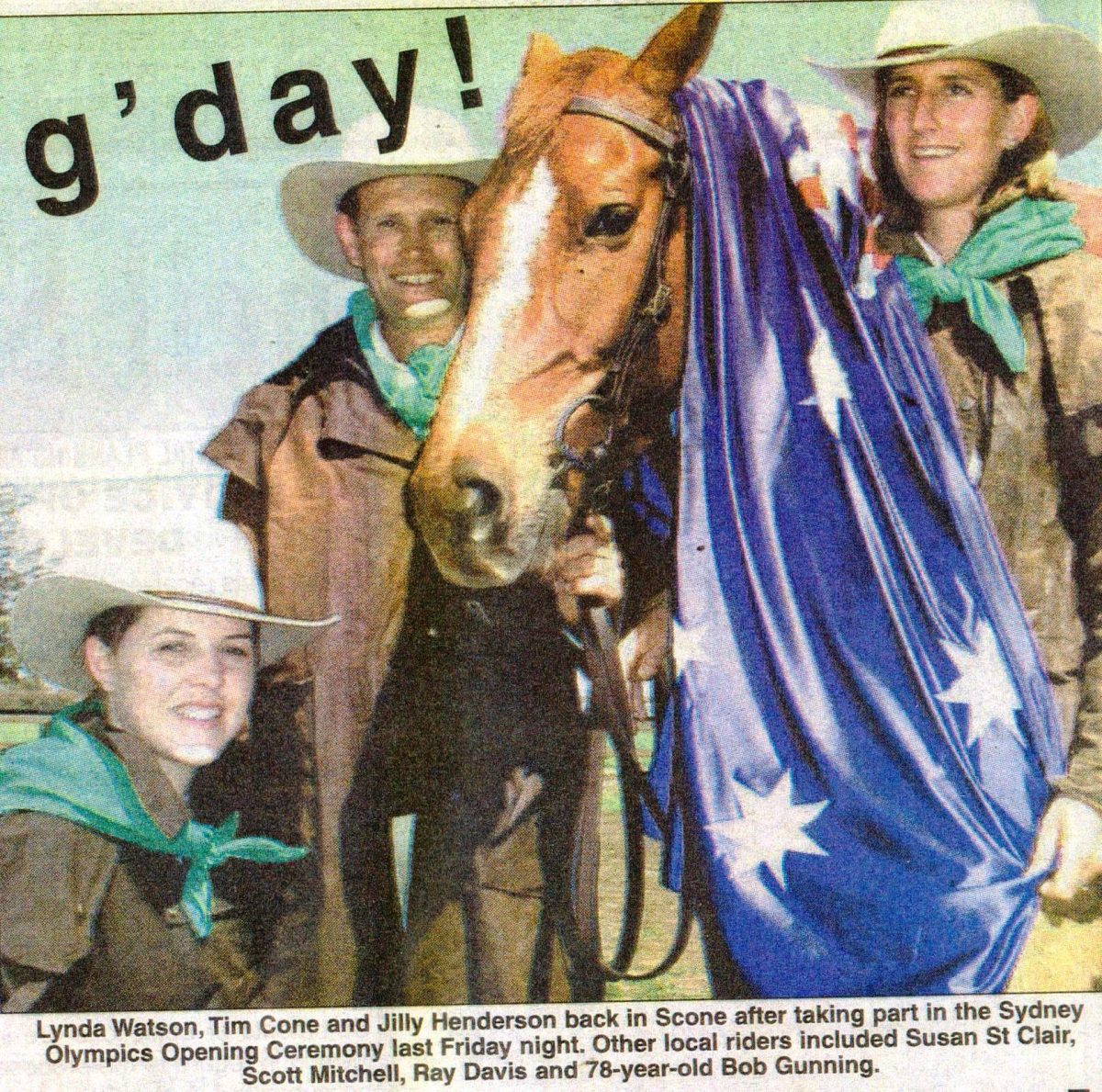 They were told to keep thee mouths shut but now they’re telling all.

Tim Cone, Jilly Henderson and Lynda Watson were three of 120 riders who performed with their Stock Horses in the spectacular welcome to the Olympic Opening Ceremony last Friday (15/09/2000).

A year ago they answered a call in the Australian Stock Horse Journal to do “something big” – but they weren’t sure what.

“They said it was some try-out for the and our first boot camp was at White Park for three days in March,” Tim said.

“Then an official letter in April and we still didn’t know.”

The next three-day rehearsal in June still had the riders looking like a mob of sheep – hopeless.

But – with instruction from Mounted Police Sergeant Don Eyb and horseman Tony Jablonski it all started to come together.

“We just about trashed White Park with five Olympic Rings indented in the ground form all the practice,” Jilly said.

“We had to carry pretend flags made of scraps of calico.”

Some riders dropped out – it was all too hard. The rest included stockmen, dressage riders, polocrosse riders and even one-armed Pat Kelly.

On September 4 the selected 140 riders and their horses went to Castle Hill – about 45 minutes’ drive from the Olympic Stadium – for 11 days straight intensive training and rehearsal.

Going into the Stadium every day in a convoy of 60 vehicles was tiring – it was definitely no party.

But the Olympic Ceremony on Friday night made it all worthwhile – and did they perform!

“I was crying but I just couldn’t stop smiling,” Lynda said.

There could be no more Australian welcome than a thundering charge, a roar of hooves and a shouted bush greeting…..welcome to the Sydney Olympic Games.

In what the Scone-based Australian Stock Horse Society has surprisingly billed as “the worst kept secret in Scone”, the secret was in fact kept for more than five years.

Rehearsals at White Park in the past 12 months and unannounced visits to Scone by SOCOG members went unheeded as preparations proceeded.

Everyone involved had to sign a confidentiality agreement to keep their lips buttoned.

Led into the Opening Ceremony stadium by a single rider, the 120 Stock Horses and their riders with Olympic, and later Australian, flags held high represented Australia’s rich equestrian background.

They performed Olympic rings to music from Australian film ‘The Man from Snowy’ River before welcoming the world to the Sydney Olympics 2000 with a rousing G’day.

In the stadium with tears of joy on his face was former executive manager of the Australian Stock Horse Society, Brian Brown who is credited with the idea of presenting the Australian equine breed at the Olympics Opening Ceremony.

Seven years ago when Sydney was first announced as the 2000 Olympics venue, Cr Brown did a feasibility study suggesting that the Australian Stock Horse be involved and he sent it to SOCOG.

A year later he was contacted by Opening Ceremony supremo Ric Birch who, despite his allergy to horses, agreed and the hooves were set in motion.

From its Scone base 12 months ago, the Australian Stock Horse Society started a selection process running form Albury in the south to Longreach in the Queensland.

An original 250 horses and riders were culled to the final 140 (including 20 reserves) who gave up a lot of time and energy at personal cost to train for the big Olympic Ceremony welcome.

The skills of the Australian Stock Horse are also being exhibited as “fillers” during the Olympic equestrian events at Horsley Park which, according to Cr Brown, has already prompted many enquiries about the breed.