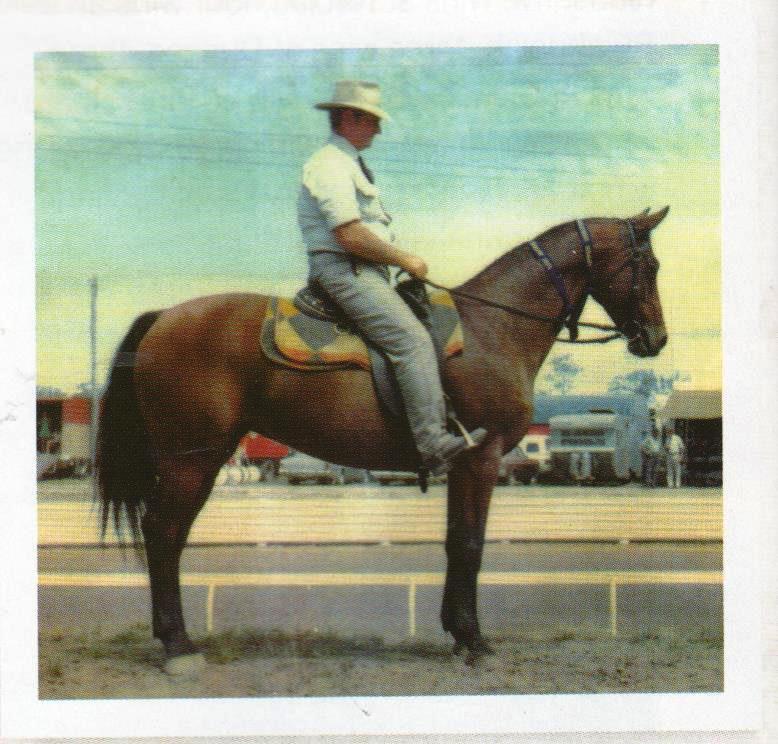 It is believed that Chan was the last colt sired by Radium. Foaled in 1945, Chan was bred by the legendary horseman and trainer of dogs, Frank Scanlon.

Knowing that his friend J G (Jim) Callinan wanted a Radium colt, Frank arrived at Glengarry Station one day, in a two horse float, with his good mate Witzy and a two month old colt foal at foot by Radium on board. Frank gave the colt to Jim Callinan, which was later named Chan, after Charlie Chan, a famous Chinese detective.

Jim always regarded Chan as the horse he would most have liked to breed himself. There was a bond between Chan and Jim Callinan, and the great horseman was able to educate Chan to do some great things, including getting him to jump a fence by putting his coat over the wire. A promising start to campdrafting – a win and a second from three starts – was curtailed when Chan drove piece of wood into his near hind coronet. This became a recurring injury.

Chan was by Radium and out of Witzy, a great cattle mare. Witzy was by Medlow. Radium out of a Medlow mare not only produced Chan but the other great stallions, Rayon, Radium’s Echo and Radium’s Call.

One of the greatest features of the Chan horses was/were the beautiful heads, the lovely headsets and the swan necks. This trait is still being produced in his descendants. A possible explanation for this can be found if we delve deeper into Cahn’s breeding. His mother Witzy was out of a part Arabian mare, and Cecil’s great grandfather, Dragoman was an Arabian stallion. Could this genetic cross have produced this amazing front? Another interesting connection is that Medlow’s great grandsire if Glenrock, and Cecil’s dam Meretha II was by Glenrock.

What is so amazing is that Chan never stood to outside mares. He was only used with the Glengarry mares, and was also lent to Dick Telfer of Gun Ridge, Merriwa, when Jim Callinan’s son Leo worked for Dick. Dick Telfer kept a colt by Chan, called RED RAY – FS, and Dick’s horses also became renowned for their beautiful fronts.