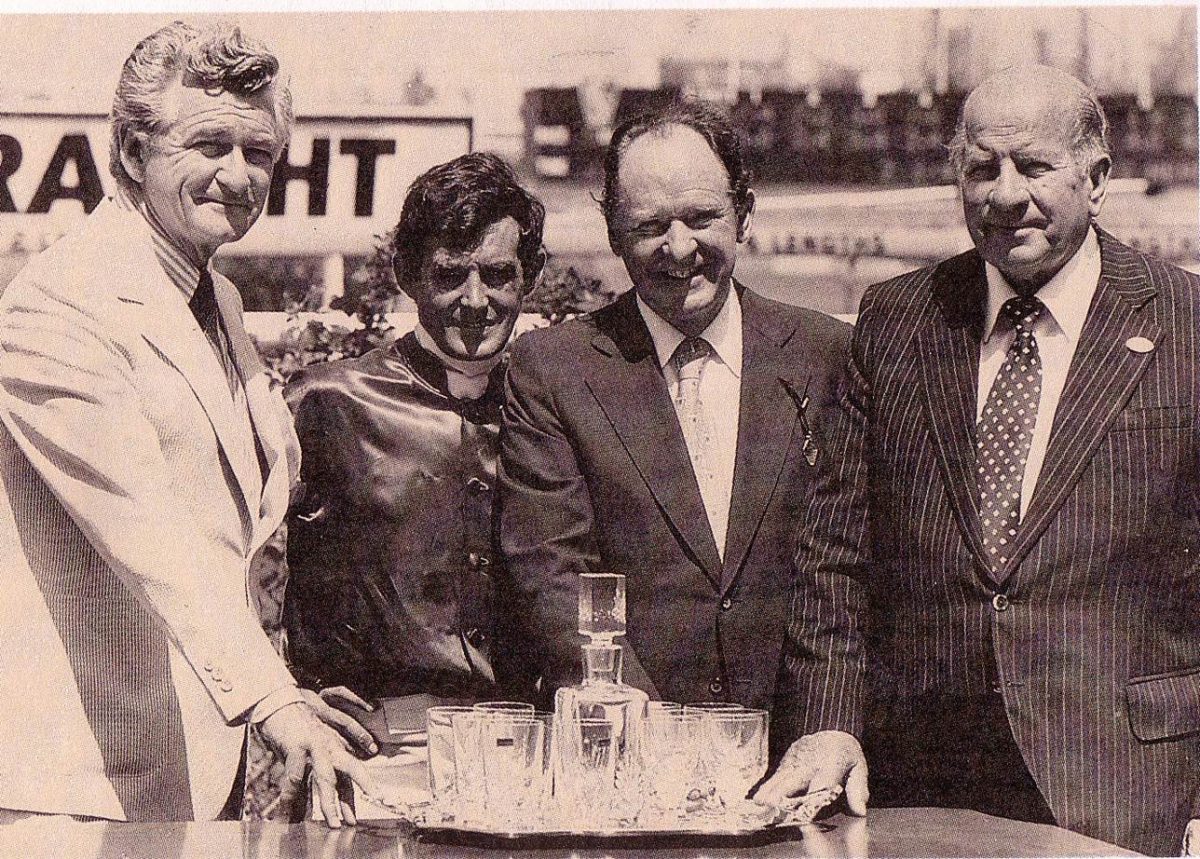 Training leviathan T J ‘Tommy’ Smith said that George Ryder was the best man for racing in his time. Who am I to argue? I know from a long professional association he was the most opportunistic, visionary, imaginary, inventive, innovative and enthusiastic administrator NSW Racing had in the second half of the 20th century. I submit the following official biography as proof of these assertions. I acknowledge and appreciate the source as cited. The stories are legendary; and only half the truth! The image depicts Prime Minister Bob Hawke, Jockey Neville Voigt, Trainer Tommy Smith and then STC Chairman George Ryder at a trophy presentation at Rosehill. It was an auspicious quadrella!

This article was published in Australian Dictionary of Biography, Volume 18, (MUP), 2012

George Edward Ryder (1905-1989), racing administrator, stud master and businessman, was born on 29 June 1905 at Tingha, near Inverell, New South Wales, fourth child of George Henry Ryder, tin-miner, and his wife Inez Evelyn, née Arentz, both born locally.  Brought up in a slab hut with a pressed-earth floor, George was educated at Nullamanna Public School, leaving at age 13.  He had a job transporting a dentist on his rounds on a motorcycle with sidecar.  In about 1928 he moved to Cessnock.  After driving a bus for a year he purchased one on time payment.  During the 1930s he bought out most Hunter Valley rivals and his business grew into Rover Motors Pty Ltd, with forty-five buses in a modern fleet.  He sold it in 1946 and invested in hotels, including Craigieburn Guest House, Bowral.

Gaining a pilot’s licence, Ryder expanded into aviation.  While operating from Mascot airport he befriended Sir Charles Kingsford Smith.  In 1939 he established the first passenger run between Sydney and Newcastle.  Later he sold his aviation assets to Australian National Airways Pty Ltd.  A talented amateur sportsman, he was an excellent tennis player and golfer, and also enjoyed billiards, shooting, polo and speedboat driving.  He was president of Cessnock tennis and rugby league clubs.

On 7 September 1932 at St Andrew’s Presbyterian Church, Cessnock, Ryder had married Dorothy Abbott Scott, a clerk.  He entered horse racing in 1937 when he purchased a colt that he named Jan, after their daughter.  Jan won at Newcastle and a smitten Ryder purchased more racehorses, which Bayly Payten trained at Randwick.  A later horse, his best, was also named Jan.  Trained by T. J. Smith, she dominated weight-for-age races at the 1953 Randwick Easter carnival.  Apple Bay, winner of the 1955 Doomben Ten Thousand in Brisbane, was another notable horse to carry Ryder’s colours of pale blue, red diamond and sleeves, and yellow cap.

In 1946 with several partners Ryder acquired Woodlands Stud Farm Pty Ltd at Denman.  By the 1960s, under Ryder’s management, it reputedly produced annually more individual winners than any stud in the world.  Newton Wonder, a very successful sire, was followed by the imports Pipe of Peace, Sostenuto and King of Babylon, and the Australian-born Sky High.  In 1970 Ryder sold Woodlands but almost immediately bought Kia Ora Stud Farm Pty Ltd at Scone.  He championed the use of Australian-bred thoroughbred sires there until 1977.

Ryder had been an honorary representative of the Ministry of Munitions in the Hunter Valley during World War II.  In 1943 the premier of New South Wales, (Sir) William McKell, wanted a representative from the area on the board of the new Sydney Turf Club.  The jockey Maurice McCarten suggested Ryder, who then began his thirty-seven-year tenure—an Australian record.  He served as treasurer (1943-47, 1963-72), vice-chairman (1972-77) and chairman (1977-80).

In the early 1950s Ryder advocated a rich race for two-year-olds to be run over six furlongs (1200 m) at Rosehill.  The Golden Slipper Stakes was first run in 1957; its novel title came from the answer that Ryder’s wife gave when asked the perfect present for a baby.  For the Slipper he insisted that fillies receive a seven-pounds (3 kg) handicap from colts, a kilogram more than customary in set-weights races.  Other new provisions included first acceptances paid in the year of mating, followed by second and third acceptance payments, and the option to pay an exorbitant late entry fee.  The Golden Slipper quickly became the STC’s signature race and is the only non-Melbourne contest among Australia’s ‘big four’ races.  Ryder did much to provide more feature-race opportunities for fillies and mares.

During Ryder’s time the STC introduced numerous innovations to Australian racing including, in 1946, transportable barrier stalls.  The photo-finish camera and saddlecloth numbers on jockey’s armlets soon followed.  The STC recommenced, after twelve years, metropolitan midweek racing in 1954 and also trialled bookmaker-free race meetings.  In 1970 Ryder established the successful Australian Racing and Breeding Stables Ltd, a not-for-profit syndication—Australia’s first—that made ownership possible for the non-wealthy.  In 1983 it became a public company; he resigned as chairman the following year.

A gregarious man, Ryder was of average height with fair skin and blue eyes.  His character was uncomplicated, down-to-earth, loyal, obstinate and humorous.  He was fond of using figurative language.  With little regard for ‘big noters’, he led the cause of ‘battlers’ in racing.  He helped to gain entry to official grandstands for non-member owners.  Although a member of the Anglican Church he was not a regular churchgoer.  Survived by his wife and their daughter, Ryder died on 18 May 1989 at Elizabeth Bay, Sydney, and was cremated.  The Group 1 race, the George Ryder Stakes, run at Rosehill, commemorated his services to racing.  His portrait (1978) by Judy Cassab is held by the STC.