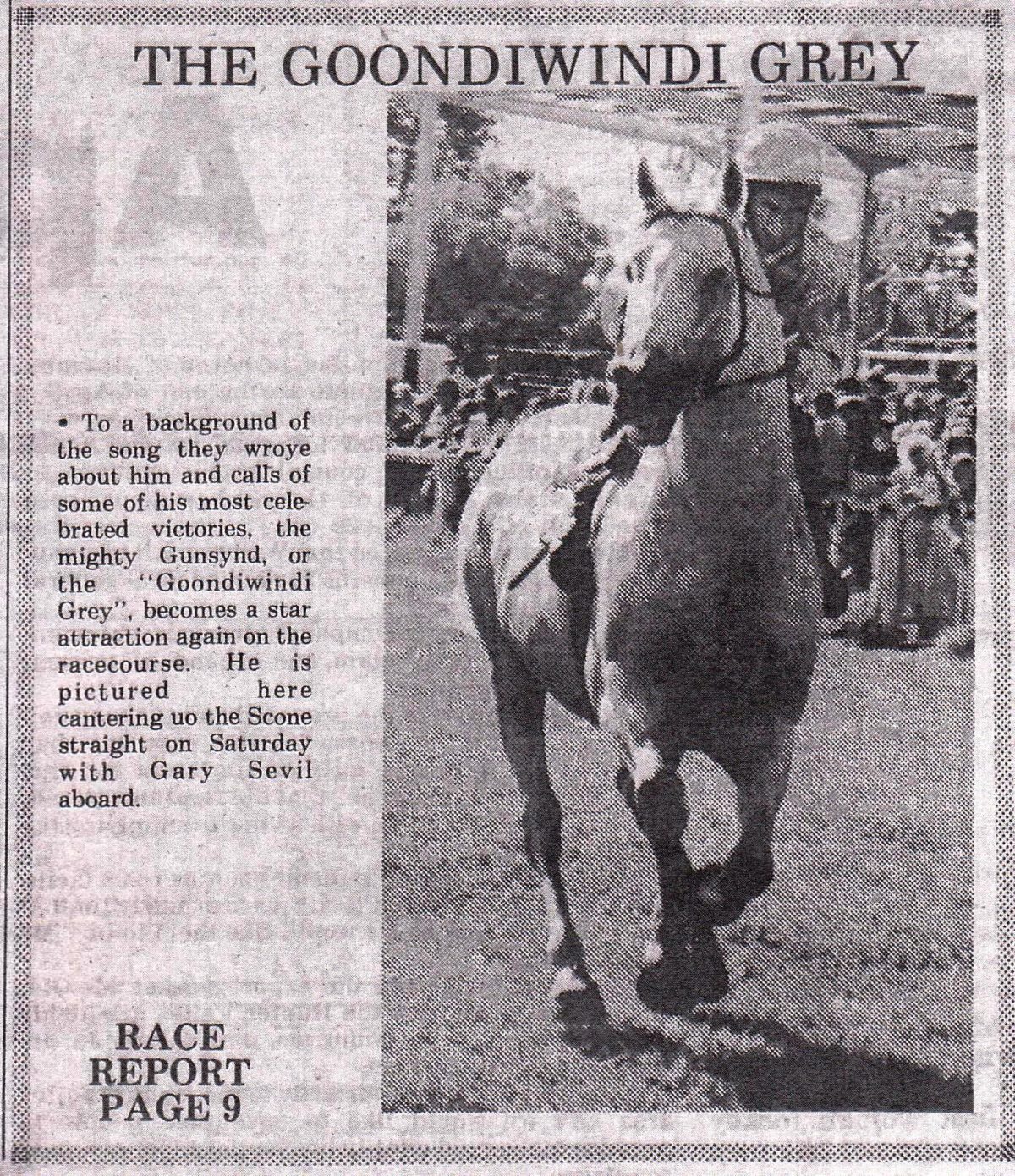 In another earlier ‘blog’ I wrote that Gunsynd’s last racecourse appearance was at the Scone Race Club’s Cup Meeting in May 1973. I was wrong! I should have known better.

We hosted the very popular Aberdeen Slipper Meeting at White Park Racecourse on Saturday 15th March 1980. By this time I was President of Scone Race Club, my good friend Hilton Cope was Vice-President and enthusiastic ‘organiser’ of the Aberdeen Slipper Meeting. The concept was a huge triumph and enduring success. I was actually searching the Scone Advocate Archive at the Scone & Upper Hunter Historical Society when I came across the detailed enthusiastic report on the meeting.

“A big feature of the afternoon at Scone was the appearance of 12-year-old Gunsynd, or as he was known to so many the ‘Goondiwindi Grey’.

“To a background of the song, the Goondiwindi Grey, and some calls of his great races, Gunsynd was cantered past the Scone winning post on several occasions by Gary Sevil.

“The horse, one-time Australasian stakes record holder, again put on a splendid show to the big crowd who flocked to the stands and the embankment to watch this equine idol go through his paces.

“That the horse could be brought from Kia Ora, his home stud, and ridden before a big crowd again, suggests his wonderful temperament.

“John Clift, the Kia Ora stud-master, said Gunsynd is one of the easiest horses to handle and a great character at home.

“He is having a good season as sire and has some smart two-year-olds about including Gun Drift, winner of three successive races. One of the races, a two-year-old handicap over 1000 metres at Eagle Farm, saw him home by 1 ¾ lengths and five lengths. He ran the distance in 59.1 (seconds)”.

Hilton Cope just reminded me he sold a set of Gunsynd’s shoes by auction on the day for ‘about $600’. I’m not sure either John Clift of Kia Ora Stallion man George Bowman knew anything about this? But who am I to argue 40 years down the track? There are/were a lot of old horse shoes at ‘Kelvinside’. Just musing?