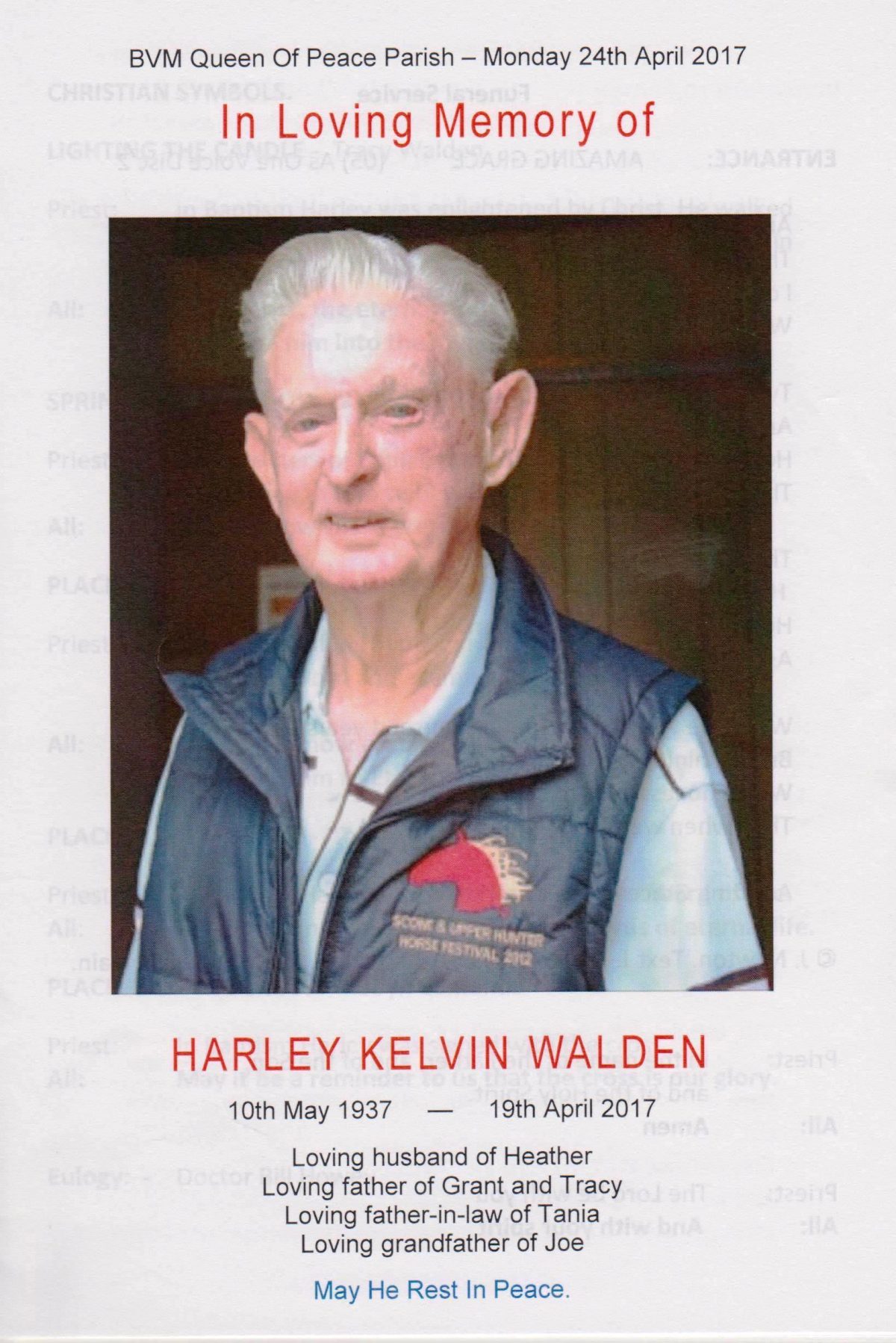 I had the honour of presenting Harley Walden’s eulogy at his memorial service on Monday 24th April 2017. Peter Snowdon and Tommy Ollerton were two of the pall-bearers. If it hadn’t been for Harley’s lifelong consuming passion for the thoroughbred industry and the Scone Race Club in particular much valuable history would be lost to posterity. Among many other attributes Harley was a prolific amateur journalist. He wrote and recorded more about the Scone Race Club than anyone else I know.

The family history I repeat here was not my own presentation but rather taken from his son Grant Walden’s handwritten notes prepared for my encomium.

Harley lived at Sledmere Stud most of his life

In Harley’s younger years he, like many others, rode a horse to school now known as Scone Grammar School

While attending school it was quite well known that he would ‘wag’ class so that he could attend the races; funny how things never changed

Having such an interest in horses, he left school at 15 and went to work with his father, Darcey, at Sledmere; and so he adventure began

His father having been well known for breeding top thoroughbreds, Harley followed in his footsteps and achieved many prizes for showing his favourites at the Royal Easter Show before they were later sold by Wm Inglis

Harley had a love of all sports not only horses, if he wasn’t playing he was at the ground supporting his favourites

Harley decided to play Field Hockey and as with his interest in horses, jumped head first in and devoted much of his personal time to sport

From playing in the local area, becoming a registered umpire and then treasurer of the Upper Hunter Hockey Association for sixteen years

Harley was very much the larrikin as a younger man and attended many a dance in the local area. His sweet talking style made him popular

In the late 50s Harley met Heather Nunn who had left her family home in Murrurundi to work in Scone, and some say Harley was smitten.

Harley proposed to Heather in 1961, apparently she said, ‘Yes’. They were married the following year in September 1962.

Four years later they decided to grow their family and along came Grant. All could have stopped here with his behaviour but Harley and Heather being the people they are decided to extend their family further so in 1971 along came Tracy, the apple of his eye.

Harley and his father Darcey, supporters of the Scone Thoroughbred Rugby League Team, the senior having played many a time. Harley was well known to support his other team Manly Sea Eagles and wear his shirt and cap with pride.