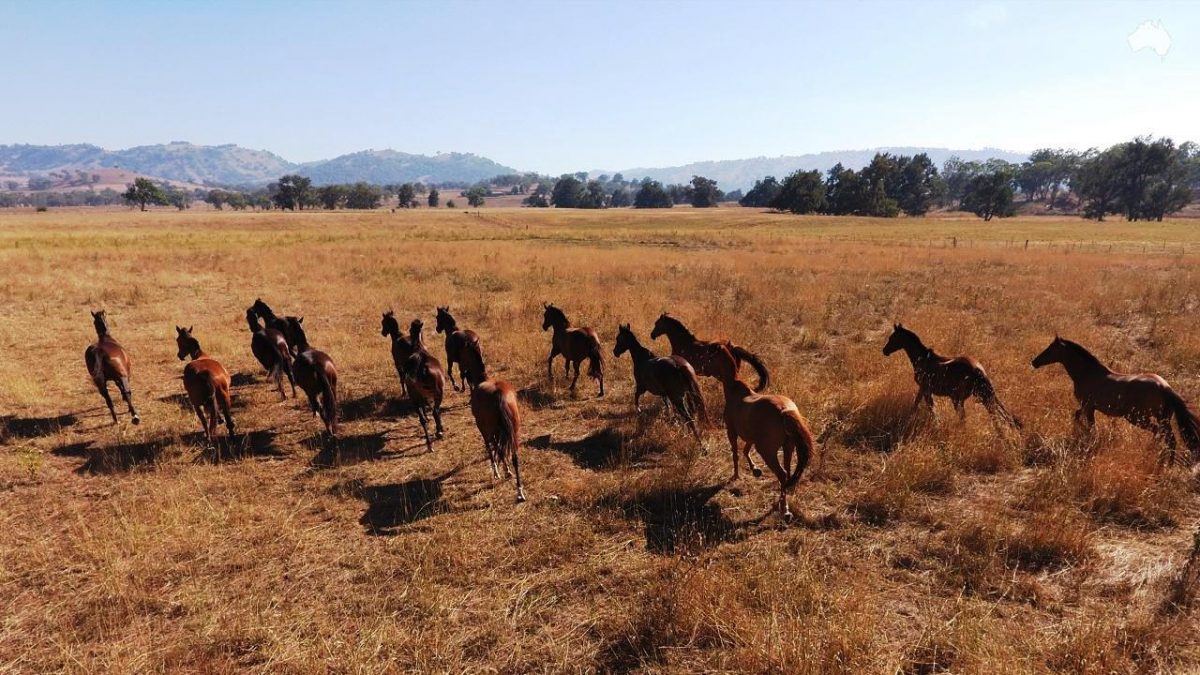 Horses of an Earlier Day

Haydon Horses at Bloomfield, Blandford allowed to run freely as there ancestors did in order to expand the faculty of exercise and enhance the facility of flight. Note the typical ‘dry’ conditions experienced in rural Australia. This is ‘ideal’ horse country and belies the obsession, in the minds of some, for horses on green grass as in the European (‘English’) mode.

Excerpt, Letter to the Editor, Scone Advocate, 3 March, 1961; Reprinted in ‘Mac Bridge; The Man and his Recollections’ by Heather Ashford and Margaret Ashford-MacDougall 1983, Scone and Upper Hunter Historical Society, 1983 Bi-Centennial Publication No. 2

About 2 years ago, through the columns of the Scone Advocate, I wrote mentioning outstanding qualities of a few utility horses whose owners were L E Wiseman of Gundy and Harold Doyle, who at the time resided at Invermien, Scone and a gelding bred at Segenhoe by the late Allan and Donald McDonald, that in the 1860’s fell into the hands of the bushranger Fred Ward, better known as Thunderbolt.

Also, a horse owned by the late Bab Haydon, of Bloomfield, Blandford, who won five races in one day at Jerrys Plains. The latter I believe could claim thoroughbred descent, he being by Tester, sire of those good full brothers, Harvest Home and Gentleman Jim, they being by Tester, dam a Somnus mare.

Omission was made to mention a couple of exceptionally good horses that could claim to have descended at least on the sire’s side from thoroughbred stock. There was Butler, bought in Central Queensland at the end of last century for the princely sum of £17 by Jack Almond, who led him behind a sulky to his home at Denman. Following the sulky probably prepared Butler for a role he was late called on the fill.

This great horse, Butler, who was the winner of sixty seven races between Sydney and the Queensland border.

The first time the writer saw Butler was in 1901. He was being driven in a sulky through Blandford, heading north for the two day meeting at Murrurundi. The sulky was loaded with horse feed, rugs and camping gear, it being the owner’s custom to camp with his horse.

Butler won two races at the meeting. This would be the meeting at which Titania, a gelding owned by Jack Brodie, at the time stock inspector living at Murrurundi, won four races.

Also at the same meeting, a gelding, Brolga, by Albatross, bred at Martindale and owned by the late Harry Kenny, ridden by Syd Elwell, was killed in a race by hitting the end of the running rail with his chest. Two lengths of rail went right through the horse. Brolga died on the spot, the rider speared head first along the rail for a couple of panels and got off with only a scratched face.

At this time the course was very dusty, evidently obscuring the rails from both the horse and rider, who was running in the ruck. The accident happened near the finish of a six furlong race.

Returning to Butler, to show what a kind and even tempered horse this great son of The Butler was, the return from Murrurundi coincided with the holding of the Muswellbrook Show. Butler was entered for and competed in the ladies’ hack event. Ridden by the wife of the owner, Mrs Almond, riding side-saddle, it was awarded the blue ribbon. Evidently crowds had no effect on Butler.

Another one brought up in the hard school was Piallah, a grey stallion by an AJC Derby winner, Charge, son of Carbine. Piallah was owned, trained and raced by J J McGivney, of Blandford, in the first and second decade of the present century.

The colourful old James, who was at the time well past the seventieth milestone of life’s journey, rode the horse in his working gallops, mostly along a metal road between two mile pegs, taking the time on a watch held in his hand. Some of his friends said it was alarm clock he carried!

No such conveniences as floats in Piallah’s time. The horse was ridden or driven in a sulky by his owner, carrying training paraphernalia from home to various race meetings. At times Piallah was called on to prove his sex before a night’s lodgings at various places could be secured for the horse and owner.

Piallah was the winner of a number of races, well above the twenty mark, and it was said that with anything like fair treatment should have been among the first class horses of his day. This grandson of Old Jack, as Carbine was mostly known by those near him, would hardly know what the inside of a stable looked like. His stable was mostly of the post and rail yard type, or tethered to a wire fence.

The late Bob Haydon, of Bloomfield, Blandford, also owned a property, Warrah Ridge, in the Quirindi district. It was his custom to go and stay at Warrah Ridge during shearing operations. He would do the journey in a buckboard drawn by four horses. On one of these trips, in 1901, among his four in hand was a gelding by Tester, named Splash. Although he looked to have a fair amount of draught blood in him, it ws said he could run a quarter of a mile in about twenty four seconds.

On the road Mr Haydon met a carrier with a horse team. Of course, the conversation turned to horses. During the talk a challenge was issued and accepted. So Mr Haydon took the harness off Splash whilst the teamster unharnessed a grey gelding form his team, and a quarter of a mile race was run. The grey horse taken from the team was the winner. This so impressed Mr Haydon that he made inquiries as to the breeding. This horse was by Cooper, son of Gipsy Cooper; dam unknown to the writer.

Mr Haydon lost no time in purchasing the sire, Cooper, in hopes that his stock would cross well with the Tester blood. Result of this venture is unknown to the writer.

Today little is known of the utility horses such as stock, draught and coaching types. One writer in The Australasian Post of October 11, 1956, writes:

“Looking at the almost horseless streets, and perhaps even more horseless highways today it is hard to conceive the fact that in 1870, the peak of the coaching era, Cobb and Coy. Alone were harnessing 6000 horses a day, and that their coaches were travelling an enormous daily mileage, through Queensland, New South Wales and Victoria.”

That mentions only one coaching venture. Add to this the number of horse who were at harness and saddle work in the towns and cities, and the countless horse teams that travelled throughout the countryside. Also the number of stock and farm horses in use. It should not be hard to realise that the part the horse played in Australia before the advent of the motor vehicles, which did not make itself felt till towards the end of the 1920’s.

To older generations it si not hard to realise why the horse was known as one of man’s best friends, and that the horse was at times cartooned and written off as ‘The Horstralian Idol’.