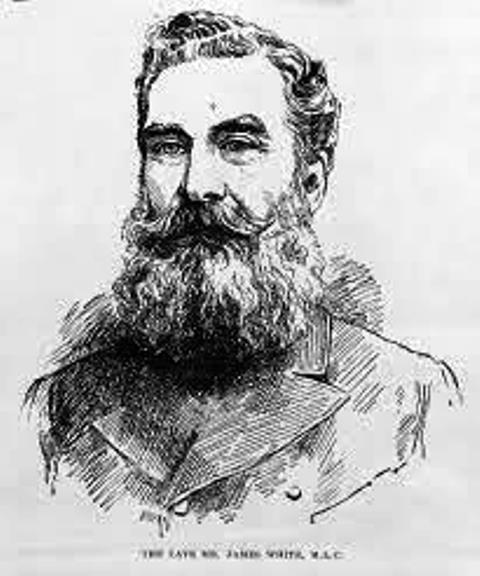 I have written elsewhere about the Honourable James White form the famous pioneer ‘Belltrees’ family here in the Upper Hunter. My very good friend Sam North wrote this for me at the time of our Melbourne Cup extravaganza at Scone in October 2010. I called this a ‘Colloquium of Cups’ and it appears earlier in my ‘blog’. I thought it was worth repeating here as a ‘stand-alone’ feature. It is a remarkable story about a remarkable man. Read on!

Somehow I appear to have lost your original email (something to do with technology and age, I assume), but I managed to find the information re James White, the founder of Belltrees. White took over the family properties at the age of 16, following his father’s death and expanded the empire from Bowral into the upper Hunter and New England.

He won two Melbourne Cups, in 1877 with Chester and in 1883 with Martini-Henry. Both were three year old colts and both landed huge wagers for White.

Chester won the AJC Sires Produce Stakes and the Champagne stakes as a two-year-old, after which White, an AJC committeeman, bought him for 2000 guineas.

At his first start for White, Chester finished second in the AJC Derby. He then won the 10 furlong Mares Produce Stakes before heading to Melbourne, where he won the Victoria Derby, in the process becoming equal favourite with Savanaka for the Melbourne Cup.

The bets were collected by White’s commission agent, Septimus Stephens, outside the Old Exchange in Melbourne in full view of the public. A crowd variously estimated at between 500 and 2000 watched as Thompson counted out 100 pound notes to Stephens. As the tally grew the crowd started chanting the count with the two men and a huge cheer rang out when 200 was reached. Stephens had engaged the famous boxer Jem Mace to escort the money to the bank, paying him 25 pound for his trouble – although another report said Mace was paid ‘’a suit of clothes’’.

White and his friends were credited with winning 70,000 pounds on Chester.

Chester was trained by the great Etienne de Mestre.

De Mestre would also have trained Martini-Henry. He trained the colt as a two-year-old but because of the horse’s delicate constitution did not race him. By the time Martini-Henry was ready to race de Mestre was elderly and in ill-health so recommended that he be given to Michael Fennelly to prepare.

White bought the colt as a weanling foal when, on a visit to New Zealand, he saw him in a paddock and offer 1000 guineas. The breeder said it would bring 1500 guineas at sale so the two split the difference and the colt changed hands for 1250 guineas.

Martini-Henry was due to make his debut in the AJC Derby, for which he was pre-post favourite, but was withdrawn with a respiratory ailment. He was then taken to Flemington for the carnival.

Before arriving in Melbourne White had two bets – 10,000 pounds to 200 pounds and 10,000 pounds to 500 pounds – on Martin-Henry winning the Cup but after the colt won the Victoria Derby (winning a further 2000 pound wager for White) at his first race start he became the 5-1 favourite for the Cup.

He won that by two lengths and for good measure backed up the following Saturday to win the mile and a quarter Mares Produce Stakes before being spelled. Thus his first three starts resulted in wins in the Victoria Derby, the Melbourne Cup and the Mares Produce Stakes over distances of one and a half miles, two miles and a mile and a quarter and over the course of just eight days.

Martini-Henry won one more race, the 1884 VRC St Leger, before breaking down in the 1884 Caulfield Cup. He became a success at stud.

White was one of the real giants of the Australian turf. Between 1877 and 1885 his horses won two Metropolitans, six Derbys, two Oaks, three Sires Produce Stakes, four VRC Maribrynong Plates, three St Legers and the Australian Cup, in addition to the two Melbourne Cups.

In all he won 11 Derbys and between 1883 and 1889 of the 14 runnings of the AJC and Victoria Derbies White-owned runners won nine.

The Hunter Valley’s other Melbourne Cup winners have all come from lower in the Valley. Lord Cardigan (1903) and Lord Nolan (1908) were both owned by Maitland’s John Mayo. John Brown, the Newcastle coal millionaire, won with Prince Foote in 1909 while his brother William won with Piastre in 1912. The following year Maitland’s James Chambers owned and trained Posinatus won.

The only other Hunter winner was the great Peter Pan, which was owned and bred by Rodney Dangar at Baroona Stud near Singleton and which won the 1932 and 1934 runnings of the Melbourne Cup.

Bill, I can give you more information on the other Hunter winners but I gather you are mainly interested in James White.

Give me a yell if you want anything else.

Hope all continues to go well with you, Sarah and the kids and hopefully we will be able to get together for a beer in the not too distant future (and hopefully it is not at Patrick’s funeral).

Ogilvy Public Relations Worldwide Pty Ltd is a member of the WPP Group of Companies – our code of business conduct can be found on www.wpp.com.

Please consider our environment before printing this email.