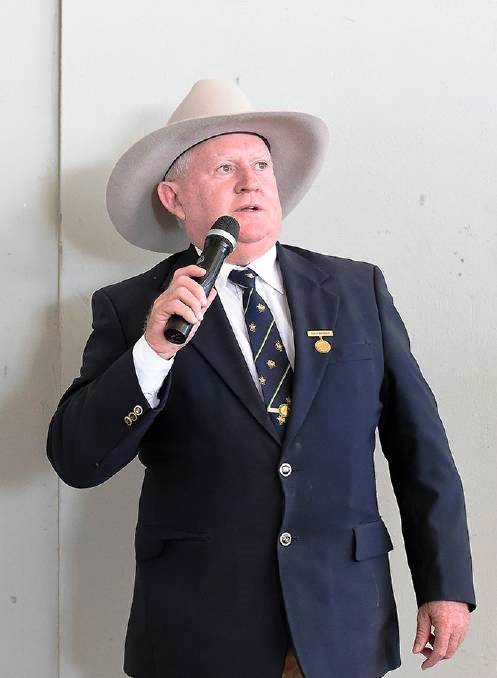 I learned at my memoir writing course there are at least three elements to scripting: compilation, composition and collation. You can add a fourth: cheating! My mantra is to plunder plagiarize and purloin where possible. I think others call it ‘sourcing’? It works! A young journalist was employed at the Scone Advocate for a number of years. She had the advantage of being brought up in a rural environment (Rouchel) and was fully apprised of bucolic genre, culture and creed. She understood country people. She may not have been the most ‘literate’ of scribes but she could recite a tale well. Her piece-de-resistance was the introduction of personal (‘community’) profiles in the ‘Advocate’. She did it very well. I was the lucky subject of one myself.

I have ‘chosen’ the article written by Caitlin Andrews about my good friend and local identity Jim Callinan. I think it is well worth retelling in this context. I haven’t altered a word. Jim is a local legend; at least in Wingen the home of ‘Wingen Whine’! I have shared many ‘social adventures’ with Jim both locally in Scone (Horse Festival) and at the Sydney Royal Easter Show (RAS of NSW).

‘Callo’ calls it as it is

Good friends and a good laugh have been common in Jim Callinan’s life, as like his dad Leo, he maintains they are two things you can’t have enough of in life.

Jim Callinan doing what he loves most, broadcasting at the Scone Campdraft on the weekend.

There wouldn’t be many people in the Upper Hunter that haven’t heard of Jim, and if they don’t know him they would have heard his voice, being one of the well-known local broadcasters in the area.

A born and bred Wingen resident, Jim is the oldest local resident of the small village, but he’s not that old.

Being the youngest of four sons and two daughters of Leo and Mary Callinan, Jim started school at Wingen Public School until year 2 when he started at St Mary’s Primary School and then completed his education at Scone High School.

Like many young fellows in those days, once finishing school Jim joined his father to work the property of ‘Glengarry’ and continued working there as a stockman for the next 11 years.

He said he initially wanted to join the police force when he left school, but was too short.

His love for the horse is a passion that was more than likely bred into him, but his years working on the land further ingrained his enjoyment of working with horses, cattle and dogs, something he still does today as a stock agent at Ray White Taylor.

A short stint driving trucks in the mines for three and half years was enough to remind Jim he preferred to work on the land, and in 1994 he started as a livestock agent at Pitt Scone and Keene in Scone, later to become Elders Scone.

After nearly two decades, last October Jim resigned from Elders to work with a fellow he has known since the day he came into the world, Dean Taylor, at Ray White Taylor.

There is not many regional saleyards Jim hasn’t been to, and he’s seen a lot of land and met a lot of good country folk throughout the years, which he has really enjoyed.

When it comes to hobbies, the horse is number one, and Jim says people used to say in the early days that they rode on the sheep’s back.

“Well I’ve had a very good ride on a horse’s back,” Jim said.

The horseman’s interests in polocrosse, stock horses and campdrafting have taken him to every state of Australia.

He has never missed a Scone and Upper Hunter Horse Festival Parade since he took over from Jack Johnston 40 years ago and has been leading the parade on a signature grey horse since.

Jim joined the horse festival committee in 1983 with his key role being one of the people to organise the annual parade; however this year was his last as he feels it is time for new blood.

He has been to every Sydney Royal Easter Show since his first 40 years ago, when he was just 15 and went with Jack and Bob Palmer as their strapper at the old Moore Park Showground.

The broadcasting great has announced the campdraft, polocrosse and stock horse classes at the show for the past 14 years, has broadcasted the Australian Stock Horse Society Nationals for the past 20 years and two World Cup polocrosse carnivals.

In the saddle, Jim believes he was very lucky when starting to compete as his father had some good horses that he could just get on and go.

He pays tribute to three favourites – Dinah, Kathleen and Dot – who he believes taught him more about riding than anyone else could have.

Being a long time member of the Australian Stock Horse Society Hunter Branch, Jim competed at branch level stock horse events, played polocrosse from about 1980 until about 20 years ago, first for the Muswellbrook Club and then Bunnan, and campdrafted.

As a stock horse inspector, Jim is responsible for ensuring horses are eligible for registration and he was also one of the key organisers in assembling the 1000 horses and riders to welcome the Olympic Torch to Scone in 2000.

It was fellow well-known Murrurundi broadcaster Brian Hunt who kicked Jim off in the announcer’s box suggesting he give it a go back in 1983, and since then he hasn’t put the microphone down.

Jim said he was lucky enough to get a good kick off by a good bloke, and that is something he has always been grateful for.

Jim spent last weekend doing what he loves – broadcasting the Scone Campdraft among friends and horses – something he has done numerous times in the past.

Throughout the years, he has been involved in many committees including the Scone Campdraft and Wingen Campdraft committees, the Park Trust at Wingen, Wingen Hall committee and many more, however these days he simply helps out wherever he is needed.

Being a useful source of information and knowing many of the identities of the industry, Jim was also on the original committee of the Roughriders and Campdrafters of Yesterday and Today.

Jim and his partner, Cheryl Brown, are regular faces at many community events supporting organisations where they can, including the Westpac Rescue Helicopter Black Coal Ball in Muswellbrook where Jim has conducted the auction for the past 14 years.

When asked what keeps him going, Jim said he believes everyone has got to do something, and he is lucky as the things he has been involved in, have made for good times and allowed him to meet good people.

“You’ve got to help people in life, if you help organisations they will donate money back into the local community,” he said.

Jim’s work and commitment hasn’t gone unnoticed as he has been duly recognised being awarded life membership of the Australian Bushman’s Campdraft and Rodeo Association Hunter Zone and Bunnan Polocrosse.

He was awarded a special award for services to the Australian Stock Horse Society at the 2013 Annual General Meeting, was the Scone and Upper Hunter Horse Festival VIP in 2006 and received the 2012 Sutton Farm Award for Community Service.

Jim said he has made so many good friends through the horse industry and will always live by his dad’s two mottos:

“There is no better therapy than a cold beer, good company and a good laugh” and “one thing you can never have too much of is good friends, because you never know when you’ll want them”

Jim Callinan Champion of the RAS of NSW 2018

THE Royal Agricultural Society of NSW (RAS) will award Scone’s Jim Callinan with an esteemed Champion of the RAS honour at this year’s Sydney Royal Easter Show 2018.

Every 12 months, the RAS acknowledges and celebrates individuals who have made an outstanding contribution to the Sydney Royal competitions and the industries they represent.

All 15 recipients will be celebrated at a private function on Friday, March 30, with RAS dignitaries and industry representatives joining them to commend their achievements and many years of service.

After attending the Sydney Royal Easter Show for the first time in 1973 as a strapper, Mr Callinan was encouraged to try his hand at announcing.

He has now been calling the camp drafting, stockhorse draft, polocrosse and pony club zone events at the show for 35 years.

He’s also gone on to commentate at the Australian Nationals, events all over the country and two World Cups.

“I’m lucky to have had the support of seasoned announcers who played a big part in my ‘hobby’ that I enjoy so very much,” Mr Callinan said.

“There’s no better show to catch up with old friends and see the best of the best than the Sydney Royal Easter Show.”

RAS president Robert Ryan said Mr Callinan epitomised everything the show was about: Australia’s biggest celebration of the country’s people, practices and produce.

“The Sydney Royal Competitions are the cornerstone of the show and showcase the skill, energy, passion and produce from across rural NSW and beyond,” he said.

“The Champions of the RAS go beyond winning ribbons and trophies.

“Many have been a part of the show community for a significant part of their lives.

“The show would not be the world class event it is today without the dedication and tireless commitment from our exhibitors who are represented by the 2018 crop of Champions.

“With so many different components to the show, the award recognises those who aren’t necessarily in the spotlight.”

This year 32,000 entrants will compete across 42 competition areas and over 5500 competition classes, from livestock and domestic animals, to arts and crafts, and woodchopping.

“The support and knowledge the Champions bring to their events help make the Sydney Royal Competitions the best of their kind in Australia,” Mr Ryan said.