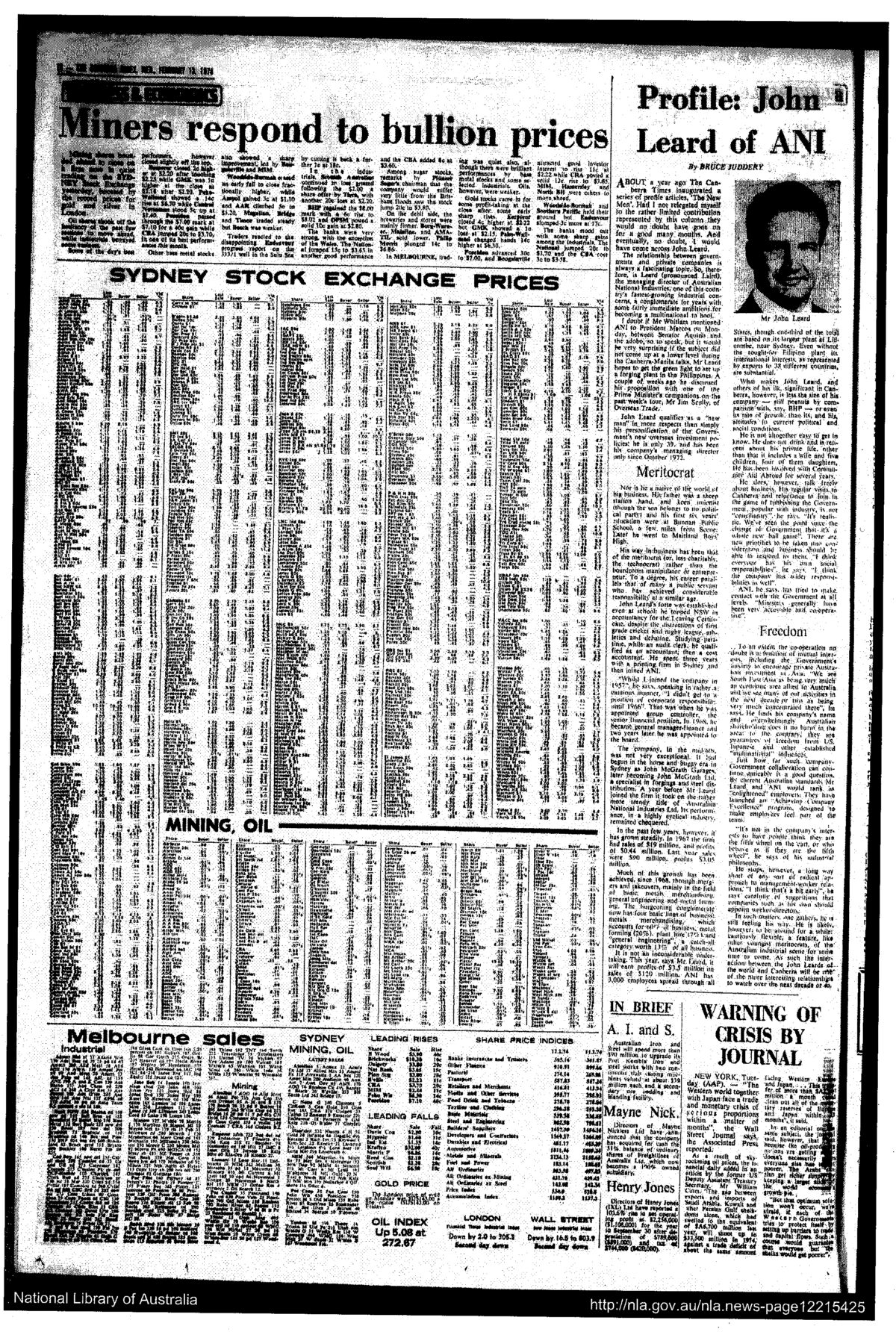 You can learn a lot in the front bar of the Belmore Hotel in Scone. At least that used to be the case. I really enjoyed my conversations with the late ‘rural polymath’ Geoff Palmer. Geoff had done most things in the bush as stockman, horse breaker, shearer, roustabout, thoroughbred trainer, cattle man, drover, shepherd, sale yards supervisor and everything and anything in between. One day the subject of early schooling cropped up. Raised at ‘The Cuan’, Owens Gap Geoff had attended the Bunnan Public School. He remarked that the smartest bloke in his class was John Leard, himself the son of a ‘Cuan’ sheep station hand. That awoke my immediate curiosity. Was it the same John Leard who became CEO of ANI? It was! I imagine the same meritocrat was the star alumnus of Bunnan Public School; but there may be others. Here is his story.

Geoff developed a lifelong habit of exploring the various vintages of Toohey’s Black. This could only be achieved from the bottom of a schooner glass. John Leard stuck to an abstemious temperance program. I gravitated to the former ostensibly to further my education.

ABOUT a year ago The Canberra Times inaugurated a series of profile articles, ‘The New Men’. Had I not relegated myself to the rather limited contribution represented by this column they would no doubt have gone on for a good many months. And eventually, no doubt, I would have come across John Leard.

The relationship between governments and private companies is always a fascinating topic. So, therefore, is Leard (pronounced Laird) the managing director of Australian National Industries, one of this country’s fastest-growing industrial concerns, a conglomerate for years with some fairly immediate ambitions for becoming a multinational to boot.

I doubt t if Mr Whitlam mentioned ANI to President Marcos on Monday, between Senator Aquino and the adobo, so to speak, but it would be very surprising if the subject did not come up at a lower level during the Canberra-Manila talks. Mr Leard hopes to get the green light to set up a forging plant in the Philippines. A couple of weeks ago he discussed his proposition with one of the Prime Minister’s companions on the past week’s tour, Mr Jim Scully, of Overseas Trade.

John Leard qualifies as a “new man” in more respects than simply his personification of the Government’s new overseas investment policies: he is only 39 and has been his company’s managing director only since October 1972.

Nor is he a native of the world of big business. His father was a sheep station hand, and keen unionist (though the son belongs to no political party) and his first six years’ education were al Bunnan Public School, a few miles from Scone. Later he went to Maitland Boys’ High.

His way in business has been that of the meritocrat (or, less charitably the technocrat) rather than the boardroom manipulator or entrepreneur. To a degree his career parallels that of many a public servant who has achieved considerable responsibility at a similar age.

John Leard’s forte was established even at school: he topped NSW in accountancy for the Leaving Certificate, despite the distractions of first grade cricket and rugby league, athletics and debating. Studying parttime, while an audit clerk, he qualified as an accountant, then a cost accountant. He spent three years with a printing firm in Sydney and then joined ANI.

”Whilst I joined the company in 1957”, he says, speaking in rather a cautious manner. “I didn’t get to a position of corporate responsibility until 1966 . That was when he was appointed group controller, the senior financial position. In 1968 he became ‘general manager – finance ‘ and two years later he was appointed to the board.

The company, in the mid-60s. was not very exceptional. It had begun, in the horse and buggy era in Sydney as John McGrath Garages later becoming John McGrath Ltd, a specialist in forgings and steel distribution. A year before Mr Leard joined the firm it took on the rather more trendy title of Australian National Industries Ltd. Its performance, in a highly cyclical industry remained chequered.

Much of this. growth has been achieved since 1968 through mergers and takeovers, mainly in the fields of basic metals; merchandising general engineering and metal forming (20%). The burgeoning conglomerate now has four basic lines of business: metals merchandising, which accounts for 60% of business; metal forming (20%), plant hire (7%) and “general engineering”, a catch-all category worth 13% of all business.

It is not an inconsiderable undertaking. This year, says Mr Leard, it will earn profits of $3.5 million on sales of $120 million. ANI has 3,000 employees spread through all States, though one-third of the total are based on its largest plant at Lidcombe, near Sydney. Even without the sought-for Filipino plant its international interests, as represented by exports to 38 different countries, are substantial.

What makes John Leard, and others of his ilk, significant in Canberra, however, is less the size of his company – still peanuts by comparison with, say, BHP – or even its rate of growth, than its, and his, attitudes to current political and social conditions.

He is not altogether easy to get to know. He does not drink and is reticent about his private life, other than that it includes a wife and five children, four of them daughters. He has been involved with Community Aid Abroad for several years.

He does, however, talk freely about business. His regular visits to Canberra and reluctance to join in the game of rubbishing the Government, popular with industry, is not “conciliatory”, he says. “It’s realistic. We’ve seen the point since the change of Government that it’s a whole new ball game”. There are new priorities to be taken into con sideration and business should be able to respond to them. “1 think everyone has his own social responsibilities”, he says. “I think the company has wider responsibilities as well”.

ANI, he says, has tried to make contact with the Government at all levels. “Ministers generally have been very accessible and co-operative”.

To an extent the co-operation no doubt is a function of mutual interests, including the Government’s anxiety to encourage private Australian investment in Asia. “We see South East Asia as being very much an economic area allied to Australia and w’e.sce many of our activities in the next decade or two as being very much concentrated there”, he says. He finds his company’s name and overwhelmingly Australian shareholding does it no harm in the area: to the contrary, they are guarantees of freedom from US, Japanese and other established “multinational” influences.

Just how far such company-Government collaboration can continue amicably is a good question. By current Australian standards Mr l.eard and ANI would rank as “enlightened” employers. They have launched an “Achieving Company Excellence” program, designed “to make employees feel part of the team.

“It’s not in the company’s interests to have people think they are the fifth wheel on the cart, or who behave as if they are the filth wheel”, he says of his industrial philosophy.

He stops, however, a long way short of any sort of radical approach to management-worker relations. “I think that’s a bit early”, he says carefully of suggestions that companies such as his own should appoint worker-directors.

In such matters, one gathers, he is still feeling his way. He is likely, however, to be around for a while: cautiously flexible, a feature, like other youngish meritocrats, of the Australian industrial scene for some time to come. As such the interaction between the John Leards of the world and Canberra will be one of the more interesting relationships to watch over the next decade or so.