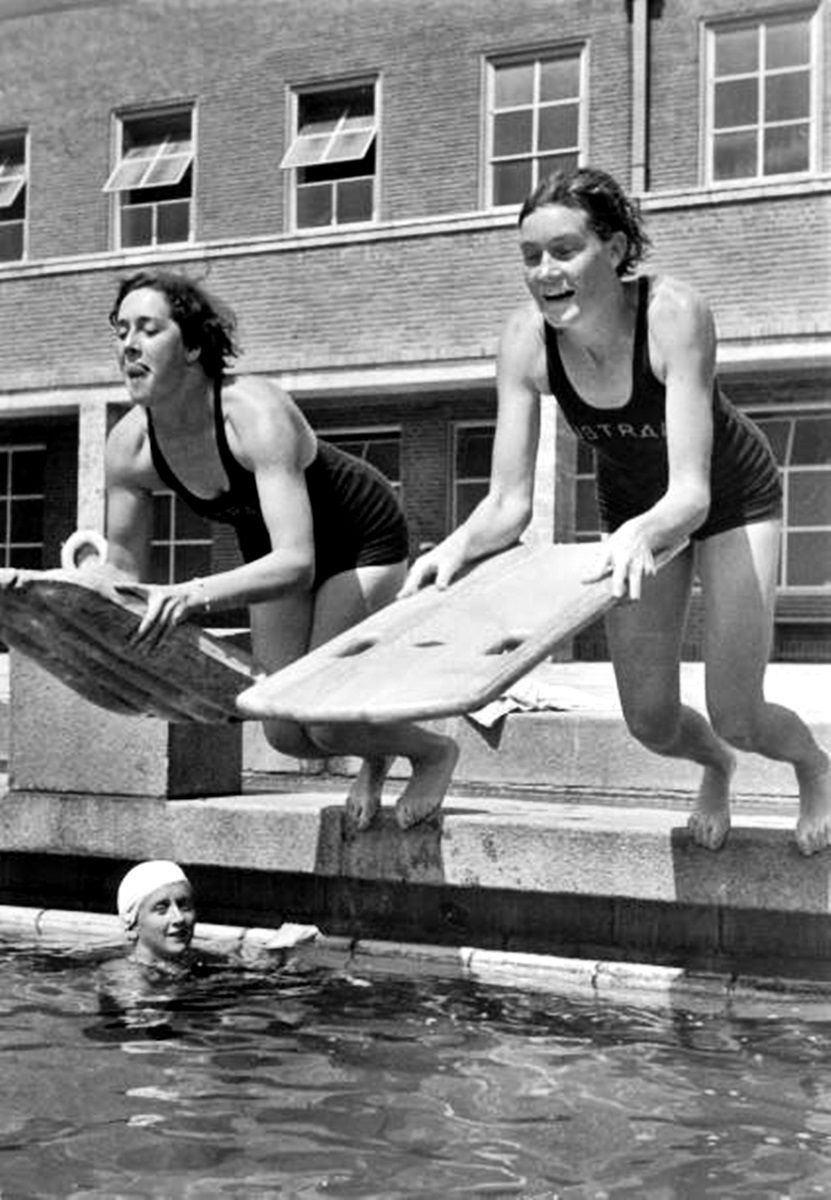 Ethel Ellen “Kitty” Mackay (later Hodgson, 5 June 1915 Melbourne – 25 June 1974 Sydney) was an Australian swimmer. She competed in the 100 m freestyle and 100 m backstroke events at the 1936 Summer Olympics, but did not reach the finals. Former Scone resident Bill Kendall was also in the team as men’s freestyle champion. NZ middle distance runner Jack Lovelock was the sole gold medalist in the ‘combined’ AUS/NZ team. He won the 1500m.

Not too many families can boast an Olympian in their ranks. In 1936 there were a whole lot fewer. Sarah ‘Fanny’ Durack had famously paved the way in the Stockholm Summer Olympics 1912 becoming the first Australian female swimmer to win a gold medal; in the 100 metres freestyle. Kitty had five elder siblings: Jack, Alice (‘Woodgie), Ken, Bob and Bill who are featured elsewhere on this blog site. It may be baby Kitty was the ‘star’ of a high achieving sextet?

Larry Writer is an award-winning author with an interest in sport, history and crime. His book ‘Dangerous Games’ is a brilliant expose of perhaps the most ‘infamous’ modern Olympics?

A team of 33 Australian athletes competed in the 1936 Olympic Games in Berlin. Poorly prepared and with limited support, they bravely faced formidable competition. Larry Writer recreates their experience so vividly we can imagine ourselves in the famous stadium surrounded by swastikas.

This is a tale of innocents abroad. Thirty-three athletes left Australia in May 1936 to compete in the Hitler Olympics in Berlin. Believing sporting competition was the best antidote to tyranny, they put their qualms on hold; anything to be part of the greatest show on earth.

Dangerous Games drops us into a front row seat at the 100,000-capacity Olympic stadium to witness some of the finest sporting performances of all time – most famously the African American runner Jesse Owens, who eclipsed the best athletes the Nazis could pit against him in every event he entered. The Australians, with their antiquated training regimes and amateur ethos, valiantly confronted the intensely focused athletes of Germany, the United States and Japan. Behind the scenes was cut-throat wheeling and dealing, defiance of Hitler, and warm friendships among athletes.

What they did and saw in Berlin that hot, rainy summer influenced all that came after until their dying days.

Kitty Mackay was part of the story being one of only four women competitors all of whom required a ‘chaperone’! The Australian team were the first to arrive and were treated to the ultimate propaganda welcome. It was red carpet all the way. Kitty Mackay was about 6ft tall. According to some records she was a very popular dance partner for the tall blond ‘immaculately’ uniformed German SS Officers! Kitty also formed a lifelong friendship with Argentinian swimmer and opponent Jeanette Campbell. See: https://en.wikipedia.org/wiki/Jeannette_Campbell

Australians at the Olympic Games

The Olympic team is now undergoing its test with the athletes of the world and for the next few days the cables will bring to us the news of their deeds in open competition. In her letters to her family, Miss Kitty Mackay has given many details of the lighter side of the trip apart from the training of the team.

Miss Kitty Mackay, the tall Bondi swimmer, who is one of the most popular sports women in the State; has enjoyed every minute of her trip, as her letters to her family imply. One of the most eventful features of the boat journey was her twenty-first birthday party she had just out of Bombay. Her family sent her a wireless message, and she said in her letter that it was a great thrill to get it but that it made her just a little homesick.

Her family were not the only ones to remember her on this auspicious occasion. Mrs. F. Buckle, the president of the Bondi club, and members of the club also sent her wireless messages, as well as several personal friends.

“On the morning of my birthday,” she writes, “the captain sent for me and wished me the best for the future, and drank my health with Mr. Alderson, the first officer, and the purser. It was so nice of him. In the evening the team gave me a marvellous surprise party, and one that I shall never forget. As a gift they presented me with a set of jade, and the women passengers afterwards gave me a lovely brown leather purse. It was so kind of all of them that I wondered if I deserved it”?

OF all the ports at which the boat called, Aden seems to have impressed the young Australian. “I shall always remember coining into Aden,” she says. “We arrived there at 3.30 am. I happened to be sleeping in a deck chair, as it was such a hot night. It was rather strange to see the other ships in port with their lights on and the dim outline of Aden in the distance. We anchored about a half-mile from the shore, but everyone was hustling around and we decided to go ashore.

“Once on shore, we found about a dozen decencars and drivers, who offered to take us around Aden for 6/-. We found the drive most interesting, and to me Aden was the most interesting place that I have ever visited, It is by no means a pretty place; ugly, in fact, but so important, as far as England is concerned. It is built on an extinct crater of a volcano, and the walls of the city are tall, craggy, mountainous, dark, dull, and grey in colour, with sharp peaks. On practically every peak a fortress is built. How they built these places puzzles me. It must have been a hazardous business. Around the sides of the mountains are steps leading to the forts”.

A Bowser near Native Huts

Among other impressions of Aden, Miss Mackay remembers the camel which put its head into the back of their car and sneezed, and a modern motor spirit bowser rearing itself amidst the native huts, with a sleepy Indian attendant. They went through the tunnels in the hills to the actual town of Aden, and saw the catchment area The huge concrete tanks were almost empty, as there has been no rain in Aden for more than four years. As soon as the shops were opened they were bustled into them by native shop-owners, who were anxious to sell their wares. “Fat Norton,” said Miss Mackay,” “bought an exotic pair of white silk pyjamas, absolutely covered with green dragons,” while the men got shirts for 1/6 each.”

Among the passengers who came aboard at Bombay was Jeffrey Farnol, “the well-known’ author. “We saw very little of him r at first,” said Miss Mackay, “but Gerald Backhouse, the Victorian athlete, began talking to him one night after dinner, and mentioned to him that I had one of his books with me, and that I would like him to autograph it. It was ‘Over the Hills’, and one night after dinner he signed it for me. He is not a good dancer, and, unfortunately, he only carne up to my shoulder, but he was very charming to all of us, and most interested in what we did. He is typical of his books and very refreshing’.

“Our day in Paris was a wonderful experience,” she continues. “We went to the Hotel Louvre, and I wish that I had a few million francs to stay for some time in this fascinating Paris. It is a beautiful city and we went to the Art Gallery where we saw the famous portrait of the Mona Lisa, as well as some other great works”.

[Photograph: The Australian swimming representative, MISS KITTY MACKAY, at the Reicht Sportsfield, Berlin. Miss Mackay is photographed with two of the German guides attached to the Australian team. They are showing the Australian various features of the great stadium, where the Eleventh Olympiad is in progress.]

Miss Mackay’s last letter is from the Reicht Sportsfield, Berlin.

Of the Reicht Sportsfield she says; “It is awfully nice out here * The playing fields and the gardens are all around us und on one side are the prettiest hills fully coveted with pine trees It is just like living in the country.”

One of the memorable features of their first days in Berlin was a visit to the Berlin Opera House to see a performance of ‘Madame Butterfly’. “Of course it was all done in German, and the orchestra, which, I understand is the third best in the world was marvellous The Opera House itself is very beautiful. A big chandelier hangs from the centre, admirably lighting the ceiling on which are many fine paintings. In a circle on the roof are various paintings of the composers which are vivid likeness to them all.”

“After the opera we went to supper with Count von Shrever and the President of the Olympic Committee. I found the German men most attractive and all of them danced well and they

were all tall, such a relief to anyone as long as I am The supper was served at a huge bier garten where there were a miniature lake, trees and flowers and two dancing floors and a wonderful orchestra.”

The swimming events of the Olympic Games do not begin until August 8. Miss Mackay has been drawn in a difficult heat, but from her past performances, she will obviously give of her best. Her many supporters will hope that she reaches her best form on the day she swims at the Games.

When the Mooltan reaches Sydney this morning it will bring with it the New South Wales members of the Australian Olympic Games team which competed in Berlin in August. The two young Sydney girls, Miss Kitty Mackay and Miss Pat Norton, spoke enthusiastically of their tour when interviewed in Melbourne on Monday.

Sunburned and looking very fit Miss Mackay said that she was more impressed with the physique of the overseas women swimmers than with their technique. “Their styles seemed far from perfect,” she said, “but their remarkable strength gave them a tremendous ‘kick’ and ‘pull’ ”.

“I think that Rie Mastenbroek was the outstanding swimmer of the Games,” Miss

Mackay said, “because she competed successfully in the 100 metres freestyle and back- stroke, in the 400 metres, and in the relay. She is very strong, and it would be an excellent idea to invite her to Australia. I think that she would consider such an invitation, and she would be very good for exhibition swimming, as she Is as strong as a lion, and would stand up to a lot of hard work.” Miss Mackay did not consider that there was any great difference in the training methods used overseas and to Australia.

“We watched the Japanese and the Brazilians at work”, she said, “but unfortunately were not able to see the Dutch swimmers, whom we were particularly anxious to watch, as they did not arrive in Berlin until three days before the Game» began.”

Both Miss Mackay and Mist Norton regarded the organisation of the Games as good, and they were most impressed with the opening and closing ceremonies and the effective pageantry There was a trace of political feeling at the opening ceremony through resentment in some quarters at the ruling that every team should give the Nazi salute to Herr Hitler, but actually this was not carried into effect, and many of the competitors marched by without saluting.

“I have one criticism to make,” Miss Norton said “and that is about the swimming events. We were all called out of the dressing-rooms a heat before we were required and this necessitated much waiting about. Also, the results were announced only by amplifiers in the stadiums, and were never put up on boards for the information of all.”