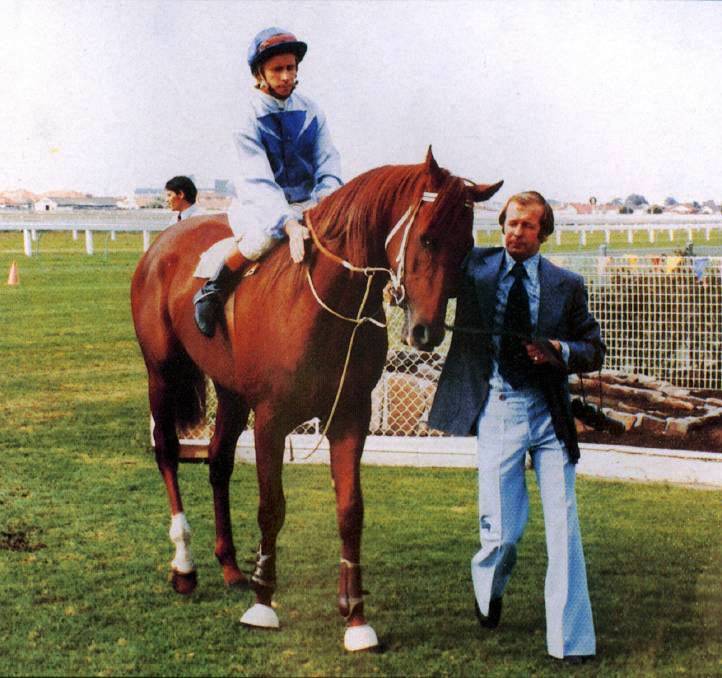 Luskin Star was bred by Jim O’Neill from Luskintyre, near Maitland. He was ‘got’ at Segenhoe by Kaoru Star in 1973 and foaled at Bhima in 1974 while his dam ‘Promising (NZ)’ was visiting ‘Biscay’. I recall he had some trouble after birth with retained meconium; but this was corrected in good time.

The colt by Kaoru Star out of Promising (NZ) was consigned to the 1976 Sydney Easter Yearling Sales as Lot 734, but was passed in for $6,500 with a reserve of $8,000. He was later purchased by Newcastle trainer Max Lees for stable clients Mr and Mrs John Balcomb, Don Ninnes and Barry Barnett. His sire Kaoru Star was a son of Star Kingdom and grandson of Hyperion. Promising, the dam of Luskin Star, was bred in New Zealand and imported to Australia by Jim O’Neill where she won two minor races at Newcastle and Wyong. Her sire Idomeneo is by the well-bred stallion Alycidon.

Luskin Star showed an effortless galloping style and great speed from his first training sessions at Newcastle’s Broadmeadow track. In his debut he won the 2nd division of the Breeders’ Plate over 1000 metres at Randwick, by 12 lengths, in the very good time of 58.8sec in soft ground. At his next appearance he won the 900 metre Silver Slipper Stakes at Rosehill, defeating Biscapol by 4 and 1/2 lengths, equalling the race record time of 52.6sec. He was then spelled until returned to training in February where he won a 900-metre barrier trial at Broadmeadow by 12 lengths. His return to racing was in the 1200 metre Northern Slipper Stakes at Newcastle. Heavy rain was falling prior to the race and trainer Max Lees requested permission from the stewards to scratch the horse. His request was refused. Luskin Star ran second to Mistress Anne by 3/4 of a length. In his next start, on a dry track at Rosehill on 12 March, he won the 1200 metre Todman Slipper Trial Stakes defeating Mondiso with Pacific Prince running third. In the Golden Slipper Stakes, Luskin Star shared favouritism with the TJ Smith trained Blazing Saddles. Coming from sixth on the home turn Luskin Star won by 7 lengths from Lloyd Boy and Blazing Saddles in race record time of 1min 10sec. His next start was in the 1400 metre AJC Sires’ Produce Stakes where he went to the front from the start, and led on the home turn by 5 lengths, before defeating Bold Zest by 3 lengths with a further 5 lengths to Bensynd in third. The winning time was a new course and Australian record of 1 min 21.5 sec. A week later he completed the Triple Crown for two-year-olds with an easy 6 length win of the 1600 metre Champagne Stakes by defeating Marceau and Bold Zest. While most two-year-olds would now have gone for a spell, Luskin Star was sent to the Brisbane Carnival in May. Here he won the QTC Sires Produce Stakes as a 10-1 on favourite and nine days later the Marlboro Stakes, surviving a protest by G. Cook, the rider of Gypsy Kingdom.

Keeper of the Australian Stud Book Jim McFadyen rated Luskin Star the best 2yo in the world in 1977.

Trained by Bart Cummings as a three year old Luskin Star won the Caulfield Guineas, ran 9th to Family Of Man in the Cox Plate and went on to win the Expressway Stakes from Always Welcome by one and a quarter lengths, won the Phar Lap Stakes and ran second to Lefroy in the in the Tulloch Stakes. Amazingly he then dropped back to 1100 metres to win the Galaxy by three lengths in his last run.

WHEN the Max Lees-trained Luskin Star rocketed to stardom in 1977 by winning the two-year-old Triple Crown, Kris Lees was too young to remember.

The memories and pride, though, will be strong in the Lees family and across the Hunter thoroughbred community when Luskin Star is inducted into the Australian Racing Hall of Fame on Friday night at Adelaide Convention Centre.

“Growing up, his triple crown photo had pride of place in our house,” Lees said. “He’s got a special place in our family.”

Lees said he was only six when Luskin Star blitzed his rivals in the 1977 Golden Slipper to win by seven lengths in a race record time.

“I can’t remember him as a two-year-old, but I’ve got very vague memories of his next season when he raced,” he said. “He won the Cameron Handicap at Newcastle, I can just remember that day.

“I got a phone call a few months ago from [Australian Racing Hall of Fame chairman] Bob Charley to say he was being inducted, so it’s very pleasing.

“A lot of old people from that era around the traps and even press blokes have still got very fond memories of him. It was only the other day – everyone’s got their own opinion – but some were saying he’s the best Slipper winner ever.”

Luskin Star was bred by Jim and Marea O’Neill at their Luskintyre property. The Kaoru Star-Promising colt was passed in for $6500 with a reserve of $8000 at the 1976 Sydney Easter Yearling Sales and was later bought by Max Lees for Mr and Mrs John Balcomb, Don Ninnes and Barry Barnett. The O’Neills also retained a share. The legendary Bart Cummings trained Luskin Star for his last five starts and said he was the greatest two-year-old he had seen.

After his Golden Slipper (1200m) win, Luskin Star set an Australian record time in a three-length AJC Sires’ Produce Stakes (1400m) win before completing the triple crown with a six-length victory in the Champagne Stakes (1600m).

As a three-year-old, Luskin Star won the Caulfield Guineas, the Expressway and Phar Lap Stakes and The Galaxy to finish with 13 wins and three seconds in 17 starts and $280,900 in stakes. In the spring of 1977, the largest crowd of the modern era at Broadmeadow watched Luskin Star win the Cameron Handicap.

The chestnut colt was retired to Newhaven Park Stud at Boorowa, NSW. He died in 2002.