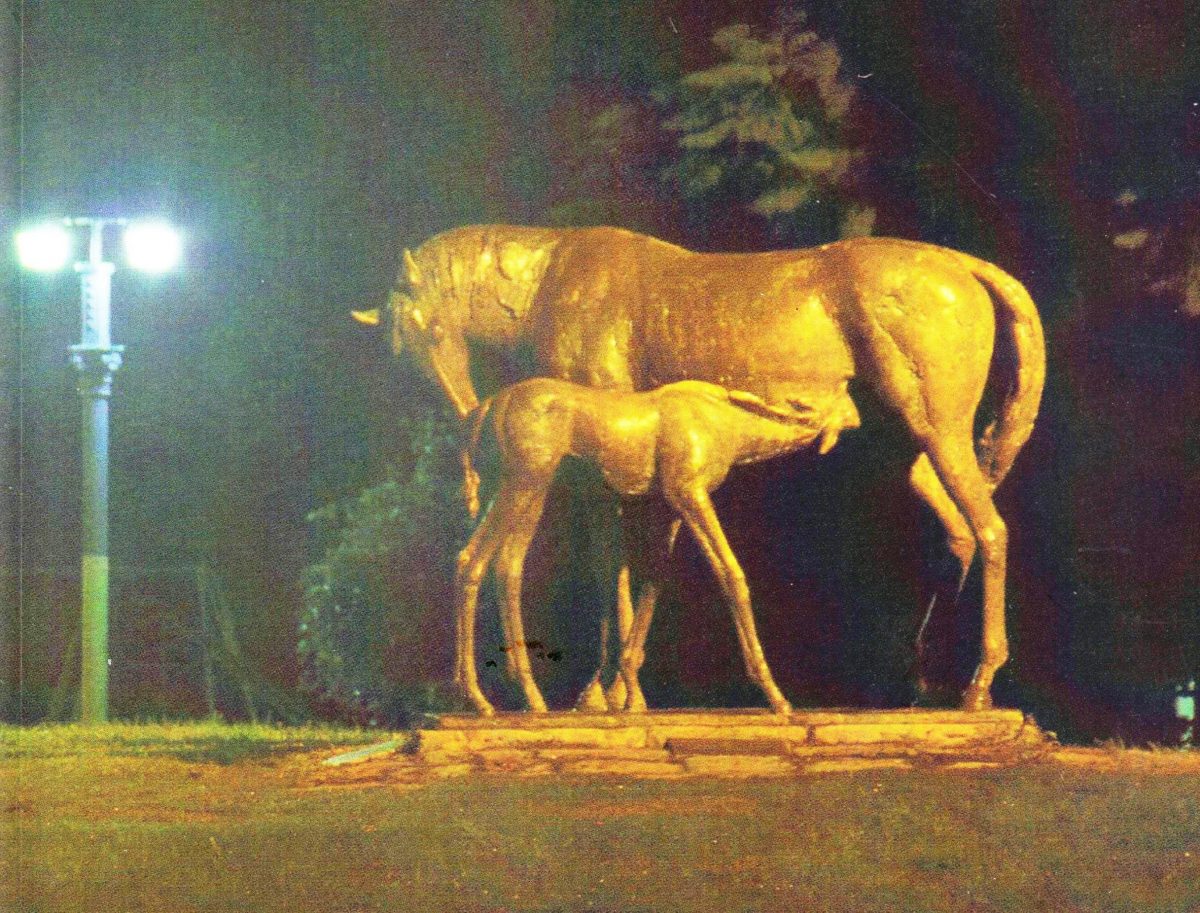 There is little doubt the Mare & Foal Statue is firmly established for posterity as the seminal emblematic totem for Scone and the Upper Hunter.

“This sculpture identifies Scone and the Upper Hunter Valley as the Horse Breeding Centre of Australia. It commemorates the role horses have played in the development of Australia and is a tribute to one of mankind’s greatest friends”.

I include here the history of its acquisition; which was not entirely a smooth path! Are they ever? There are still some ‘hidden secrets’ and always will be.

I wrote the following when on the Upper Hunter Shire Council. I’m glad I did.

Messages from the Mare and Foal

Nick Dyrenfurth (Sydney University) and Frank Bogiorno (Kings College, London University) writing recently in ‘The Australian’ (27/11/10) ‘Neglect of History Jeopardises Our Future’ state: ‘contempt for politicians past and present may help explain our national ignorance’ and ‘politicians are seen as removed from everyday experience’. Ouch! That hurts a bit!

Have you ever contemplated the message as depicted on our most identifiable tourist totem and emblematic icon? Have you ever even read it? I must confess I had to seek it out myself? It reads as follows:

“This sculpture identifies Scone and the Upper Hunter Valley as the Horse Breeding Centre of Australia. It commemorates the role horses have played in the development of Australia and is a tribute to one of mankind’s greatest friends”.

Profound poetical stuff – but have we taken much notice or paid much attention? Well done David Archibald and his able acolytes as well as fellow guarantors: Herbie Phelps, Barry Chapman, Jim Rodger, Jeremy Francis, Charles Duke and Alan Atwill! I don’t know much about art but I study animals (and people) a lot. It’s exactly as sculptor Gabriel Sterk always intended. Erstwhile Newmarket (UK) resident Jim Rodger stated at the time: ‘He wished Newmarket had something like it’? The ‘Mare and Foal’ admirably captures the ethology (behaviour), spirit and emotion of the moment. It’s almost 30 years since we unveiled our community ‘user friendly’ statue on 3rd.  March 1982. Officiating Minister Eric Bedford MLA and local Scone Shire Councillor Ken Cosgrove were brothers-in-law well remembered by war hero Alan Brideoake as ‘predatory young guns’ from the West Wyalong region. Doug Scott (Harper’s Cottage Gallery) was chairman of the then Scone Shire Council Tourist Committee responsible for its commission, accession and some fund raising? Col Cooper was an enthusiastic auxiliary. Col recalls muted even desultory community support but vividly recounts the return horse float trip to Adelaide to transport the 1.4 tonne statue – no mean feat by Dave Archibald and Cr. Herbie Phelps – a genuine horseman and a mechanical minder! It was important to secure the sculpture – and pay for it – before the sculptor decided to sell it elsewhere! The float provided by David Macintyre insisted on an involuntary sojourn in Broken Hill on the return journey!

The committee were given four models to choose from and wisely opted for the current prototype. One alternative was a depiction of equine concupiscence which was deemed inappropriate!  Athene Lambley reminded me that the statue was ‘accommodated’ on the lawn at Alan Atwill’s ‘Redbank Stud’ until it was time for its permanent placement in Elizabeth Park.  Athol Preston and his Commonwealth Bank extended abundant fiscal sustenance when most needed. The guarantors might have suffered more than a few anxious moments? Coleen Pinkerton provided secretarial support – her initial foray into LG and perhaps her most challenging role! Chris ‘Vogue’ Sellis, Bill French, Andrew Bowcock, Cr David Macintyre and the then proprietor of the Airlie House Motel were other avid proponents: the latter fervently believing its capacity to enhance tourism, promote regional pride and encourage ‘trade’? Tim Abrahams was the landscape specialist retained to provide the ‘architecture’ for statue enhancement. Regrettably the small scale model provided as the prize for a fund raising raffle was surreptitiously ‘borrowed’ and never returned! More weight on the Commonwealth Bank! The replacement trophy secured poste haste from WA was won by committee man Alan Atwill!

John Maxwell (Priefert) stated recently ‘the foal is the most ridden horse in the country and the duo the most photographed’. He’s probably right? Our visitors love it/them! Belinda McKenzie at the Scone VIC will affirm. You will agree recent improvements to Elizabeth Park are favourable – the result of community and Council planning and preparedness? For most transitory visitors Elizabeth Park is our virtual shop window. I’ve seen the statue of ‘Hyperion’ outside the Jockey Club in High Street Newmarket UK and the magnificent ‘Man O’ War’ in the Horse Park in Lexington KY USA. Guess what? You can’t touch either! When we talk of ‘twinning’ these are the areas we compare ourselves with? We really do have a lot to celebrate, share – and promote! The underpinning philosophy captured in the citation is the driver. Sometimes it’s good to be reminded of what we have? Neglect of history jeopardises our future? Adumbrations of the Upper Hunter Equine Infrastructure Working Party sound alright to me? Further enrichment, enhancement and embellishment is coming!