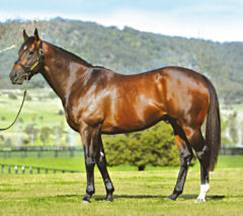 Inheriting the crown from his sire Danehill, Redoute’s Choice is the king of Australian Sires and has immortalised his legacy through the deeds of his sire sons.

Firmly established among the world’s elite stallions, Redoute’s Choice continues to build his own remarkable record on the track and in the ring while his dynasty of sire sons (three in Australia’s top 10 in 2017, including Champion Sire Snitzel) and broodmare daughters extend his influence to a new generation.

His Group 1 winners are headed by Australian Horse of the Year Lankan Rupee, whose five Group 1 victories earned him World Champion Sprinter & Australian Horse of the Year honours in 2014; and his best daughter, the Golden Slipper & VRC Oaks-winning Miss Finland, now the dam of Arrowfield filly Stay With Me, winner of the 2015 MRC Thousand Guineas G1.

As only a superlative stallion can do, Redoute’s Choice keeps adding jewels to his crown, with a rare Group 1 double by full brothers Mustaaqeem & Rafeef taking his tally of Group 1 winners to thirty-two on 6 May 2017. That’s more than any other active sire in Australia, and behind only Galileo among the world’s current stallions.

High-level racetrack performance and the soaring success of his sire sons Snitzel & Not A Single Doubt fuel the strong demand for Redoute’s Choice’s yearlings. In 2017 he averaged almost $500,000 at Inglis Easter (Session 1), headed the Magic Millions sire averages and supplied four million-dollar yearlings, including the season’s top-priced lot, the $2.5 million full brother to star juvenile Pariah.

And still, the best may be yet to come. A new chapter opened in the career of Redoute’s Choice when he served two superb books of mares at HH The Aga Khan’s Haras de Bonneval in 2013 and 2014. Add the early success of his younger sire sons Elzaam (in Ireland) & Burgundy (in New Zealand), and the promise of Arrowfield’s young guns Panzer Division & Scissor Kick (who shuttled to Haras d’Etreham in 2017), and the global prospects for the Redoute’s Choice dynasty are looking bright indeed.