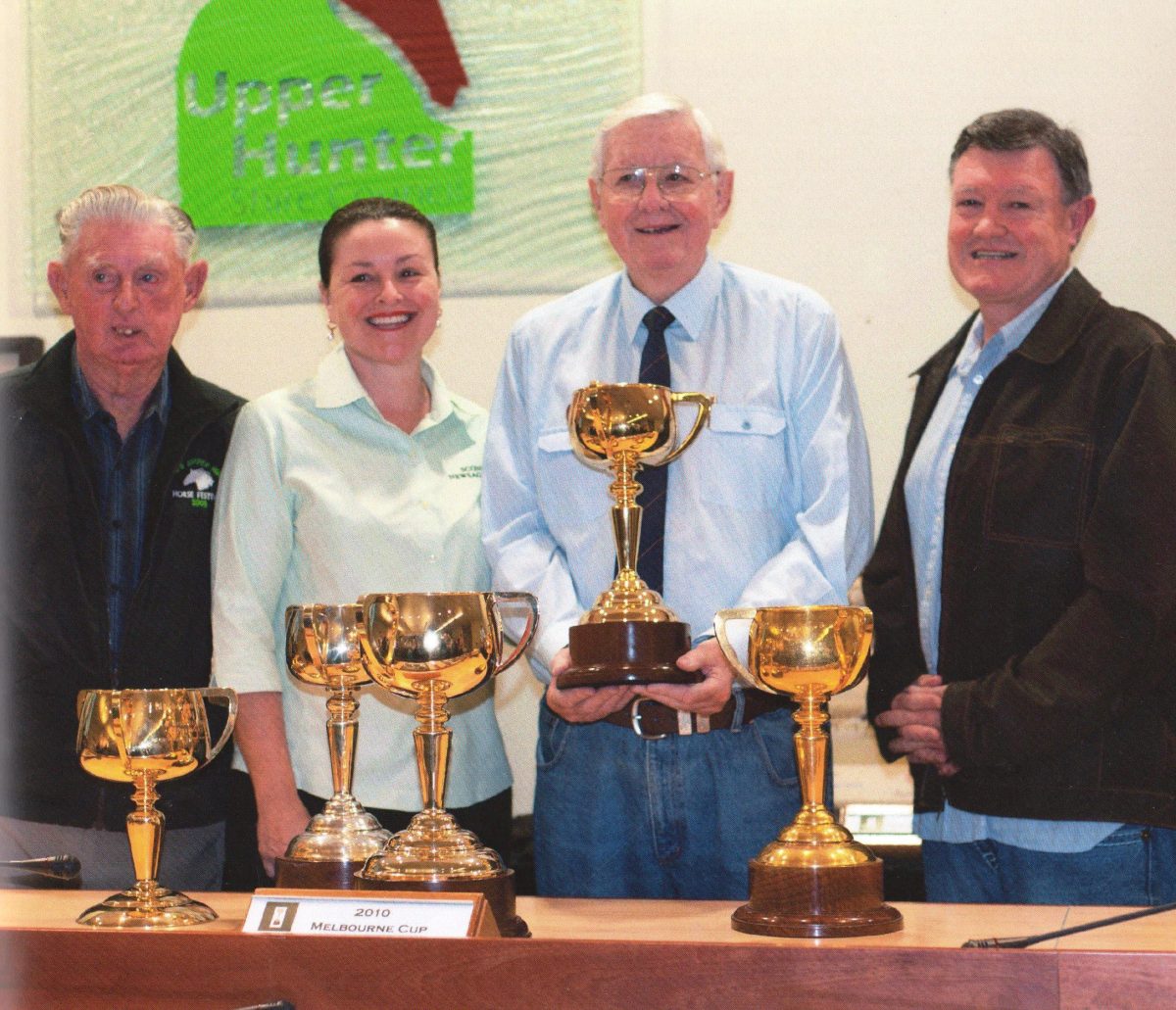 The featured image shows Russ proudly holding his beloved Kensei Cup (1987) flanked by daughter Yvonne and son Mike. Harley Walden is on the far left. Harley was also a tower of strength on the organising committee. The other cups are Poitrel (1920), Rimfire (1948), VRC 2010 Melbourne Cup (Americain) and Evening Peel (1956).

Russ Lazarus was a great contributor. He cherished the final thirty years of his life in Scone where he always longed to be. I treasure many memories of Russ not least his Sutton Farm Award Christmas Parties every year. I was the fortunate recipient of an award myself. I think it was for ‘masterly inactivity and/or vigorous inaction’; possibly a combination of both? Apparently I recommended that Russ should NOT spend a lot of money on the treatment of a particular chronic aliment in one of his horses? This was soon after he first came to Scone. I explained ‘tincture of time’ was the best and cheapest cure. He never forgot what I had said although I have little or no recollection. He had also seen Sarah and I cleaning the steps of the Civic Theatre early one Sunday morning. We took affirmative action. They hadn’t been touched for over five years. Russ liked that sort of volunteer proactivity.

It was when we agreed to host the VRC Melbourne Cup promotional tour in 2010 that Russ really sprang into action. It was a first love. I was the facilitator as a Councillor of the host Upper Hunter Shire Council. Russ was the custodian of 1987 Melbourne Cup winner Kensei which he owned in partnership. This started a ‘cascade of cups’. We ended up with five on the day (15/10/2010). Russ was my right hand man. We cajoled, coerced and paroled as one. Russ and his family were exhilarated with the response.

The following funeral notice for Russ Lazarus appeared in the Sydney Morning Herald on November 28th 2015.

LAZARUS Russell Joseph of Scone & formerly of Oatley, passed away peacefully at home in Scone on Tuesday 24.11.2015, Aged 83 Years; Beloved husband of Dorothy (deceased) beloved father of Michael, Paul and Yvonne, Father In-law to Anne and Matthew; Grandfather to James and Jonathon and partners Guissel and Naomi; Beloved brother to Ron and Kevin (deceased) and niece Debbie.

A Funeral Service for Russell will be held on TUESDAY (December 1st 2015) at 1pm in St Luke’s Anglican Church Scone, followed by Private Cremation.

Russ had played a great innings and contributed so much to Scone and the thoroughbred industry he loved. I adduce the following tributes from Caitlin Andrews and Brain Russell. They are much more adept at accolades than I am. Thank you both. They each paint a beautiful word picture truly reflective of the man.

Every day you hear of people succeeding, but it is the quiet achievers who are most interesting and epitomize what it is to be a real hard working Aussie.

One such man is Russ Lazarus – a man who has accomplished a lot and through his aspiring business intellect, morals, values and core beliefs can look back today and be proud.

But it’s never about Russ – he doesn’t like to fuss, he believes his fruitful life and experiences are thanks to his dear mother Sutton Blanche Lazarus and lovely wife Dorothy.

These days Russ is happy to cruise around his property – Sutton Farm – and enjoy the landscape he sees when he looks out the window of his homestead, but behind the scenes he is really doing a lot more.

Although the humble man wouldn’t share much about his good deeds for Scone and the Upper Hunter, he would share some memories from his 80 odd years.

As a boy Russ grew up in Kensington – then the horse country of Sydney – and attended Mowbray House at Chatswood prior to boarding at The Kings School.

An only child, Russ and his mum lost his dad when he was just three-years-old and therefore were always very close.

In later years, Russ named his place, homestead and all his race horses after his mum because she did so much for him and he wanted her to be a part of his life forever.

“My mum was such a wise person and a very good business person,” Russ said.

“As I grew older and older I realised she was such a great person, which I was I named everything after her.”

At 16-years-old Russ and his mum decided he should try his hand at country life and he moved to Uralla for 18 months to work as a jackaroo.

Despite enjoying the experience and learning self-reliance, Russ decided sheep weren’t for him and made his way back to Sydney, which is when he passed through Scone and a seed was planted.

“I remember when I came back through Scone thinking what a beautiful place and I had been told about the horse industry, so I just tucked that away into the back of my mind,” Russ said.

During the next chapter of his life Russ enjoyed the life of surfing the Bondi waves, eastern suburbs parties and playing rugby union for Easts Rugby Union Club.

When he met his wife to be Dorothy and with her advice and blessing, he joined the Woolworths Training Scheme – just one of many good decisions Dorothy helped him with in their 62 years of marriage.

Some of the others he said were to give away rugby union and to give up smoking and drinking.

“I owe Dorothy a lot, just like my mother, they both have (d) loads and loads of common sense,” Russ said.

“My mother always said common sense was the best university degree you could get.”

Dedication and skills saw Russ work his way up the corporate ladder within Woolworths from a manager to junior supervisor right up to manager of the Wynyard store, which was the second largest in the country with about 200 staff.

When he was 35, Russ decided it was time for change and teamed up with restaurateur Johnny Walker, becoming business partners in many bistros in Sydney.

After 10 years, Russ sold out to the Walker family and bought into the Kurrajong Health Farm at the Blue Mountains.

Russ said he felt drawn to the country and at the time the farm was a place where some of the most notable Australians visited as guests such as leading jockeys, cricketers and prime minister’s wives.

Russ’ first affiliation with the race horse industry began when learnt of stallion shares that had come up for offer at Kia Ora stud and made the journey to Scone to meet John Clift – the start of a valued lifelong friendship.

“This is when I really started to get the feeling for racing and breeding,” Russ said.

“I received tremendous help from John and his son Jonathon, especially in my early days when I purchased a few broodmares and ran them at Kia Ora.”

Russ has enjoyed some of the greatest moments in thoroughbred racing, but one of the most noted would have to be when Kensei won the Melbourne Cup.

Describing it as a miracle, Russ joined with friends in the worthwhile purchase of the horse as a yearling and smiles as he says Kensei went through the classes and won the cup.

Since, Russ has had hundreds of winners in the district with the Sutton name and also co-owns Beautiful Crown with Andrew and Lasca Bowcock.

He is proud to be able to hand on the empire he has built to his son Michael.

Russ and Dorothy have three children and two grandsons – Michael, Yvonne who lives in Scone and Russ says has been a great help throughout the years, and Paul – a mechanical wizard based in Sydney.

Not surprisingly Russ has been recognised throughout the years.

After 12 years as the treasurer of the NSW Bloodhorse Breeders Association he brought the association out of the red and into the blue.

Russ was made a life member of the association and in about 1996 he was awarded the President’s Award of the Hunter Valley Breeders Association.

However now he wants to give back, enjoy visiting historical events in the area and value those who are most important.

“Every decade has its compensations and now I’m in a decade of caring and sharing,” Russ said.

“My main aim throughout the past few years has been to assist people with stallion nominations and cheap adjistment rates to enable those that don’t have the complete means to be in the racing game,” he said.

“I also help about eight charities in the local community, with the main one being the Friends of Strathearn to purchase aids to care for people and make them more comfortable in their present situation.”

For the past two years Russ has held a function to thank all the carers in the community, providing donations and awarding the Sutton Farm Foundation Awards for outstanding service to the community.

“I love Scone, I love the view from my home, I love being with my wife and I love all the sporting events on the television.

“We are blessed to have lovely carers; they help me look after Dorothy as long as I can in our home.”

Back in the early 1980s Sydney owner Russ Lazarus cracked the racing lottery when he bought a share in a potential stayer by Blarney Kiss for a small outlay.

Named Kensei and prepared by Randwick trainer Les Bridge, the gelding went on to win nine races for Lazarus and his five partners capped by his victory in the 1987 Melbourne Cup.

Kensei was also successful in the Tattersalls Cup at Eagle Farm and Grafton Cup, runner up in the AJC Metropolitan and Newcastle Cup and third in the AJC Summer Cup, Tattersall’s Club Cup, Chelmsford Stakes and George Ryder Stakes.

The success of Kensei sparked tremendous enthusiasm in Russ Lazarus for breeding and racing which has led to a quarter of a century of enjoyment and brought benefits to the community as well as to his family.

He has served on the NSW Breeders committee, established a family-owned stud Sutton Farm at Scone and races many homebred horses with their names carrying the prefix Sutton.

Sutton Farm became the retirement home for Kensei until his death.

The Lazarus input into local racing was demonstrated last week by the maiden win at Muswellbrook of Sutton Chilli, a 3YO filly prepared on the track by Mack Griffith, followed by the win of the Luke Griffith trained gelding Sutton Brave at the Scone meeting.

Luke is Mack’s brother and between them they have won many races for Lazarus in recent years with the likes of Sutton Princess (eight wins; Wellington Boot), stakeswinner Sutton Review, Brisbane winner Sutton Friend and Sutton Miss (six wins).

Lazarus is a managing shareholder in both sires, both standing at Erin Park Stud at Tamworth.

He is also in the syndicate that imported the good sire Beautiful Crown, now standing at Patinack Farm at Sandy Hollow in the Hunter Valley.

Sutton Brave’s win at Scone on Saturday was followed an evening function at the Scone racecourse put on by Lazarus, now close to 80, and his family to thank friends for their support in the 30 years since they moved to Scone.

The night also raised $22,000 for equipment for Strathearn Village, a resident age care centre at Scone.

Another highlight was a presentation by Russ Lazarus to his long-time friend John Clift of a framed photograph of Gunsynd.

Now 87 and retired this year as president of the Tamworth Jockey Club, John Clift bred the great grey Gunsynd on his The Dip Stud on the Liverpool Plains north of the Hunter Valley.

Clift later moved to Kia Ora Stud at Scone where Gunsynd stood during a brief stud career. In his twilight years Russ developed a very close affinity with Jim Bowcock; formerly of Alabama Stud. They had much in common.