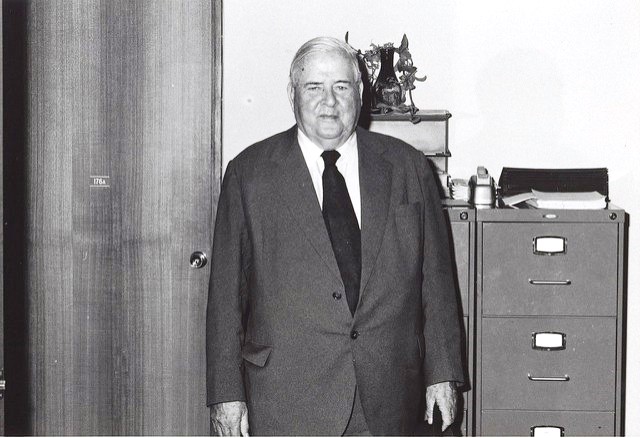 Enlisting in the Australian Imperial Force at Paddington, Sydney, on 9 July 1940, McMullin served briefly as a gunner in the 3rd Field Artillery Training Battery. He was discharged in January 1941 on being commissioned as a pilot officer in the Administrative and Special Duties Branch of the Royal Australian Air Force. Appointed to No.24 Squadron, he served at Townsville and Maryborough, Queensland, and was promoted to flying officer in July 1941 and to flight lieutenant in October 1942. In 1944 he briefly commanded No.42 Squadron and was appointed adjutant. He was demobilised on 22 February 1946. On 23 November that year at St Stephen’s Presbyterian Church, Sydney, he married Thelma Louise Smith, daughter of W. J. Smith. He and his wife moved in 1956 to his father-in-law’s St Aubins stud, Scone, where he bred cattle and developed a keen interest in racehorse breeding.

At the double dissolution election in 1951 McMullin was elected as a Liberal Party of Australia senator for New South Wales. Serving as president of the Senate from 1953 until 1971, he became chairman in 1956 of the Senate standing orders and the parliamentary library committees, and a member of the house committee and of the joint committee on the broadcasting of parliamentary proceedings. A strong believer in the role of the Senate and the bicameral system, he prepared with (Sir) John McLeay An Introduction to the Australian Federal Parliament (1959). During parliamentary recesses he toured extensively in country areas, developed an affinity for school children and their parents, and spoke on radio and television on the role of parliament. He was appointed KCMG in June 1957.

McMullin’s term as president was marked by his strong interest in the planning of a new and permanent Parliament House in Canberra. He was chairman (1965-71) of the joint select committee which developed a number of concepts. His preference was for a building on the shores of Lake Burley Griffin, but when the government finally made the decision to build on Capital Hill, he was quite satisfied with the outcome.

Australian representative (1954-60) on the Commonwealth Parliamentary Association, McMullin served as chairman (1959-60 and 1969-70) of the general council. He saw the CPA as the living embodiment of all that is best in the Westminster system and as the protector of democratic rights in all nations within the Commonwealth. His diplomatic skills were tested while chairing the CPA conference held in Canberra in 1970, when the Commonwealth was concerned about South Africa’s apartheid policies. Tanzanian delegates took affront when overnight their flag outside Parliament House fell to the ground; they accused Australia of failing to maintain the necessary security and their leader stated that, in his country, ‘we would guard the flags with machine guns’. Sir Alister travelled extensively in the service of the CPA; he represented Australia at the funeral of President J. F. Kennedy in Washington in 1963 and led the Australian delegation to the opening (1964) of the Territory of Papua and New Guinea’s first House of Assembly.

McMullin worked closely with the parliamentary and national librarian, (Sir) Harold White. Together they developed the Commonwealth’s first Legislative Research Service to assist parliamentarians in preparing for debates. Appointed a member (1960) of the interim council of the National Library of Australia, McMullin was deputy-chairman (1961-71) and chairman (1971-73) of its council.

Elected the first chancellor (1966-77) of the University of Newcastle, McMullin was awarded an honorary D.Litt. in 1966; the university named the McMullin Building after him. He was a director of Muswellbrook Industries Ltd (1966-74) and of Forestwood Australia Ltd (1970-78). He did not contest the 1970 Senate elections and retired from the chamber the next year. Of large stature, dignified and courteous, McMullin strove as president of the Senate to give all members a ‘fair go’. The Australian Democratic Labor Party senator, Condon Byrne, praised him for his ‘liberality and understanding’, and for his impartiality and integrity. Sir Alister himself described his parliamentary career as ‘good fun’. Survived by his wife and their daughter, he died on 7 August 1984 at Scone and was buried in the Uniting Church cemetery, Rouchel; their son had died in infancy. A portrait by (Sir) Ivor Hele hangs in Parliament House, Canberra.