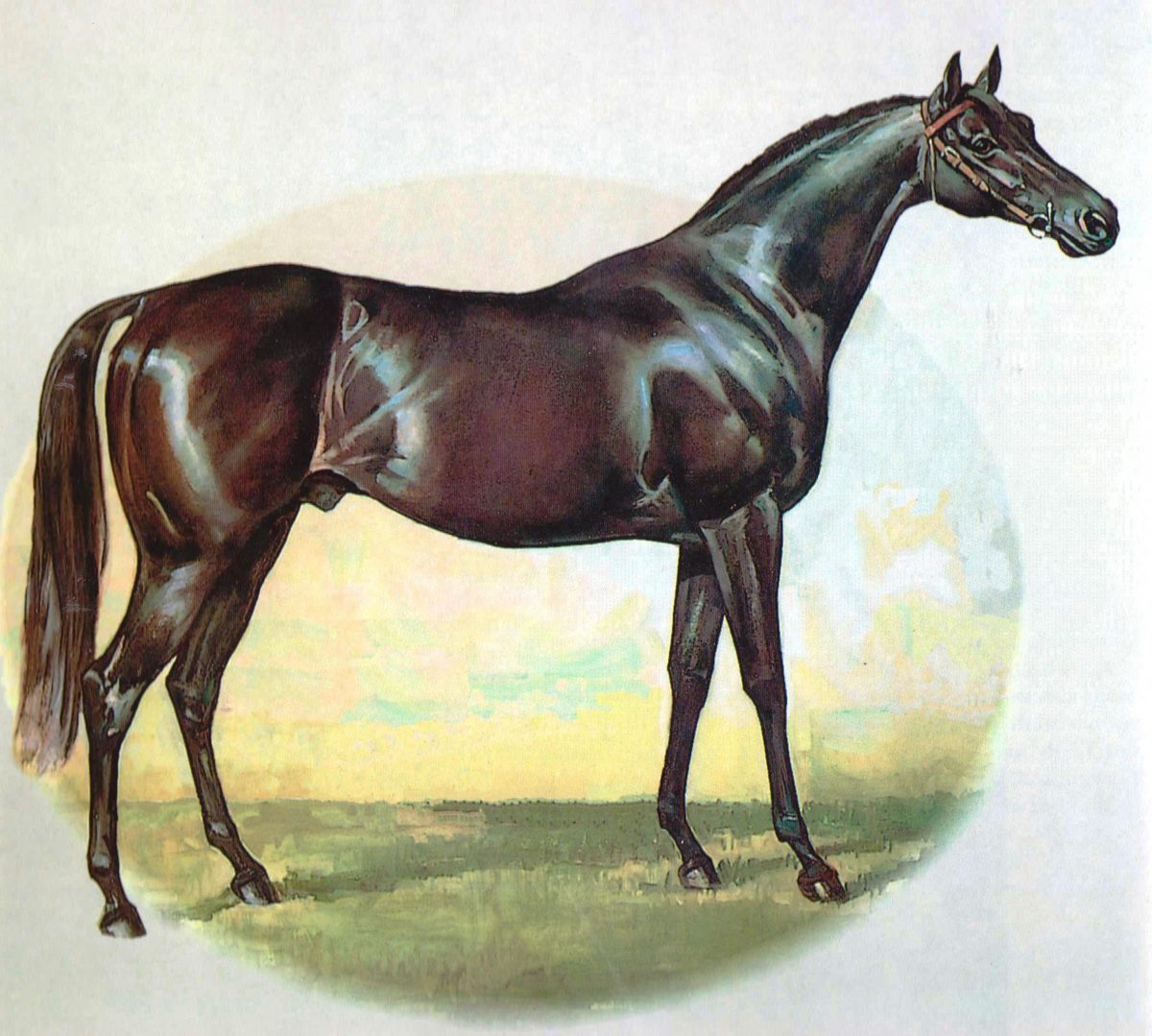 The Barb was an Australian bred Thoroughbred racehorse, famed for winning the 1866 Melbourne Cup, the Sydney Cup twice, and other quality races. He was bred by George Lee and foaled in 1863 at Leeholme, near Bathurst, New South Wales.

The Barb inducted into the Australian Horse Racing Hall of Fame in 2004.

Thousands of Thoroughbreds have competed in Australia, but fewer than 50 have been successful enough to merit induction into the Australian Horse Racing Hall of Fame.

Some of these are fresh in the minds of punters, having achieved Hall of Fame worthy results in recent times. Others, however, date to earlier times.

Their exploits were equally remarkable and to prove this we need look no further than a black stallion known as The Barb.

It’s not certain if his name was meant to invoke the spirit of the Arab-Berber cavalry horses of that name which were so effective during the eighth century and were reputed to relish fighting, but The Barb seemed to possess enough of that nature to earn him the nickname, ” Black Demon.

Adam Lindsay Gordon saw him as a horse who ‘surges and flashes’ past the field. Bells Life in Sydney wrote of the AJC ‘Australian Derby’ in 1866:

‘He appears delighted when going a strong pace, and in a race he fairly revels in going a cracker from end to end. It was a sight worth looking at on the Derby Day to see him make the running from start to finish; his jockey sitting quietly, hand down, and the other running after him, not with him. The Barb to be appreciated must be seen in action. When standing quietly in his box, he might be passed by as not a very attractive looking horse; but set him going, and the way he gets over his ground, with his beautiful action, so true and level, once seen is not easily forgotten.’

He was often described as high strung and temperamental.

Some attribute these characteristics to the fact that he was stolen and perhaps miss-treated by bush rangers while he was a foal at foot from Leeholme, NSW.

Whatever the reason, he did live up to his reputation through throwing his rider and bolting the first time he was tried.

Fortunately, his owner and trainer, John Tait, found a way to channel The Barb’s exuberance productively.

So much so, in fact, that The Barb finished his 23 start career with 16 wins. (Records of that era contain some discrepancies regarding the exact number of starts and wins. One source lists 16 wins from 21 starts, another 15 wins from 23 starts. The third place finish in his first official race and a second in the All Aged Stakes leave between three and six races unaccounted for, possibly DNPs).

By way of background, The Barb was foaled near Leeholme, NSW, in 1863. Bred by George Lee, his sire was Sir Hercules, who sired 18 stakes winners, and his Dam was Fair Ellen. Both were of predominantly British bloodlines, with the exception of one near predecessor of Sir Hercules, also of that name, who hailed from the Emerald Isle.

After being recovered from his abductors, The Barb was sold for 200 guineas to honest John Tait, a man who is sometimes credited with being the first to make horse racing a commercial venture.

The business was apparently to hi liking, because he fielded four Melbourne Cup winners as an owner, a record that has been tied but never surpassed, and one could reasonably conclude that Tait’s 100-1 long-shot, The Pearl, who won the Cup in 1871, brought a broad smile to Tait’s face.

As a two year old, The Barb probably gave Tait pause to wonder if his 200 guineas had been squandered. There was the afore-mentioned bolting incident and a third place finish, but to The Barb’s credit, 1865 did produce a win in The Nursery Stakes.

A spell seemed to induce some measure of calmness in The Barb. When he returned as a three year old he was the class of the field. He won the AJC Derby first up, started and won as the favourite in the Melbourne Cup with W. Davis aboard. His erratic nature then resurfaced briefly, perhaps costing him a victory in the All Aged Stakes. He came back to post and easy victory in the Australasian Champion Stakes.

The Barb continued to perform respectably in 1867, notching Group 1 wins in the Launceston Town Plate, the Port Phillip Stakes and the Sydney Cup.

It was as a five year old, however, that he reached his zenith, winning all seven of his starts, which included a second Sydney Cup, Craven Plate,  VRC Royal Parks Stakes, AJC Metropolitan Handicap and Queens Plate.

All this success resulted in The Barb being assigned a 73 KG weight for the Melbourne Cup.

Accustomed as he was to carrying great weight, Tait, not willing to risk losing lucrative stud fees, retired the horse, selling him to Charles Reynolds. Standing at Tocal Stud in the Hunter Valley, he failed to get any really good runners, certainly nothing approaching his record, but that case is not entirely unusual. Some of his daughters did become noteworthy broodmares.

The Barb died in 1888 at Mitta Mitta, at the considerable age of 25, perhaps some measure of compensation for his early hardship.

One criterion all horses who aspire to the Hall of Fame must meet is having run against top level competition. This was represented for The Barb by 1867 Melbourne Cup winner Tim Whiffler and Fishhook.

Strong competition and an impeccable record, despite being hard to precisely ascertain, resulted in The Barb earning a place in the Australian Racing Hall of Fame in 2004.