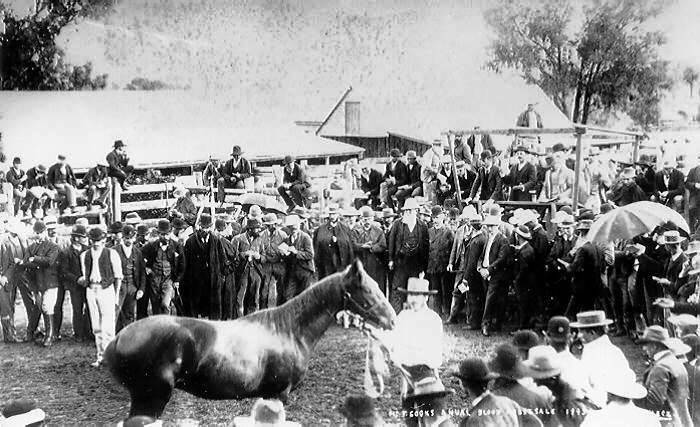 Over 100 years ago the ‘big man’ in horse production in the Upper Hunter Valley near Scone was Thomas ‘Tom’ Cook. The featured image shows an early production sale at ‘Turanville’ which is mid-way between Scone and Aberdeen. There were reputedly 1000 horses offered at some of these sales. This is huge by any standards. Tom Cook was also a great local benefactor and made many donations to the community including the Thomas Cook Fountain to commemorate Federation in 1901. This used to grace the centre of the Kelly Street/ Liverpool Street intersection but is now sequestered in the small park near the Gundy Road turnoff.

Mr. Thomas Cook of Turanville, Scone died on Saturday, aged 77. The deceased had been in delicate health for several years. He was born near Hamilton, Canada. His parents went from St. Neots, Cornwal, to Canada, and in 1837 returned to England. Then they came to Australia, arriving in Sydney after a six months’ voyage in November, 1837, and went to Turanville, then owned by the late Mr. William Dangar. In 1842 Mr Cook’s father went into the interior, and formed stations at Myall Creek, Paradise Creek, Bulleroi, Bunnabunna and Burren Burren. The aborigines were troublesome in those days; Mr. Cook and his parents having many narrow escapes. His father subsequently took up Nemingha station, near Tamworth. In 1854 the deceased went to Turanville, and at 21 took charge of the station residing there over since. He married a daughter of the late Captain Sibley. She died in 1903 without issue. Deceased was a leading pastoralist of the north and north-west, and made horse breeding a hobby, rearing many noted animals at Turanville. Deceased was of a most philanthropic disposition, a leading supporter of charities and public movements, giving to all most generous financial support. In fact, during the whole of his life he was Scone’s greatest benefactor. He gave £2000 to the Church of England in Scone, and lately offered a fine site, worth about £1000, to Scone as a memorial for the Scone Hospital. A larger and more suitable site was subsequently offered by Mr. William Bakewell and accepted. Deceased also presented a memorial fountain to commemorate Federation, and many other gifts. He was president between 30 and 40 years of Scone Hospital, school of arts, race club, cricket club, and other public bodies. Till the last, although in feeble health, he took great interest in public affairs. All amusements were abandoned in Scone on Saturday as a token of respect.

Turanville, during Mr. Cook’s occupancy, was one of the most noted horse breeding establishments in the northern district, and numbers of good racehorses first saw the light on its rich pastures, while army remounts, utility horses, ponies, etc. were bred in large numbers. The annual sale of the Turanville-bred horses attracted purchasers from all parts of Australasia and India. A lover of the thoroughbred, he bred a number of good racehorses, among whom were Courallie, by Gemma di Vergy, who won the Doncaster Handicap in 1896, and a number of other good races before leaving Australia for India; Invader (by Grandmaster), who included among his victories under the popular colours (pink and black stripes) of Mr. Cook the A.J.C. Sydney Handicap at Randwick, as well as important handicaps at Newcastle and Maitland, and who at the stud sired a number of winners including The Dreadnought, Alaric, Alteration, Myra Bluan, Little Clare, Inquisitive, Attention, Narara, Stockade, Matador, and many others. He also bred Redavni, Victory, Margravine, Tom, and other racehorses.