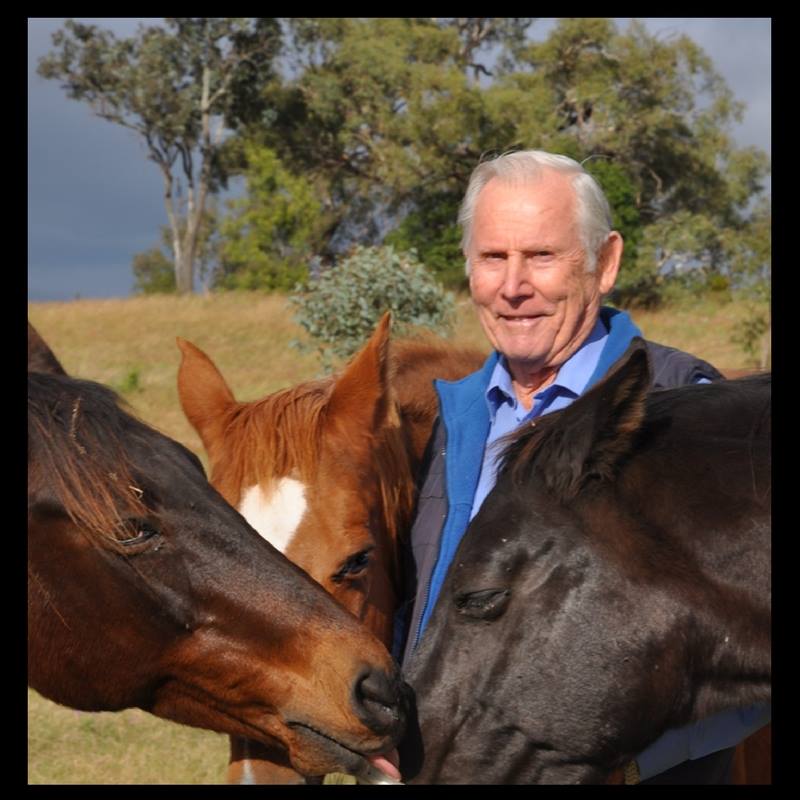 The veterinary profession in Australia has lost one of its great and genuine giants. This applies across all disciplines in our profession but pertains more to the equine veterinary sector as a specialty. Accolades also cover the Australian horse industry in its totality. Even though we think in terms of ‘Pascoe’ and horses Reg’s first post-graduate credential was an MVSc (UQ) in Mineral Metabolism of Dairy Cattle.

There aren’t enough superlatives when it comes to accurately describing Reg Pascoe. I first met him almost 50 years ago at one of Tom Hungerford’s very early presentations on behalf of the University of Sydney Post Graduate Foundation in Veterinary Science. He was most impressive. Another presenter on that occasion was my original mentor Murray Bain. They were a formidable duo.

Over the years from 1967 I came to know Reg Pascoe very well. It was all good; much of it great. We shared the nascence and early progress of the Australian Equine Veterinary Association (AEVA); now the EVA. We met regularly at venues all over the eastern seaboard to ‘build the blocks’. Reg was a permanent fixture at both the AEVA and Bain Fallon. He became the ‘backbone’ or spine. When the Australian College of Veterinary Scientists was born Reg persuaded me to sit for the examinations and help to form the Equine Diseases Chapter. He and Len Fulton were my examiners. I think I only just scraped through! Reg had many connections with my home base of Scone. He very generously travelled overnight 12 hours by ‘bus from Toowoomba to present at a very early fund raising meeting for the AEVA. I picked him up in Kelly Street at 4:00am! I retain the fondest memories of travelling with Reg (and Joy) to the inaugural ISER in Cambridge in 1974 and thence to Kruger Park in South Africa for Maurice Azzie’s never repeated extravaganza. You could learn so much by simply listening to Reg. We repeated the ‘experiment’ in travelling to ISER II at Davis UC California in 1978. This was immensely stimulating and informative. It sewed a seed. Reg’s eldest son John later returned to UC Davis to pursue a stellar career there in Veterinary Science. Professor John Hughes was a great mentor. Most of us had hosted he and spouse Lavonne in Oz since first meeting at Cambridge UK in 1974. Professor John Hughes was the AEVA’s first invited guest speaker to the AVA conference in Melbourne in 1976. Professor O R Adams (Colorado) was the second in 1977. The first Bain Fallon was held in Sydney in 1978.

ISER II in California fulled us all with resolve to present ISER III in Sydney in 1982. Reg was very much part of the organising committee which also included Phil Knight (Gunnedah),  Rex Butterfield (Sydney), Geoff Hazard (Melbourne) and chair Peter Irwin (Adelaide). Ms Audrey Best was the immaculate administrator. I still think this was the biggest and best ‘thing’ AEVA ever did. Yes, I’m biased.

Reg was commissioned by the Fraser Government to report on the feasibility of establishing an Australian Horse Council similar to the American model. I still retain a copy of his detailed and meticulously researched final recommendations. This has now mutated into the Australian Horse Industry Council (AHIC). Reg worked very closely and tirelessly with local Hunter Valley Stud Master John Kelso to set up the inaugural Council.

In 1977 the venereal disease of horses first known colloquially as ‘Jubilee Clap’ (ER II’s Jubilee Year) was identified at the National Stud near Newmarket, Suffolk, England. It quickly escalated. Reg was appointed by the Australian Government to fully investigate the situation overseas. The information he gleaned on Contagious Equine Metritis (CEM Taylorella equigenitalis) was invaluable. He was seen as a crusading ‘saviour’ of the horse breeding industry in Australia. I don’t think he spoke Irish very well?

Reg’s achievements in academia are legend. We were all absolutely astounded at the tsunami-like continuum of credits with Fellowships, Doctorates, further degrees and awards plus multiple publications. We remained in wonderment: ‘How does he do it’? We knew that at least part of the reason was his very special supportive spouse Joy and his high achieving family of four sons.

I was delighted to be involved in the launching of the ‘Provet’ Pascoe Oration at the EVA Darwin Bain Fallon Conference some years ago. We knew this provided recognition in perpetuity with a dedicated Plenary Address at our Annual Convention. What a terrific trifecta of names: Bain; Fallon; Pascoe; forever branded.

There is so much more I could say but will ‘pull the reins’ now. The virtue of a ‘blog’ is that I can both add and edit later.

The family tribute from Facebook I repeat herewith: my sympathies are with them.

A great gum tree has fallen in the forest.

It is with deep sadness that the Pascoe family would like to announce the passing of the legendary Australian veterinarian, Dr Reg Pascoe.

Reg was the founder of the world – renowned Oakey Veterinary Hospital, which he built by hand after he arrived in the town as a young graduate vet back in 1952.

Reg – who was 88 – was one of the world’s leading Equine Surgeons and Dermatologists and he devoted his entire life to veterinary excellence of the highest order.

His love of horses and his deep compassion for them saw him save and transform the lives of both champions and ordinary horses and he gave their owners reason for deep and lasting gratitude.

Reg was awarded the Order of Australia and he was revered and admired right around the world with numerous prestigious awards named in his honour.

Along with his beloved wife Joy, he reared four sons – John, David, Ross and Andrew – who all became either Veterinary or Medical Specialists.

Reg remained devoted to his local community and, when the true extent of the desecration of the Darling Downs by mining companies became obvious – and what the real effect would be on the food bowl and its scarce underground water aquifers – Reg made the courageous decision to stand up to defend his beloved homeland.

He helped to form a committee that hosted the first Food Security Forum and broadcaster Alan Jones flew up to speak at the Forum – which was also televised by Sky News. The forum then became the forerunner of all the major Farming Protests that have been held right across the nation.

Reg was a man of high standards and high ethics. He was a true patriot who loved and honoured his country. He worked tirelessly to protect it and always do the right thing by it.

He never thought that, at the age of 82, he would be standing out on the freezing plains in winter holding up placards at an anti-mining protest trying to protect one of the nation’s great food bowls but he stood there, determined and defiant to the very end.

Reg remained involved, productive, active and intellectually curious until the very moment of his passing. He always worked for his community and took care of his magnificent sprawling garden, spending precious time with Joy, his beloved family and his eleven grandchildren.

Reg Pascoe was a true leader and a legend in every sense. They do not make men like that anymore, and we are all so much the poorer for his passing.

The Pascoe family would like to advise they plan to hold a private family funeral.

This will then be followed at a later date by a public Memorial Service which will be a wonderful celebration of his life.

A time and date will shortly be advised.

Herewith tribute from Jeffrey Wilkinson of the EVA

I was surprised and much saddened to get the email from Bill Howey telling me that Reg had died. This must be a big blow and very sad loss for you and all the family and please know that you have the love and warm thoughts of Sandra and me.

I had not heard anything about Reg and his health from anyone so I’m hoping very much his death has been as quick and painless as possible. I doubt he would have lain in bed easily for a long time with a chronic ailment.

I have many fond memories of Reg – indeed of you both and your wonderful hospitality – and I am truly proud to have known him and to be able to call him a good friend and supporter. A veritable “giant” in our veterinary profession, especially the equine branch of it, and without doubt the “venerable grandfather” of equine veterinary science in Australia. When he and either or both of your veterinary sons came into a conference room, it was widely held that the “Pascoe mafia” had arrived and you’d better watch out – they would ask some telling questions of any speaker and could always back up any comment they made with a very large number of cases they had seen. And I will never forget Reg at a lovely dinner party you put on in your home huffing and puffing about your youngest son (I’m sorry I can’t remember names) who had announced he had decided to study “pharmacy” at university. You already had 2 vets and 1 medic if I remember correctly, which was a damn good score. But Reg’s comment (with a twinkle in his eye!) was – “I didn’t breed a colt to become a bloody chemist”.

A lovely man and I’m sure you’ll all miss him. I hope very much that the funeral and memorial service all go well and we’ll certainly be thinking of you and with you in spirit.

Thanks for letting us know of this sad news.

Reg was both a legend and a giant among equine veterinarians, the Mt Everest of the Australian profession.

I doubt anyone could repeat his contribution to equine veterinary science, the horses of SE Queensland, the vet profession in QLd, the AEVA and EVA, the Australian horse industry and so many other spheres of influence.

His willingness to share his knowledge, albiet sometimes at the expense of unwary Bain Fallon speakers, meant that he had a profound influence on countless other equine vets in Australia and other countries.

His view that we equine vets existed to help improve the health and welfare of horses, inspired many and provided a contrast to the view that every time a vet looked at a horse or discussed it with an owner that was a revenue source.

Without wanting to pump my own tyres up, one of my proudest achievements is to win an EVA Pascoe award.