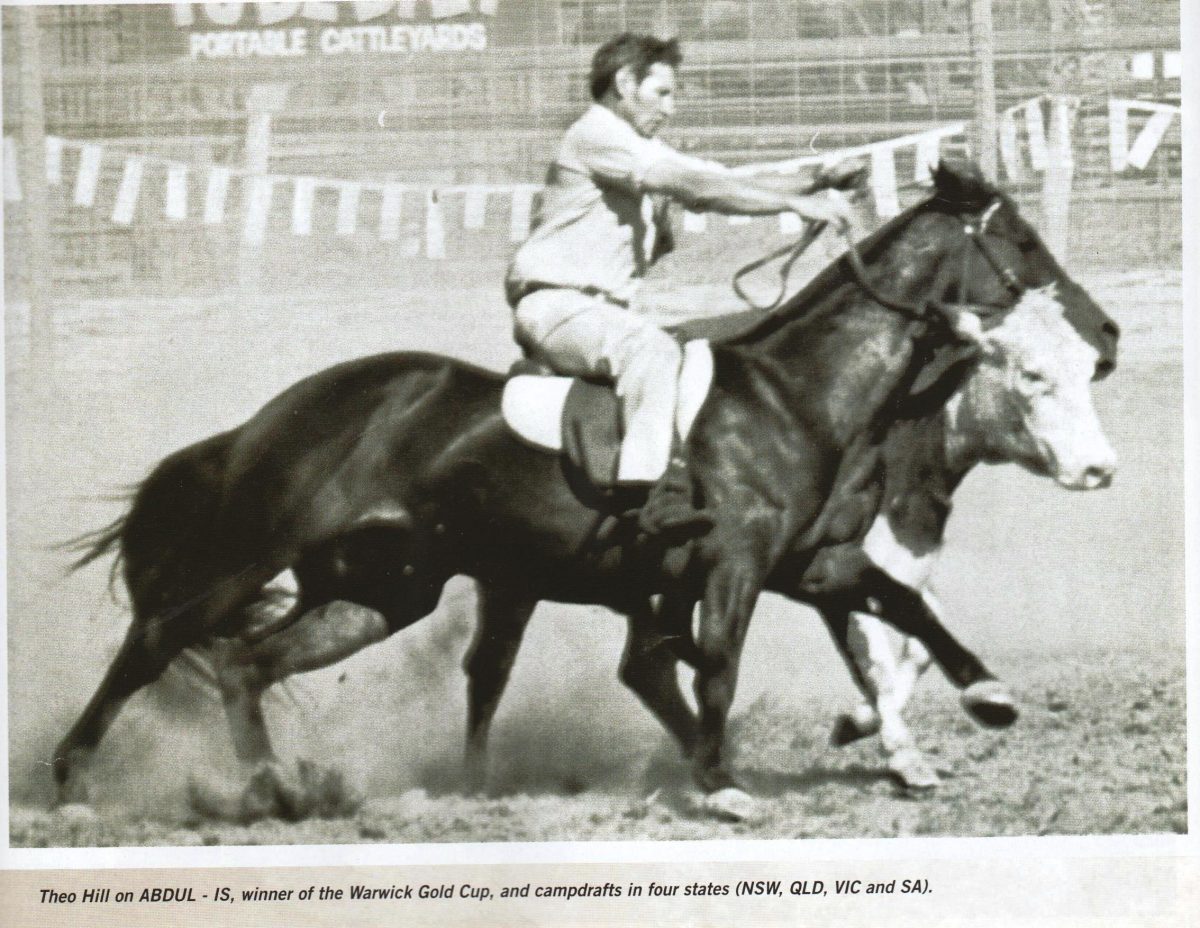 Those who had the privilege of seeing ABDUL – IS in the campdraft arena will never forget the incredible athleticism of this great horse. Foaled in February, 1964 at Comara Station on the North Coast of New South Wales, ABDUL – IS was bred by the great horseman and stud master, Theo Hill.

Theo Hill and Harry Ball, breeder of ABBEY – FS, were great friends and organised to swap the loan of a broodmare for a service fee. Theo put his great mare COMARA PRINCESS – FM (by Bulga Boy) to ABBEY – FS for his service and the result was ABDUL – IS.

Comara was a beautiful but mountainous property that required horses to work the cattle, and after ABDUL – IS was broken-in he became Theo’s main work horse. As a four year old he was lent to Jack Smythe to compete at two rodeos, at which he ran two seconds. Theo and his family moved back to Quirindi in 1969, but Theo left ABDUL – IS at Comara for the manager to ride. Unfortunately they did not get on, so in 1971 ABDUL – IS was brought over to Qurindi.

In 1971 he won the Maiden campdraft at Guyra, and in 1972 he started to chalk up an amazing run of wins. In a very short career he won 35 Open campdrafts, with his major wins being the Warwick Gold Cup in 1973, the World Champion Campdraft in 1974, and the Expo Championships in 1975. He won campdrafts in New South Wales, Queensland, Victoria and South Australia. He was retired from campdrafting at the age of 11, and stood ta stud until his death on 4th January, 1989, at 24 years of age.

During his stud career, he stood alongside his great sire ABBEY – FS. In hindsight this was probably the greatest two Australian Stock Horses to stand at stud together. Theo Hill has said that he always regretted he did not keep more ABDUL –IS mares.

ABDUL –IS proved a great sire in his own right, and with over 7,500 descendants is the eighth most influential sire in the Australian Stock Horse Stud Book.