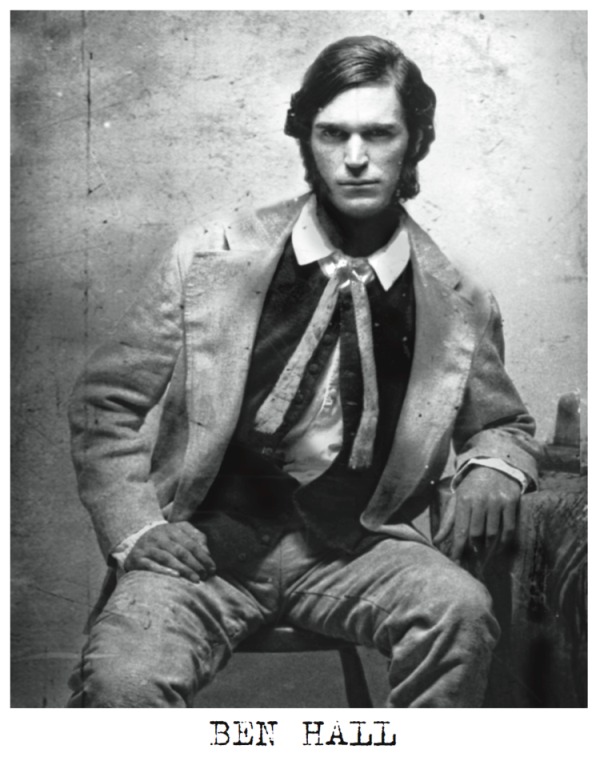 There must have been something about early Murrurundi which engendered free-spirited entrepreneurs with a proclivity for making acquisitions independent of reliable and/or proven original ownership? Maybe it was simply a sign of the times? It must have been tough. In the mid-1800s Murrurundi was the northern limit of settlement; genuine frontier territory. No wonder the likes of Edward Davies and others headed for Nowland’s Gap at the top of the range possibly believing themselves beyond reach of the law? Most were eventually disabused of this notion and paid the ultimate price. Ben Hall was such a person raised into this environment. He probably believed anything was worth the risk? Some of his relatives still survive around Murrurundi and are both prominent and most worthy citizens. You have to tread warily in any dialogue.

Ben Hall was born on 9 May 1837, at Maitland, New South Wales, Australia now East Maitland, New South Wales (though there was an 1865 newspaper report incorrectly naming Breeza as his birthplace). His parents were Benjamin Hall (born in Bedminster, England, in 1805) and Eliza Somers (born Dublin, Ireland 1807). Both of Ben’s parents were convicted for minor stealing offences and transported to New South Wales, and first met each other as convicts. Benjamin received his ticket of leave in August 1832, but it wasn’t until 1834 that Eliza was granted her freedom. They were married the same year and moved to the Hunter Region. The couple had numerous children; Ben Junior was the fourth child and third son.

Benjamin Senior found work as overseer on the Doona run near Murrurundi, as an employee of Samuel Clift, while Eliza was employed as a domestic worker at Clift’s home in Wallis Plains, East Maitland. Clift also had country at Breeza possibly giving rise to the anomaly of Ben Halls’ birthplace. Following a severe drought in 1838-9, Clift had to move all his stock back to the Hunter, so Benjamin lost his position at Doona. However, during his time working in that area, he had discovered an isolated valley north of Murrurundi with permanent water and good grazing. Here Benjamin built a rough hut and began collecting any wild cattle and horses he could find in the hills. Then in mid-1842, he bought a small block of land in the newly created village of Murrurundi, where he established a butcher shop and also sold fresh vegetables. It was at Murrurundi that Ben Junior attended school. As a Shire Councillor I once had the pleasure of presenting trophies at the Murrurundi Public School speech day in celebration of 160 years. Ben Hall was pointedly not listed among their most distinguished alumni!

About the end of 1850, Benjamin Senior moved down to the Lachlan River area, taking with him the children Ben Junior, William, Mary and his stepson Thomas Wade. It appears that Ben Junior never returned to Murrurundi, although his father did in 1851. Young Ben spent his early years working with horses and cattle, developing his expertise in stockwork and bushcraft, skills which would later serve him well.

He and his associates carried out many audacious raids across New South Wales, from Bathurst to Forbes, south to Gundagai and east to Goulburn. Unlike many bushrangers of the era, Hall was not directly responsible for any deaths, although several of his associates were. He was shot dead by police in May 1865 at Billabong Creek. The police claimed that they were acting under the protection of the Felons Apprehension Act 1865 which allowed any bushranger who had been specifically named under the terms of the Act to be shot and killed by any person at any time without warning. At the time of Hall’s death, the Act had not come into force, resulting in considerable controversy over the legality of his killing.

Hall is a prominent figure in Australian folklore, and has inspired bush ballads and films. A memorial called Ben Hall’s Wall is located in Breeza, south of Gunnedah. Ben Halls Gap is a small section of State Forest named after the bushranger’s father, and is located south of Nundle.