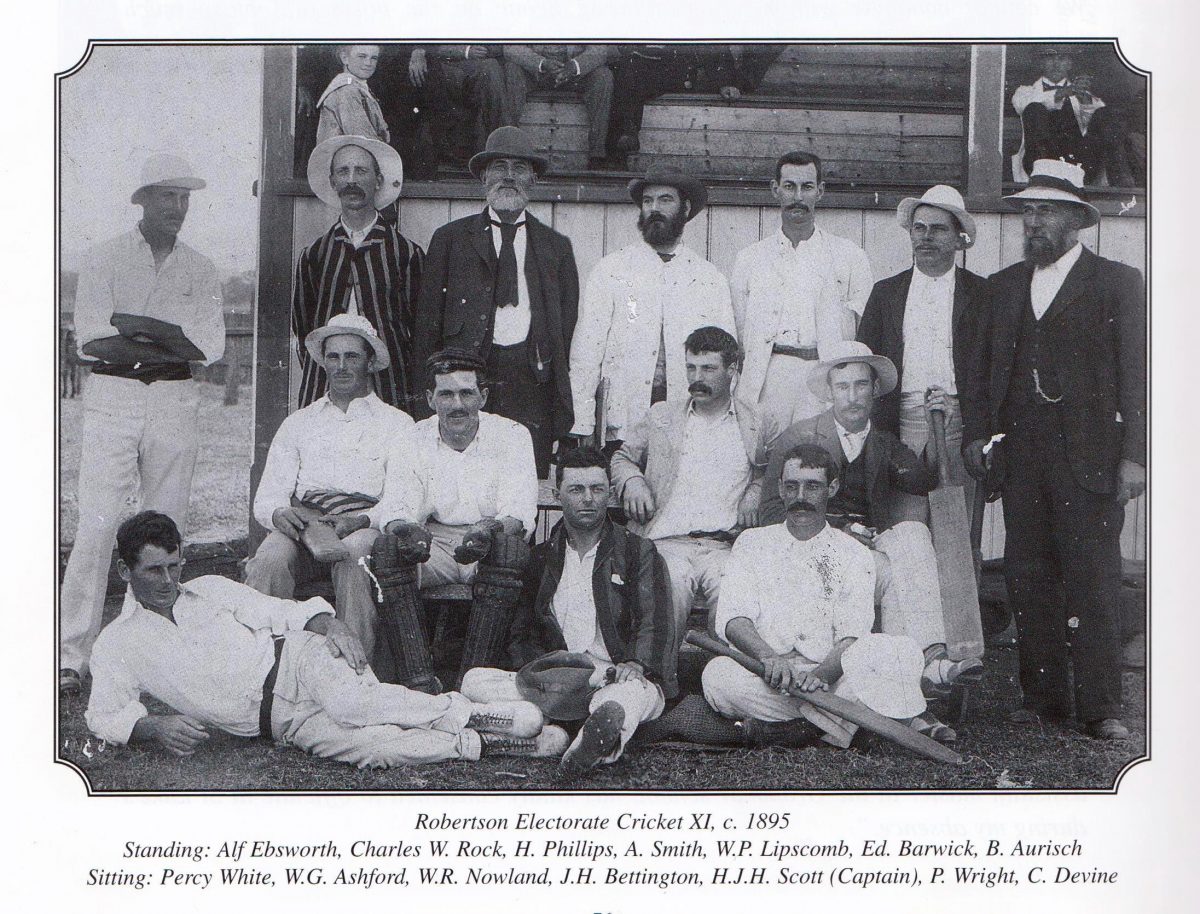 ‘The Inn, The Dentists and The School’ (Federation Publication No. 2; Published by Scone and Upper Hunter Historical Society 1998) by Mace Bain, Roger Humphreys BDS and Gillian Blandford Hayes

Charles W Rock is standing second from the left at the back with hat, Cambridge blazer and Merv Hughes lookalike moustache.

Charles W Rock eventually succeeded William Pulling MA as Headmaster of Scone Grammar School early in 1895. In the interim then incumbent Assistant Master William Henry Walker ran the school. C W Rock was a Cantabrian like William Pulling. Born in 1863 he grew up in Tasmania. He attended Launceston Grammar School and was in the 1st XI cricket team. A brilliant scholar he attended Clare College, Cambridge University UK where he was considered the “best amateur (‘gentleman’) cricketer in England”. He returned to Tasmania in 1886 as Master at Launceston Grammar School. In January 1888 he was selected to play for Australia in a Test Match versus visiting the England team but illness prevented him taking up his selection.

Since moving to Scone in 1895 C W Rock contributed materially to forming the famous Robertson (now Upper Hunter) Cricket association then regarded as one of the greatest nurseries of the game in NSW. A son, Dr Hugh Rock, was also a potential Australian XI batsman but he too had to sacrifice the opportunity to take up a medical appointment in Newcastle.

C W Rock ran the Scone Grammar School in the same able manner as is predecessor William Pulling but by June 1897 he had left Scone to take up the post of Headmaster at Newcastle Grammar School. Charles W Rock subsequently went to the Kings School, Parramatta from 1901 – 1906 and again from 1920 – 1927.

I think it is very fortunate that emerging municipality Scone enjoyed the patronage and stewardship of such outstanding individuals as J A K Shaw, Dr H J H Scott, William Pulling and Charles W Rock. Not long after their domain Dr Oswald Barton, son of Sir Edmund Barton arrived to establish a ‘Barton dynasty’ which prevailed for over the next sixty years.