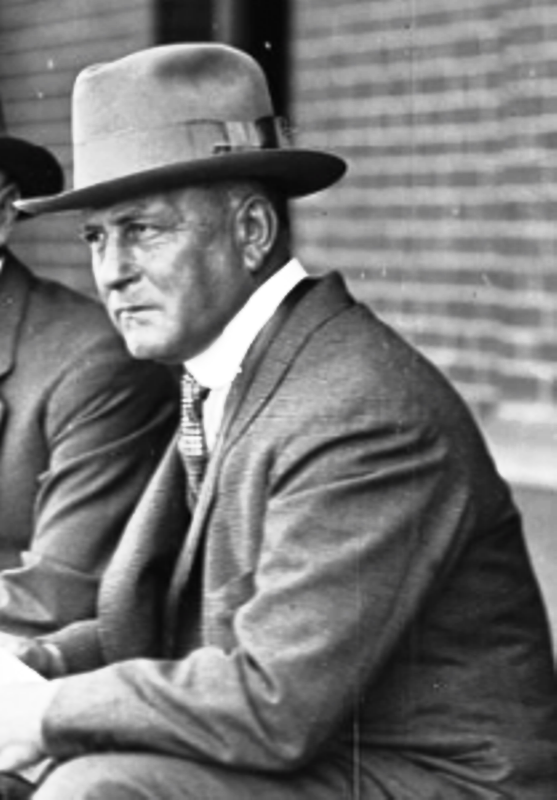 Old Time Racing and Sport: And Those Who Contributed To It

Acknowledge: This article appeared in the Scone Advocate around the 1950s and was written by A. F. S.; possibly one of the Smith family who had control of the newspaper at that time.

At the beginning of spring in 1946 the man generally acknowledged as the finest trainer of stayers in Sydney, had never won a Derby either at Randwick or Flemington.  The figure in question was the 71-year-old Dan Lewis.  A Derby victory might have been missing from his curriculum vitae, but he already had four Sydney Cups to his name.  A true gentleman of few words, and those few spoken in a soft and courteous manner, Dan Lewis had cut a distinctive figure on Sydney racecourses over many years with his trademark bowler hat, bow tie and pipe.  He was to remain reticent throughout a training career crowded with success in which his best two years were still to come, although he never did manage to top the Sydney trainers’ premiership.  Born in Auckland, New Zealand, in 1875 the son of Henry Lewis, a publican, Dan came from a large and well-educated middle-class family that numbered among his brothers both a doctor and a solicitor.  The young Dan was the only son ever attracted to horse racing.

Mention of Dan Lewis, a prominent owner-trainer, now nearing an age when memories are just that. He who has led in six Sydney Cup winners, a Melbourne Cup winner and hundreds of other winners all over the Commonwealth, getting his “kick” at the pigeon matches at Scone, then held near the site of the present Scott Memorial Hospital.

The writer, then a lad, is the last of the pristine trappers employed for the job by Dick Solomons, then the proprietor of the Golden Fleece Hotel, in whose backyard he had a pigeon loft and bred the birds for the sport, which attracted the best shots and back-markers in the land, but these visitors invariably had had it put right to them by Alick Campbell, of Scone, who actually pulled off the famous Monte Carlo in one year, an event open to world-wide competition.

At this time Dan Lewis was then laying (or taking the odds) – his brother Hyman, was his penciller – counted three hundred sovereigns after a day’s shoot. It was a big day for Dan, and he counted the yellow pieces again before finally snapping his bag. He cut even on the second day.

One of the “big shots” to make his presence felt at Scone was the widely known McIntosh who at times fired from the 31 yards mark. He used the pseudonym “Lockley”.

But the biggest winner was usually the promoter. All unharmed birds returned their loft, to be used another day. And for many a bird that found its way to the loft, Dick Solomons had the trappers to thank. By clandestine means, the pigeons, before being placed in the traps, had their tails plucked.  Result, the moment the traps opened, the birds, instead of rising to survey their surroundings, shot like an arrow from the bow in the direction of and beyond the boundary line. “Good bird, that” was the remark heard from shooters and patrons alike.

Not even Dick Solomons himself ever accounted for the appendage feathers when he had a muster of the loft for the next day or days subsequent. Hence the writer and his youthful associates had unwittingly contributed to the wealth of Dan Lewis and Dick Solomons alike. And whereas at the end of the day the shooters “shelled out” most liberally for trappers, all the quartet ever received from the promoter for their day’s work was a paltry florin each. The promoter pocketed the balance.

Dan Lewis, a New Zealander, had a very humble beginning in the realm of sport, but success never went to his head, and he has never forgotten his friends of yesteryear, whether it be at Royal Randwick or on his periodical, but now less frequent, visits to the town and district.

He won his first race at Spring Ridge, near Quirindi, with Freddie Snell in the saddle, and later landed a double, at the Belltrees shearers’, or picnic meeting with horses owned by James Poynting, that anything but impeccable publican who hung his sign from the old Willow Tree Hotel in Liverpool Street.

He went from success to success after he came into possession of Rue Victoria, a Ruenalf gelding bred at Belltrees which changed hands at auction for £5 because he was afflicted with a most pronounced stringhalt, which in no way deterred his ability to gallop, for he won many races from Brisbane to Randwick, taking the Brisbane Cup of 2 miles in his stride. But there was no paddock of lush pastures for the aged gelding to reflect over his past glories. Saw him leading a big draft of remounts passing through Aberdeen one afternoon, his probable destination being overseas to lump bigger burdens than ever given by the handicapper.

Ernie Marks, now hibernating out Merewether way, was one of the best known bookmakers of these parts during racings’ past history in the Upper Hunter. Writer vividly recalls his first real “lift” when swinging the bag. It was at an Aberdeen meeting when the “bolter” came home in the principal event. It was Tea Leaf, a brown mare owned by Sid Smith, of Aberdeen, and by the Merton-owned Dalmeny. Ernie Marks bagged the best part of a couple of hundred pounds, and when the car broke down near Turanville gates on the way home, he was to be seen sitting on the running-board counting and re-counting his gain. More than likely Arthur Fox, still going nicely at Bunnan, was his penciller.

Then there were Jim Jewel and Jim Casey, of Newcastle, likewise James (Grafter) Kingsley, and “Jumbo” Barnett of Cetigne fame, from Sydney. Well remember the afternoon Casey landed the main double at Scone with his dandy mare, After Twelve, another Belltrees bred, by Ruenalf from After Six. And how she did win! Six lengths first run, ten lengths at her next start, with penalty up.

After harking back to Ruenalf, a son of Grand Flaneur, there was the occasion when his son Ruenalf II, mentored by George Hopper, who guided the destiny of the then Crown and Anchor Hotel (then the Empire, now the Thoroughbred), Scone, planned a great coup with his brilliant galloper.

He aimed high – the Caulfield Cup. The horse arrived in Victoria, and accompanying George Hopper was none other than Aldino Erranati, otherwise colourful character known as “Italian George”. Each supported the horse to win £10,000 at long odds.

The great day dawned, but the horse finished down the straight, George Hopper was not only disappointed but also chagrined. He told the rider, one of the best known in the game, what he thought of the run. He went further. He reported it to the stewards, who brushed him aside, advising him not to be a “squealer”, Opper, as Italian George called him, offered to donate £500 to any charity named by the stewards if the horse failed to reduce the time taken to run the Cup on the same course next morning. This offer was likewise treated lightly by the officiating gentry. Ruenalf II, absolutely and unknown quantity over two miles had also been entered for the Melbourne Cup.

He was saddled for the premier race in the land, but with another rider up. The “boy”, who did anything but carry out the instructions given him, “went for the doctor,” so to speak, the moment the webbing ascended. The Scone horse was soon showing a clean pair of heels to the opposition, and did not surrender hid lead until the last hundred yards of the race, with the gallant prad, still fighting on, going to the post just beaten out of a place. George Hopper was afforded every reason to assert his claim that Ruenalf II was a certainty beaten in the Caulfield Cup.

If any person should have made racing pay it was “Jumbo” Barnett, who almost invariably brought a full box (three horses) to the Scone outings. But they were usually given an “airing” and taken to Quirindi and Tamworth with the same ends in view. Eventually they were produced at Armidale, where the “big note” was placed. But by the time the horses had arrived back in Sydney, Barnett had smilingly collected full rebate both ways from all four clubs! When the clubs simultaneously resolved to put an end to his smart way of financing transport, “Jumbo” bypassed the meetings of all concerned.