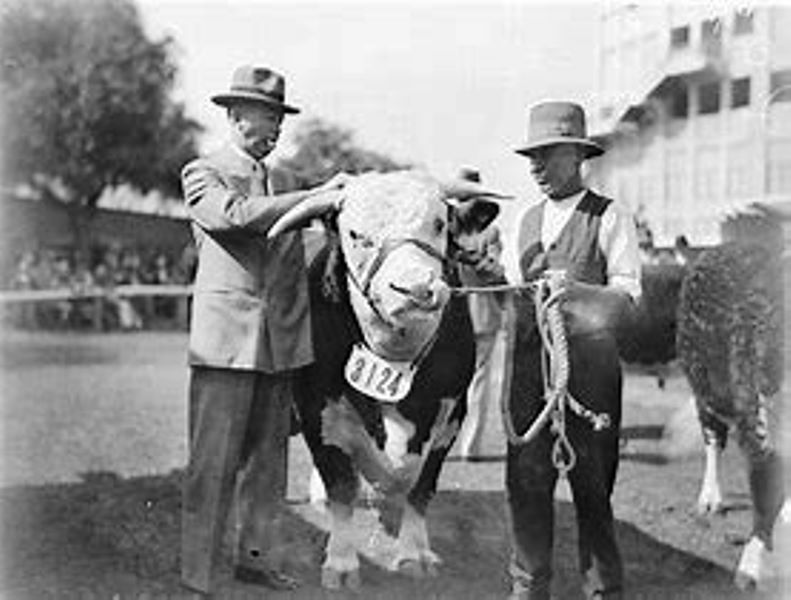 The Hordern family name in Australia is justifiably famous. There has been a long association with the Upper Hunter commencing with Sir Samuel’s acquisition of the Petwyn Vale Stud at Wingen near Scone in the early 1900s. This was a time when Sir Samuel was greatly enthused with thoroughbred racing and breeding. He became chairman of the Australian Jockey Club as well as President of the RAS of NSW. His grandson Sam (Junior) later established his Quarter Horse Stud at nearby Dry Creek Parkville and also ‘Halloween’ at Thompson’s Creek, Dartbrook.

It was of great interest to me that in the late 1800s and early 1900s Sir Samuel Hordern developed a very close association with the Day family of Newmarket, Suffolk, England. This was the family which produced outstanding trainers. Family member Fred Day was one of the most eminent equine veterinarians to ever practice at the headquarters of English training and racing. Since the mid-1960s my original practice at Scone, now Scone Equine Group, introduced and maintained an exchange ‘shuttle’ service of equine veterinarians and veterinary nurses between the two practices.

As usual Ian Ibbett has captured the whole story in his inimitable treatises as herewith:

This article was published in Australian Dictionary of Biography, Volume 9, (MUP), 1983

This is a shared entry with Anthony Hordern

On his father’s death in 1909, Hordern was fully trained to assume control of the remarkable Italianate Palace Emporium, opened in 1906 as universal providers. ‘The Empo’, run with imagination and enterprise, employed some 4000 people and dealt in ‘everything from a needle to an anchor’, mostly manufactured in the firm’s Sydney factories or imported by its own agents abroad. Their familiar household catalogue was known as the ‘Bush Bible’. In accordance with his father’s will the firm was sold to a private company in 1912; Hordern became governing director. With inherited wealth, particularly from the sales in 1918 of his father’s city and suburban properties, he perhaps lacked the trading flair that called for ruthlessness to keep control of the vast emporium and abreast of modern merchandising. He retired from the company in 1926 when it was sold to public investors.

A council-member and honorary treasurer of the Sydney Chamber of Commerce, Hordern attended congresses of the Chambers of Commerce of the British Empire in London in 1912 and 1924. He was president of the Master Retailers’ Association, a vice-president of the Employers’ Federation of New South Wales, chairman of the Australian Mutual Provident Society in 1932-47, and a director of the Royal Insurance Co. Ltd, the Commonwealth Bank of Australia, and Perpetual Trustee Co. He contributed generously, as did Anthony, to the purchase in 1918 of Cranbrook, Bellevue Hill, for a Church of England boys’ school and to the establishment in 1926 of Kambala, Rose Bay, for a Church girls’ school. He was a director of Royal Prince Alfred Hospital in 1913-39 and chairman in 1933-34.

As president of the Royal Agricultural Society of New South Wales in 1915-41, Hordern was largely responsible for the growth of the Royal Easter Show from a small fair to one of the world’s greatest agricultural shows. Despite the annual protests of Archbishop Wright, he kept the show open on Good Friday.

At Retford Park, Bowral, Hordern vigorously pursued the improvement of his stock. He imported Jersey and Ayrshire stud cattle, Clydesdales, thoroughbred mares, hackneys, hunters and Welsh ponies, and exhibited them at the Easter Show. He also bred deer-hounds and Scotch and fox-terriers. His love of horses extended to the turf: he was a committee-member of the Australian Jockey Club in 1917-44. With Artilleryman (in partnership) he won the 1919 Melbourne Cup and A.J.C. Derby, and the Victoria Racing Club St Leger in 1920; next year his Violincello won the Caulfield Cup. Like his father, he also bred and raced homing pigeons. He visited England and Europe every few years following his stockbreeding and racing interests and gathering ideas for the R.A.S. For the first exhibition in 1927 of the New South Wales Applied Art Trust, Hordern presented a collection of Damascene ware.

At St Jude’s Anglican Church, Randwick, on 4 March 1900, he had married Charlotte Isabel Annie (d.1952), daughter of (Sir) John See. They lived at Strathfield and later bought Mount Adelaide at Darling Point, which was demolished to build Babworth House in 1912; designed by Morrow and De Peutron, it was considered the finest Art Nouveau house in Sydney. Hordern belonged to the Union, Australian, Warrigal and New South Wales clubs, played golf at Concord and Royal Sydney Golf clubs and sailed with the Royal Sydney Yacht Squadron and Royal Prince Alfred Yacht Club. He was an early member of the (Royal) Automobile Club and president in 1910-12 and 1914-30.

From a public viewpoint Hordern was a spectacular and versatile character with a zest for living. Tall, robust, good-looking and well-dressed, he was described as ‘the last of the elegant Edwardians’. To one he could converse on silks and satins, to another on butter-fat, on both with the knowledge of a connoisseur. He was knighted in 1919 and appointed K.B.E. in 1938. Lady Hordern avoided the limelight and devoted herself to charitable works and her gardens at Retford Park and Babworth House. She was a foundation trustee in 1938 of Morton National Park where the Lady Hordern Falls honour her interest.

In 1946 Hordern injured his hip and became a semi-invalid; social changes annoyed him. He was a diabetic and an early user of insulin. On 3 June 1956 he died at Babworth House and was cremated after a service at St Mark’s, Darling Point. His estate was valued for probate at £279,615. He was survived by his son Samuel (1909-1960) and by two daughters.

Anthony was educated at St Mark’s Crescent Grammar School and in England at Hitchin Grammar School, Hertfordshire, and Worcester College, Oxford, in 1907-08. After returning to Sydney he worked in Anthony Hordern’s and its offices in London and New York; he sold his interest in the store in 1924. He had married Viola Sydney (d.1929), daughter of Brigadier General Edmund Bingham, R.E., on 27 February 1911 at St Paul’s Cathedral, Melbourne. In 1915 he sailed for Egypt to assist the Australian Red Cross commissioner (Sir) Adrian Knox. Granted the relative honorary rank of major in March 1917, he went on to France. Appointed C.B.E. in 1918 he returned to Australia in December next year. He was again a Red Cross commissioner in World War II.

In 1910 Hordern had bought rich land at Bowral where he built Milton Park, created a model farm with Shorthorn, Guernsey and later polled Hereford cattle and Romney Marsh sheep, and established a now famous garden. He leased Wilton Park near Picton (1909-27) where he continued the breeding of horses (established for Anthony Hordern’s delivery carts) with thoroughbreds, Clydesdales and Welsh ponies with the notable stallion Greylight. He took a brief interest in racing but gave up after he was criticized for running two horses in the 1921 Moonee Valley Cup. He imported and bred a variety of dogs, particularly gun dogs. Hordern owned Bywong at Gundaroo (1915-23) where he established a stud flock of Lincoln sheep which he presented to the State government, and Mungadal at Hay (1923-63) where he improved the merino flock established by C. W. Simson in 1865 with Boonooke merinos from O. R. Falkiner. He later owned Wingadal at Bowna and Ulladulla at Holbrook. At all his properties he made many improvements and used his wealth to import the best stock; however it was not only his patronage that ensured their success but rigorous culling to achieve his ideal animal.

A council-member of the New South Wales Sheepbreeders’ Association for nearly fifty years, Hordern was president in 1931-37 and 1954-57. He promoted interest in showing in pens of five to obtain a higher overall standard and won the Stonehaven Cup (for pens of five) at the Sydney Sheep Show in 1950-52 and 1956. He was also foundation chairman of the Guernsey Cattle Society of Australia and foundation president in 1931 of the Australian Pony Stud Book Society. A vice-president of the R.A.S. in 1933-58, and councillor for forty-four years, he chaired its cattle committee from 1938. He helped his brother Samuel to build up the show and, a regular exhibitor, won many major prizes with his horses and cattle. At Milton Park he bred Mandarin ducks, native and exotic finches and parrots and produced colours in budgerigars and canaries never before seen.

In his youth, Hordern was a keen polo-player with his own team, the Wanderers, and provided mounts for the Ashton brothers for their first overseas tour; later he was president of the New South Wales Polo Association. He enjoyed racing speedboats, winning in 1912-13 the Australian speedboat championships with his Kangaroo, and later big-game fishing; his craft Seeka served with the Australian navy in World War II. He belonged to the Union, Australian, New South Wales and Royal Automobile clubs.

At All Saints’ Church, Woollahra, on 3 March 1932 Hordern had married Ursula Mary Bullmore (d.1961). She was fashion editor of the Australian Women’s Weekly in 1946-57 and influenced noteworthy changes to the Milton Park landscape. In the 1950s they built a round house, designed by Guilford Bell, at Point Piper. Hordern died at his apartment at Point Piper on 18 April 1970 and was cremated with Anglican rites. He was survived by a son and one of the two daughters of his first marriage and by two daughters of the second. His estate was valued for probate at $985,048.

Affectionate and generous, he hated publicity. His eye for animals which he loved, his skill in their breeding and unfailing vision for future trends were his greatest strength.