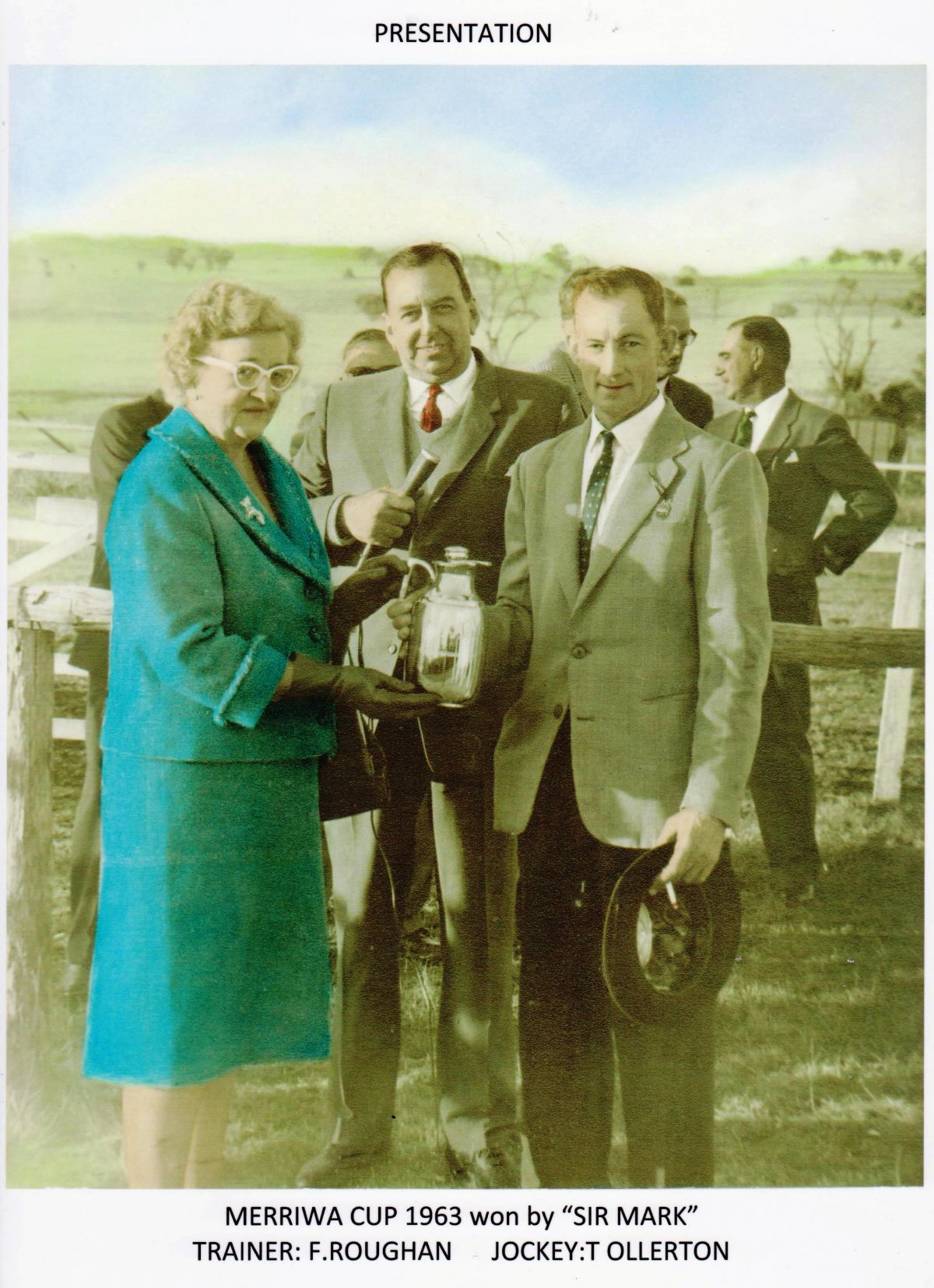 Merriwa Race Club President Mr Geoff Hordern of ‘Pitlochry’ Merriwa holds the microphone while Miss Thelma McMaster of ‘Dalkeith Station’, Cassilis presents the trophy to trainer Frank. Like John Hyslop and ‘Brigadier Gerard’ Frank knew very well ‘you keep the best company for yourself and the worst for your horses; place them where they can win’.

Acknowledgement: Mrs Doreen Roughan and Wayne Roughan of ‘The Ranch’

I could have used several other outstanding ‘action’ images of Frank provided by Doreen and Wayne but I’m restricted to only one on my ‘blog’. His depiction as a shearer might have been more apposite; but this one is the ‘sanitised’ version of Frank. He was a man of many parts; and one of the most genuine ever born!

This is yet another in my series of ‘Local Legends’. The objective is to preserve for posterity the rich lode of pure gold stories pertaining to real Scone identities which might otherwise be lost? Already I have paid tribute to Reg Watts, Shorty Cribb, Bobby Palmer, Cliff Ellis, Ron Jeffries and made reference to several others. The late Frank Roughan ranks up there with any of them. People around Scone still speak reverently about Frank and his exquisite skills as a shearer. He earned and kept his place as perennial Number 1 on the board as a regular achiever in the elite 200 per day Club. However like many of his genre, gender and generation Frank was multi-skilled in a way that few aspire to today. Bush skills were paramount to employment and survival. The ‘school of hard knocks’ and the ‘university of life’ are stern tutors. Frank could turn his hand to almost anything. Apart from shearing he earned his stripes as a racehorse trainer, horse breaker, rodeo roughrider, bull rider, camp drafter, farrier, fencer and all round stockman. His name adorns the honour board (or ‘rail’) in the tribute to our Rodeo Cadre in Coronation Park just outside my main gate. Apart from anything else Frank was also nature’s gentleman; and a champion bloke. I never ever heard him use foul-mouthed language. ‘By jingo’, ‘by gee whiz’, by jeepers’ and ‘by crikey’ were about as robust as it ever became.

I take the liberty of transcribing the eloquent and sensitive eulogy presented at his memorial service in December 2007. It’s much better than I could possibly have written myself. I have only marginally manipulated the original text.

Frank Roughan was born at Muswellbrook on 11 December 1929, the son of James and Verlie Roughan. He was one of eight children; four boys and four girls; Jack, Jim, Frank and Eris; Essie, Carmel, Pauline and Norma.

As a boy he helped his parents on the family farm at McCully’s Gap near Muswellbrook. Leaving home at 14 years of age to become a shearer, he worked at sheds all over NSW including Narrabri, Wee Waa, Walcha and as far south as Cooma. He quickly gained the reputation as the fastest ‘Gun Shearer’. In the mid-1950s Frank was fabled as being among the very best. Wherever reputations were being discussed among his peers, Frank (who was known by the nickname of ‘Smalley’) would invariably be one of those named in discussion. It was not only his speed that made him stand out but also the quality of his workmanship. People who knew him and were taught to shear by Frank described him as a wonderful tutor, with an eye not only for quantity but quality of outcome.

During the off season Frank worked as a fencer. It was at one such time that he worked on a farm which is now part of the Sporting Complex near the Scone Golf Club. This farm was owned by Mr and Mrs Jim Fraser who had a young daughter by the name of Doreen. Frank and Doreen fell in love and were married in 1954 at St James’ Catholic Church in Muswellbrook. They made their home in Scone, initially in Kingdon Street and later at “The Ranch’ off Gundy Road. They had four children; Rosalie, Wayne, Dennis and Andrew. There remains the legendary story of Frank riding his horse through floodwaters in 1972 to deliver fresh swaddling clothes for baby Andrew trapped with his mother Doreen at her parents’ house in Gundy Road opposite Rotary Park. Legend has it Frank had to extend his boots forward over the wither to prevent soaking in the rising inundation reaching up to the horse’s belly. Doreen was not too impressed with the clothes Frank selected!

Frank became a horse trainer in Scone during the 1950s and 1960s and had a number of jockeys working for him including apprentices Tom, Billy and Jim Ollerton. (Tommy has just told me all three Ollertons each won a race riding the same horse trained by Frank). In seeking to manage his horse training and shearing commitments, he would start his day at 3:00am, feeding and working the horses, travel to his current shed, and, after doing his 10 hours, return home to feed and work the horses well into the night. He was a successful trainer, entering horses at meetings at Sydney, Newcastle, Wyong and Gosford as well as locally. His best wins were the Muswellbrook Cup in 1960 with ‘Furdan Valley’ and the Merriwa Cup in 1963 with ‘Sir Mark’. All three Ollerton boys won races on his horses.

Frank passed away peacefully at the Scott Memorial Hospital in Scone on 21 December 2007 surrounded by his loving family. The nursing staff at the Hospital had all ‘fallen in love’ with Frank by then and counted as his ‘extended family’.

Frank was a man of deep and abiding faith in the Catholic Church, having raised his children to be men and women of prayer who understand the importance of the church in their lives. He loved people and they loved him. He was highly regarded as a sincere man whose friendship was epitomised by loyalty and trust.

His basic tenet was to love and serve his fellow man wherever he may be. He always endeavoured to live by that principle. I was a work colleague in the police service of Frank’s younger brother Eris who I held in the highest regard. I latterly learned to respect Frank with the same high esteem.

In his formative years Frank tried his hand at boxing in the Maitland area joining Jim Clark and others to make up a car load. In the 1970s Frank and family joined the Scone Athletic Club. Frank was elected as President for a number of years and was Official Starter for running events. As President Frank led the club to ‘Triangular Carnivals’ between Muswellbrook, Denman and Scone. There was an annual pilgrimage to the Area Championships in Newcastle where Frank also officiated.

Lawn Bowls was another love of Frank’s. He played consistently throughout the 1970s to the 1990s for both the Scone RSL and Scone Bowling Clubs. He won many single, doubles, triples and pennant tournaments representing both clubs.

Frank was also President of the Scone Clay Target Gun Club becoming a Life Member. On his own admission Frank was a better ‘gun shearer’ than a ‘gun shot’ but he greatly enjoyed his time at the sport.

Throughout his nether years and even before Frank shore all the pet sheep in the district ‘gratis’. He would even take his portable shearing gear to different locations and shear anything between 1 to 20 sheep. He refused cash payment; but not a cold stubby!

Retiring from shearing in 1979 due to an injured hand (RSI) Frank worked at the Aberdeen Tannery for 3 to 4 years. He later managed the Scone Saleyards for 13 years before finally retiring at age 66. Sadly Frank’s retirement years were sullied by bouts of ill health. ‘Q Fever’ was an occupational hazard for all those working closely with ruminants. It’s like very severe Influenza and Frank endured a doubly bad bout. In 1998 Frank was diagnosed with Lung Cancer and had a large portion of one lung removed at RPA in Sydney. This developed into a chronic condition which prevailed for almost 10 years. It never dampened Frank’s spirit or his resolve.

If you could describe him in one word (or two) words it would be FAIR DINKUM. He was a sincere, loyal and trusted friend.

He was a communicator who could speak fluently in all emotions. It didn’t matter if he was happy, sad or angry. He could always say exactly what he wanted to say in the best way possible for others to understand.

Basically whatever he said he would always land on his feet.

When he went shopping he would spend all his time shaking hands with his friends; sometimes away for hours shopping for a small item.

He loved people and life and his teaching to his children was to “Love One Another” and “try to get along with people”. His saying was that “we are here to help one another; not to fight with one another”.

He held the Catholic Faith as a most important part of his life, and he taught all his family to pray to God, and the importance of going to church.