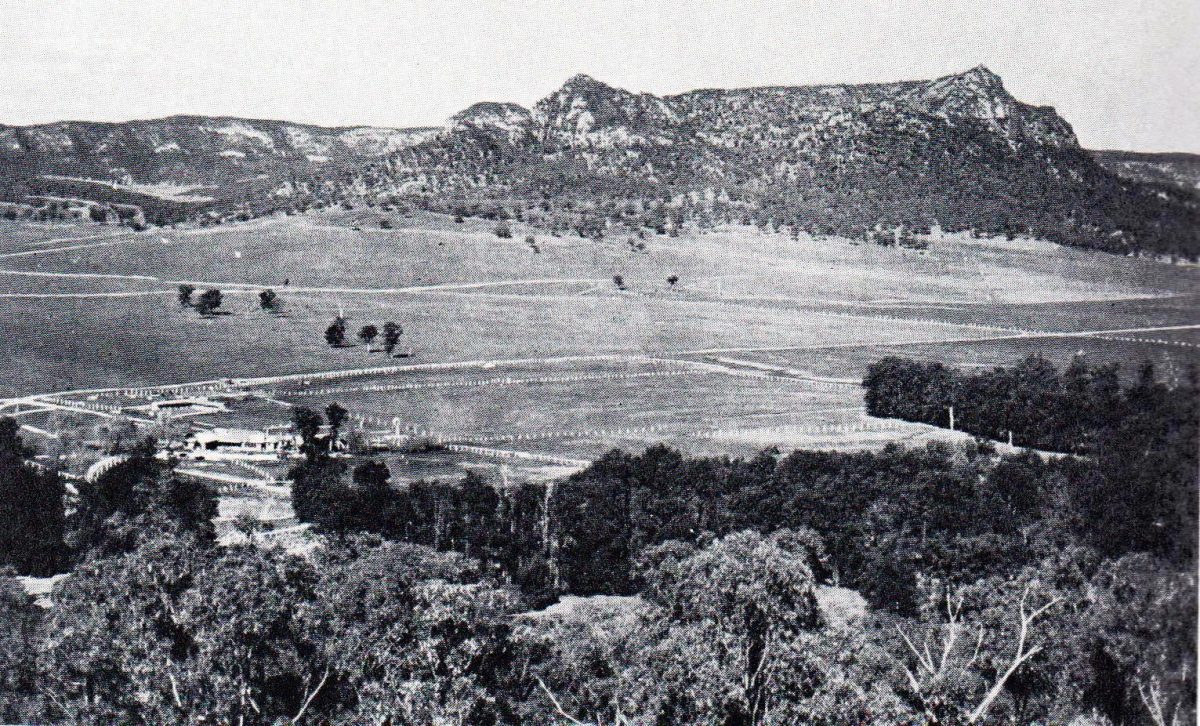 Featured Image: The Widden Valley as it appeared over 100 years ago; and about 50 years after first settlement? The ‘Cats Ears’ in the background are evocative of the valley and Emu Vale in particular.

This is the story of the Widden Valley ‘from the inside’; written and compiled by a former very refined lady resident with the objective purview and competent literacy skills to compile and augment the dossier. She married into the milieu and for many years lived a vicarious pioneering life very different to her Eastern Suburbs of Sydney origins.

We must have some psychic connection.   I was just thinking of you and reading the new information on Scone Veterinary hospital, which contains some visual presentation of the Widden Valley, when lo and behold up pops your email with a site for me to open and read.  Unfortunately, when I try to open it I just get the notice from the nursing home’s WiFi saying it won’t download.  I’ll see if one of the nurses can open it for me.

Why my thoughts drifted in your direction is because of your continual reference to the Widden Valley as “Terrible Hollow”.  Yes, the author of ‘Robbery Under Arms’, Thomas Browne, did spend a holiday in the Valley, at Baramul, I believe, and listened and digested stories told to him by the Valley settlers.  Rolf Boldrewood was Thomas Browne’s pen name.

Over the years I have written a few stories that have been published by a Newcastle publishing house, called Catchfire Press.  Some I have written about my early life in the Widden Valley and I have included some of its history.  No, not Doug Barries’.  A couple of my short stories concerning the Valley have been/and are being published in this nursing home’s magazine.  I have deliberately ‘dumbed them down’ as most residents here are very elderly and/or are Dementia sufferers.  I was wondering if you would like to hear about Terrible Hollow from my perspective?

I hope to be able to read, or listen to your email.

My thanks, best wishes and love, Jen.

I wonder if you know the story of the settlement of the Widden Valley?  It was not settled in the first place by the Thompson family, although they had a lot to do with its development.  The first settlers into the Valley were a couple by the name of George and Sarah Simpson at Emu Vale.  Both children of ex-convicts, Sarah was barely 16 years old, and heavily pregnant, whilst George was some-what older.

The year was 1846 when George and Sarah made their way into the Widden Valley.  They came from the Western fall of the Mountains, not from the Hunter Valley/Eastern side.  The Widden Valley was already known to a few people, mainly troopers from the Rylstone/Mudgee districts, who found the entrance to the Valley when on the trail of runaway convicts.  I believe these troopers “discovered” the caves containing the centuries’ old Aboriginal hand prints.

George and Sarah, together with their pack horses and bullock dray, left their home on the Hawkesbury, travelled across the Blue Mountains, and then made their way onto the plateau of Nullo Mountain.  From there they crossed onto Mount Corrigudgy and scrambled their way down the mountain and into the Emu Creek branch of the Widden Valley.  Can you imagine it; 16 year old heavily pregnant girl?

Their first permanent home (most likely a one or two roomed shack) was on the banks of the Emu Creek, in what we used to call the front lucerne paddock, right at the entrance to Emu Vale.  This rudimentary home was extended over the years, but it was washed away in one of the many floods that bedevil the Emu Creek. However it was still standing when three months after their arrival in the Valley, Sarah gave birth to the first of her twelve children, completely unattended by any woman of her kith or kin.

Down near where their home once stood by the banks of the creek is a graveyard, or cemetery, complete with marble headstones, containing the graves of both George and Sarah, and also those of 2 or 3 of their children who died in infancy.  At least, this cemetery was still there in our time in the Valley. It was surrounded by a tall, iron fence and my husband used to keep the graves weeded and generally neat and tidy.

George and Sarah’s next home stood virtually where the dear little cottage that my husband and I lived in stood.  Most of the Simpson house was pulled down by King Ranch when they purchased Emu Vale, but they left one of the main bedrooms, as well as the bathroom, separate toilet and laundry.  When the first-born Simpson son, also named George, grew to adulthood, and married, he built a home further up the Emu Creek.  This home no longer stands.  Around 1880, George Jnr. built yet another home quite close to the main homestead. This home was still extant when I lived on Emu Vale and was the home for my husband’s offsider, Brian Swords.  Our fencers and rabbiters, Clarrie and Joe lived in what had been Simpson’s dairy.

As I mentioned before, King Ranch pulled down most of what had been the Simpson homestead.  They left a bedroom, bathroom, toilet and laundry.  To these rooms, they added a very wide hallway (7 ft. wide).  At one end of the hall was built a walk-in pantry.  Four new rooms, all quite commodious, were built on: a 2nd bedroom, a sunroom or 3rd bedroom, a very large living room, and a gloriously big kitchen.  These rooms comprised the homestead, firstly for the manager of King Ranch, and after it was sold, and reverted to its original name of Emu Vale, for my husband and me.

Simpsons had been at Emu Vale for over 150 years, when they sold out to King Ranch.  King Ranch brought their Santa Gertrudis cattle there, but Emu Vale was not a successful enterprise under King Ranch’s stewardship, and they sold to Tom Flynn in 1961.  My husband took over as manager, and we stayed there until our son was of school age, even though there was a school at Widden in those days.

I think the Thompsons came next, probably from Nullo Mountain.  These three families, Harris, Simpson and Thompson, between them owned most of the land in the Valley in the early days.

Some few years ago now, we attended the Centenary of St. Lukes Church in the Widden Valley. After the church service we had a bring-your-own picnic in the grounds of the church.  The day held some significance for us, as my husband had been a Church Warden at Widden, and our son was baptised there.  St. Luke’s Church belonged to the greater Newcastle Diocese.  It was NOT the family chapel of the Thompson family, as Mrs Valda Thompson used to call it.  Two Simpson descendants attended the service and picnic, so mu husband obtained the keys of the front gate which was then kept locked, in order that we could take them ” back to Emu Vale” as both of these Simpsons had been born there.  We were horrified and not a little upset to see the state of the improvements. Every building was in a dilapidated state, and my dear little cottage was in an imminent state of total collapse, having been completely undermined by a multitude of wombats!  A few tears were shed that day, and we came away greatly saddened indeed.

Emu Vale and the Widden Valley still held a great significance for my husabnd and me.  Not only was Emu Vale our first marital home, it was through descendants of the Simpson family that I first met my partner.  Though not related to them himself, two of his aunts had married two Simpson descendants.  Previously I had mentioned that our son was baptised in Widden Church. One of his godfathers was a Simpson descendant and it is through him and his wife that I first met my husband.

I don’t know how “valid” my dissertation is!  I can’t say that what I have written is the truth, the whole truth and nothing but the truth.

The story of George and Sarah is as accurate as I know it.  It’s just that what I have written may not please any of their descendants, viz. I said that George and Sarah were children of ex-convicts.  This is 100% accurate, but their family story is somewhat less accurate, and has been handed down as such for the following generations.  It’s only quite recent that it is quite comme il faut to have a convict ancestor.

I know you can tell some stories about AO. Ellison, but I would like to tell you a personal one.  We had not long moved to Emu Vale, when my party-line phone rang (long-short-long was our ring).  My husband had just left to ride around to Oakleigh for some reason.  I picked up the phone when a fairly cultured voice said:

“Welcome to the Valley Mrs. E…s, you’ll find living here a bit different to the Supreme Court!”  “Yes” I spluttered, “I suppose I will”, He then went on to say that my husband had just taken a short cut, riding through Baramul, closely followed by a big black kelpie dog.

“It is a lovely animal, but you can tell him when he comes home that all dogs are shot on sight on Baramul.  If he takes the dog home now I will spare its life this time!”  Poor man, unbeknown to him, his dog had followed him.  I quickly rang Vas Flynn and told her to send the man and his dog home via the road, and not through A.O.’s paddocks.  Dogs were shot on sight on Oakleigh, too.  A.O. Was right in one thing he said though: living in the Valley was very different from my previous existence as a member of the Supreme Court staff!

Other histoire includes the Lee, Tindale, Thompson and Frost families as having provided original foundation settlers in the Widden Valley. These anecdotes vary according to with whom one is communicating? My very good friend the late ‘Bim’ Thompson always told me ancestral aboriginal people escorted the very first ‘white’ tribe into the valley from the Nullo direction. They told them that ‘Widden’ meant ‘stay here; go no further’ in whitefella-speak inferring ‘this is the best place to be’. They were almost certainly right; the pastures are pristine and the water supply permanent although you might have to dig for it at dry times?

Either John or William Lee is/are reputed to have maintained a massive herd of 5000 Shorthorn Cattle in the Valley. It was claimed to be the largest stud (‘pedigree’) herd in the world? Certainly members of the Lee family were some of the very first settlers in the Bathurst/Rylstone/ Bylong/Nullo areas during the early 1800s. They very sharply followed Blaxland, Lawson and Wentworth over the Blue Mountains.