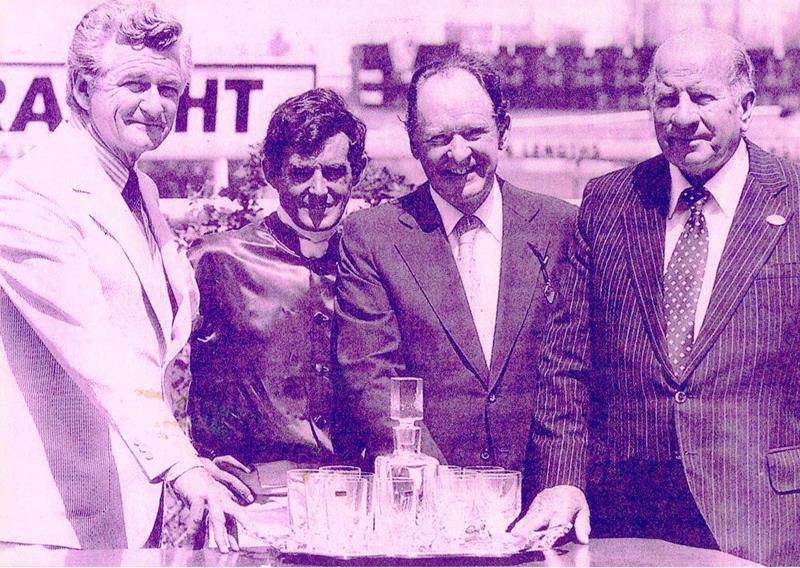 This article was published in Australian Dictionary of Biography, Volume 18, (MUP), 2012

Foreword (by the author WPH)

An erudite lady friend of mine with a deeply profound knowledge of the industry has written:

Thank you also for the article about GER. I’ m amazed that a man from such humble beginnings and such a paucity of education could rise to become a Captain of Industry.  Australia certainly is the land of opportunity where labor omnia vincit!  Love J…y.

I think it would be fair to claim that all four men assembled in the Featured Image were ‘from humble origins’? The Prime Minister, Champion Trainer and Chairman of the Sydney Turf Club might slightly shade outstanding jockey Neville Voigt from Quirindi; but not by much? As an immigrant I think it speaks volumes that all four are able to stand together equally on the podium in celebration of a seminal event?

Tommy Smith stated categorically that George Ryder was the best man for racing in his time. Who am I to argue? He was a great friend of Scone and the Scone Race Club although ‘controversial’ at times! He was the most stimulating company and a brilliant raconteur. I’m proud to have known him. The following biography by Wayne Peake captures the man superbly. There are some ‘not for publication stories’ which could richly enhance the encomium! It’s my opinion that George Ryder competes with Stanley Wootton for the title of most influential thoroughbred racing entrepreneur in NSW during the second half of the 20th century. Some might argue his influence was detrimental to the ‘breed’? Among his mantras were ‘put speed to speed and prey they stay’; ‘there are no looking races’ and ‘we need horses that fly around saucers’. He might have been thinking of the STC’s Canterbury Racecourse when promulgating the latter? I heard him say it when he was searching for a son of Dr Fager (USA) to stand at Kia Ora.

George Edward Ryder (1905-1989), racing administrator, stud master and businessman, was born on 29 June 1905 at Tingha, near Inverell, New South Wales, fourth child of George Henry Ryder, tin-miner, and his wife Inez Evelyn, née Arentz, both born locally.  Brought up in a slab hut with a pressed-earth floor, George was educated at Nullamanna Public School, leaving at age 13.  He had a job transporting a dentist on his rounds on a motorcycle with sidecar.  In about 1928 he moved to Cessnock.  After driving a bus for a year he purchased one on time payment.  During the 1930s he bought out most Hunter Valley rivals and his business grew into Rover Motors Pty Ltd, with forty-five buses in a modern fleet.  He sold it in 1946 and invested in hotels, including Craigieburn Guest House, Bowral.

Gaining a pilot’s licence, Ryder expanded into aviation.  While operating from Mascot airport he befriended Sir Charles Kingsford Smith.  In 1939 he established the first passenger run between Sydney and Newcastle.  Later he sold his aviation assets to Australian National Airways Pty Ltd.  A talented amateur sportsman, he was an excellent tennis player and golfer, and also enjoyed billiards, shooting, polo and speedboat driving.  He was president of Cessnock tennis and rugby league clubs.

On 7 September 1932 at St Andrew’s Presbyterian Church, Cessnock, Ryder had married Dorothy Abbott Scott, a clerk.  He entered horse racing in 1937 when he purchased a colt that he named Jan, after their daughter.  Jan won at Newcastle and a smitten Ryder purchased more racehorses, which Bayly Payten trained at Randwick.  A later horse, his best, was also named Jan.  Trained by T. J. Smith, she dominated weight-for-age races at the 1953 Randwick Easter carnival.  Apple Bay, winner of the 1955 Doomben Ten Thousand in Brisbane, was another notable horse to carry Ryder’s colours of pale blue, red diamond and sleeves, and yellow cap.

In 1946 with several partners Ryder acquired Woodlands Stud Farm Pty Ltd at Denman.  By the 1960s, under Ryder’s management, it reputedly produced annually more individual winners than any stud in the world.  Newton Wonder, a very successful sire, was followed by the imports Pipe of Peace, Sostenuto and King of Babylon, and the Australian-born Sky High.  In 1970 Ryder sold Woodlands but almost immediately bought Kia Ora Stud Farm Pty Ltd at Scone.  He championed the use of Australian-bred thoroughbred sires there until 1977.

Ryder had been an honorary representative of the Ministry of Munitions in the Hunter Valley during World War II.  In 1943 the premier of New South Wales, (Sir) William McKell, wanted a representative from the area on the board of the new Sydney Turf Club.  The jockey Maurice McCarten suggested Ryder, who then began his thirty-seven-year tenure—an Australian record.  He served as treasurer (1943-47, 1963-72), vice-chairman (1972-77) and chairman (1977-80).

In the early 1950s Ryder advocated a rich race for two-year-olds to be run over six furlongs (1200 m) at Rosehill.  The Golden Slipper Stakes was first run in 1957; its novel title came from the answer that Ryder’s wife gave when asked the perfect present for a baby.  For the Slipper he insisted that fillies receive a seven-pounds (3 kg) handicap from colts, a kilogram more than customary in set-weights races.  Other new provisions included first acceptances paid in the year of mating, followed by second and third acceptance payments, and the option to pay an exorbitant late entry fee.  The Golden Slipper quickly became the STC’s signature race and is the only non-Melbourne contest among Australia’s ‘big four’ races.  Ryder did much to provide more feature-race opportunities for fillies and mares.

During Ryder’s time the STC introduced numerous innovations to Australian racing including, in 1946, transportable barrier stalls.  The photo-finish camera and saddlecloth numbers on jockey’s armlets soon followed.  The STC recommenced, after twelve years, metropolitan midweek racing in 1954 and also trialled bookmaker-free race meetings.  In 1970 Ryder established the successful Australian Racing and Breeding Stables Ltd, a not-for-profit syndication—Australia’s first—that made ownership possible for the non-wealthy.  In 1983 it became a public company; he resigned as chairman the following year.

A gregarious man, Ryder was of average height with fair skin and blue eyes.  His character was uncomplicated, down-to-earth, loyal, obstinate and humorous.  He was fond of using figurative language.  With little regard for ‘big noters’, he led the cause of ‘battlers’ in racing.  He helped to gain entry to official grandstands for non-member owners.  Although a member of the Anglican Church he was not a regular churchgoer.  Survived by his wife and their daughter, Ryder died on 18 May 1989 at Elizabeth Bay, Sydney, and was cremated.  The Group 1 race, the George Ryder Stakes, run at Rosehill, commemorated his services to racing.  His portrait (1978) by Judy Cassab is held by the STC.

This might not be what you expect? It used to be the ‘biggest thing’ at Scone Race Club after the May Cup meeting. The latter was always the biggest single sporting event in the valley.

Super sleuth George Ryder conjured up yet another brilliant idea from a very fertile and inventive brain. He’s just introduced syndication of stallions to Australia enabling greater consumer participation and ostensibly also ‘affordability’ of superior bloodstock from both local and overseas supply markets. The USA had already forged the way in this as in many other entrepreneurial and commercial endeavours throughout the 20th century. Australia was playing ‘catch up’ with G E Ryder at the helm; a common theme in racing and breeding.

In 1971 George and his partners had sold Woodlands to an interesting International partnership between Lord Derby (UK) and Bob Kleberg of King Ranch, Texas (USA). The great days of domination of Sydney racing by the flagship D Chrsytal Snr, D Chrystal Jnr, Dr T Street and G E Ryder owners, trained by T J Smith at Randwick, ridden by G Moore ended forever.  Woodlands became Derby-King Ranch for the time being. Perhaps the money tree had shed all its leaves? However the sale enabled George and a few remaining cohort to acquire the famous but jaded Kia Ora Stud in the Segenhoe Valley near both Scone and Aberdeen. Instantly George sprang into action with the syndication of both Gynsynd and Baguette for Kia Ora. The immediate and prescient future was assured.

George then excelled with his Australian Racing and Breeding Syndicate (ARABS). For only $500:00 per share anyone could buy into the portfolio. It allowed thousands of small players with limited means to both participate in and enjoy the exquisite thrill of thoroughbred ownership. At least that was the theory. Even I was sucked in. GER could be VERY persuasive! It actually worked; with some corollary benefits for the Ryder family. There usually were. Armed with some more ‘new money’ (other people’s) George acquired an impressive and select band of broodmares. He was good at this. He brought some of them with him from Woodlands. In racing and breeding George knew the score. His network and knowledge were unmatched. The ultimate ‘hussler’ Bobby Riggs would have been no match for G E Ryder on the tennis court, the golf course or the racetrack.

The ARABS syndicate was instantly successful. The distinctive colours of yellow-and-black diamonds showed up front and central in many races throughput NSW and even further afield. Pat Farrell from Muswellbrook was one of the principal trainers for the syndicate. George picked his team well. Star apprentice Wayne Harris’ name was on everyone’s lips. Winners began to flow regularly. Hungry appetites and slaked thirsts for new age success were assuaged; at least for the time being.

The major showcase for the syndicate became the Open Day at Kia Ora Stud allied with the Scone Race Club’s ARABS Cup Meeting at White Park Race Track in Scone. I can honestly claim title to the latter concept. At least 1000 ARABS patrons crowded into the Upper Hunter for the ‘big weekend’. By 1980 George had on-sold Kia Ora Stud to John Clift from ‘The Dip’ Stud at Breeza on the black soil plains between Quirindi and Gunnedah. ‘Gunsynd’ had made both names famous throughout the country. The ARABS secretariat office at Double Bay staffed by Ryder family members was also expensive to maintain.  Cash flow was imperative. Some lifestyles are fiscally consumptive.

I have just rediscovered the ‘Galloping Around’ report in the Scone Advocate by Brian Russell of the ARABS Cup meeting April 1980. Brian’s ecstatic report featured the headline ‘Robert Thompson King of the ARABS’. Should that have been Sheikh? Robert certainly had a great day riding half the program with three winners in the six race card. The main race was the $2500:00 Mary Tange 2yo Sires Produce Stakes won by ‘Miss Bayreme’. Mrs Ron Tange always attended the races dressed immaculately featuring exotic Ascot-style hats. She and husband Ron were great supporters; and sponsors. The latter matter was not lost on G E Ryder!

Years later John Messara sniffed out an opportunity. He launched a successful takeover bid for all the ARABS bloodstock by the simple expedient of acquiring a majority shareholding. George Ryder did not see him coming. It was a sad day for him and his ‘family of ARABS’. The distinctive colours also went with the deal. They have been sported by some of Australia’s greatest racehorses in recent times.  Miss Finland is a prime example. These are raced under the banner of John Messara’s Arrowfield Stud; now perhaps the most successful exponent in the nation? Many would argue convincingly that John is the present day ‘Sheikh of Racing’?