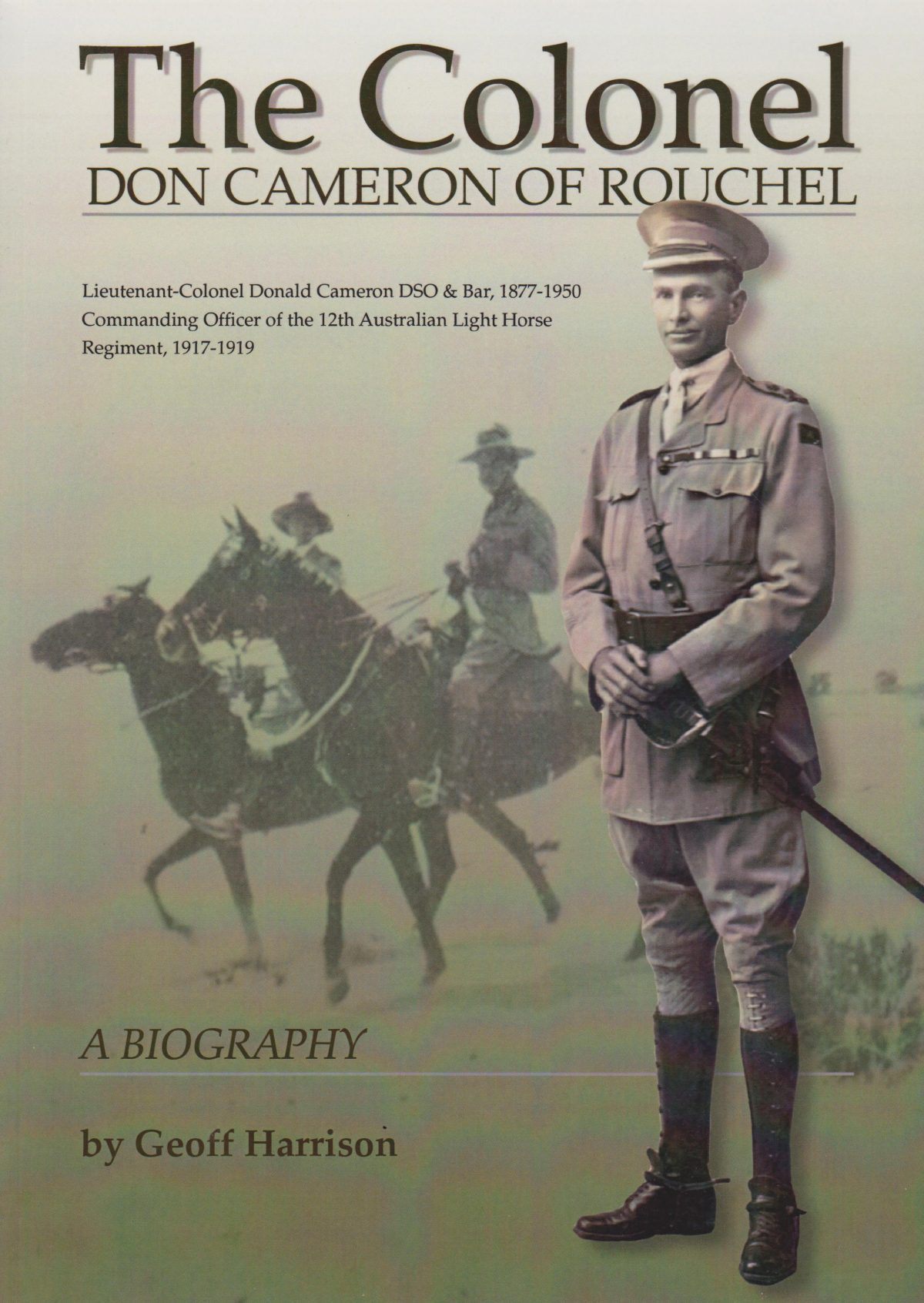 This is a tribute to another extraordinary Hunter Valley Hero. I acknowledge the source. I am very pleased to number Dick Cameron as one of my friends. We did some fencing together at Moobi about 40 years ago!

The historic World War I charge that resonated in the Hunter

IT wasn’t long before he died in 1950 that Upper Hunter man Donald Cameron talked to his son about the pivotal World War I Battle of Beersheba, where men and horses from the Hunter changed the course of history.

“My grandfather said to my father, ‘Some time people will remember what we did’,” Lieutenant Colonel Cameron’s grandson Dick Cameron said on Friday.

On Tuesday, 67 years after Mr Cameron’s death, people across Australia and in Israel will remember the heroic charge of 800 men from the 12th and 4th Light Horse brigades on the then Turkish town of Beersheba in the afternoon of October 31, 1917.

People will gather at the tiny cemetery of Rouchel, near Scone, at the grave of Donald Cameron; in Muswellbrook at the unveiling of a statue to commemorate the crucial role played by the Upper Hunter-bred waler horse at Beersheba; and in Murrurundi on Saturday where one of the most famous of the Hunter walers – the Bloomfield Homestead mare Midnight and her rider, Captain Guy Haydon – will be honoured.

The significance of the Beersheba charge – which allowed Allied forces to overpower Turkish defences and helped end the war – has been overshadowed by the Gallipoli defeat. But descendants of the Hunter men at Beersheba say it’s a victory that has always resonated in the region.

“There were three Bloomfield horses in the charge, and we’re the custodians of the waler breed,” said Guy Haydon’s great nephew, Peter, of Haydon Horse Stud, which has been in the family since the 1830s. Records show a direct line between the earliest walers at Bloomfield and today’s horses.

Tens of thousands of waler horses were transported from Australia to fight in World War I. Only one returned.

The men thought they’d be riding their horses down the main streets of towns like Murrurundi but they weren’t allowed to bring them home.

Peter Haydon of the Walers who fought in World War I:

“The men thought they’d be riding their horses down the main streets of towns like Murrurundi but they weren’t allowed to bring them home,” Mr Haydon said.

“They were meant to hand their horses to the locals but they knew they’d be mistreated so they took the horses out to the desert and put them down, then they handed their saddles and bridles back in.”

The Haydon family has a private collection of more than 800 photographs of the Light Horse brigades and Beersheba, and letters from Guy Haydon to his family about the historic charge.

“Although it is the heaviest fire I have been under, I never felt less afraid, and I was terribly disappointed in being shot before reaching the town,” said Guy Haydon about the charge and the shot that left him hospitalised. Midnight was shot and injured, never to be seen again.

The Haydon collection has recently been digitalised and a record donated to the University of Newcastle.

Dick Cameron grew up with the story that his grandfather Donald was mastermind of the audacious direct charge at Beersheba, after some evidence he was credited by the British for the idea of going “straight at them”.

“My grandfather had a tough life. He finished his schooling when he was 11 and was shepherding sheep in the mountains on his own at that age,” Mr Cameron said.

“He worked on Belltrees (the stately Hunter home of the wealthy White family) and the family gave him access to their library. He was self-taught and very well read.”

Donald Cameron served in the Boer War and was briefly a prisoner of war. He was a leader of the 12th Light Horse at Beersheba who “had a tremendous empathy for his men because he never lost contact with how it felt to be at the bottom of life”, his grandson said.

When Donald Cameron returned to the Hunter after the war he showed his love for the men of the 12th Light Horse by naming his three children after some of them. Even his daughter, Patricia, carried the surname of a Light Horse man named Single as her middle name.

“That’s how much he loved his men,” Dick Cameron said.

Muswellbrook Shire Council will host a day of events on Tuesday to mark the Hunter region’s significant links to the Beersheba campaign. A service at Rouchel cemetery will start at 12.15pm. The statue, Over the Top, by sculptor Brett “Mon” Garling, will be unveiled in Brook Street at 3pm, followed by a church service at St Albans Anglican Church at 4.30pm.

A spokesman for Muswellbrook Council said the Hunter’s role in World War I, and the transportation of sturdy Waler horses from Piercefield in Muswellbrook to Sydney, had to be acknowledged.

“It remains a great source of regret that those noble horses did not return home because of the threat of disease,” the spokesman said.

In Murrurundi on Saturday there will be a 12th Light Horse ceremonial parade at 11am and a series of events including screenings of the documentary, The Waler, at 3pm and 7pm.

Donald Cameron (1877-1950), soldier and grazier, was born on 21 August 1877 at Rouchel near Scone, New South Wales, son of Kenneth Cameron, grazier, and his wife Mary Ann, née McMullin both native-born. After attending Rouchel Public School he worked on near-by grazing properties and became skilled in bushcraft, horsemanship and rifle-shooting.

In 1899 Cameron enlisted for service in the South African War as a trooper in the 1st Australian Horse and sailed for Cape Town in January 1900. His squadron was attached to the Royal Scots Greys at Modder River and served in operations through the Orange Free State and Transvaal. At Zand River in May Cameron was involved in a Boer ambush; his horse was shot and he was captured, but escaped a few weeks later. He returned home with his unit in May 1901 but re-enlisted and was commissioned as a lieutenant in the 3rd New South Wales Imperial Bushmen’s Regiment. He served for fifteen months in the Transvaal where his unit was engaged in dispersing concentrations of Boer troops; because of his bushcraft and tactical skill Cameron excelled at this work which involved long night-marches over unknown and sometimes rugged country. Although still a subaltern, he commanded the squadron for ten months in 1901-02.

On returning home Cameron purchased grazing land at Rouchel and worked this property until World War I; he was active in the local Presbyterian church and in political and sporting organizations. He enlisted in the Australian Imperial Force as a captain on 28 Ocotber 1914, was promoted major on 9 September 1915 and appointed to ‘C’ Squadron, 12th Light Horse Regiment. The unit fought as infantry at Gallipoli from 29 August until the evacuation; Cameron was attached to the 6th L.H.R. at Holly Spur, Wilson’s Lookout and Ryrie’s Post. He rejoined his own regiment in Egypt and served in all its engagements in Sinai, Palestine and Syria; from April 1917, when he was promoted lieutenant-colonel, he was commanding officer. His transparent honesty of purpose and sense of fairness quickly won him the loyalty of his men and his unit was noted for its excellent discipline.

Cameron was a tall, wiry man with a direct eye and a quiet manner. In action he was imperturbable, a trusted leader and sound tactician. He frequently urged the use of mounted action and was prominent in the famous charge which captured Beersheba in October 1917. The 4th and 12th L.H.Rs. surprised and over-ran Turkish defences; Cameron’s men galloped on to seize the town, capturing guns and taking prisoners on the way. He was awarded the Distinguished Service Order for directing the attack in ‘an extraordinarily able and determined manner’. He gained a Bar to this award in operations leading to the capture of Damascus in 1918; on 30 September he led a spirited mounted charge on Kaukab, ‘seized his objective with great dash, and drove the enemy in disorder towards Damascus’. After the Armistice he commanded the 4th Light Horse Brigade for a month before returning to Australia in July 1919.

After demobilization Cameron returned to his property at Rouchel and on 11 December at Singleton married Ivy Eliza Dawes. From 1920 until he retired in 1933 he was a lieutenant-colonel in the Australian Military Forces. He was active in local affairs and in World War II helped organize the Volunteer Defence Corps in the Hunter Valley. Survived by his wife, a daughter and one of his two sons, he died of diabetes at Muswellbrook on 7 October 1950 and was buried in Rouchel Presbyterian cemetery.