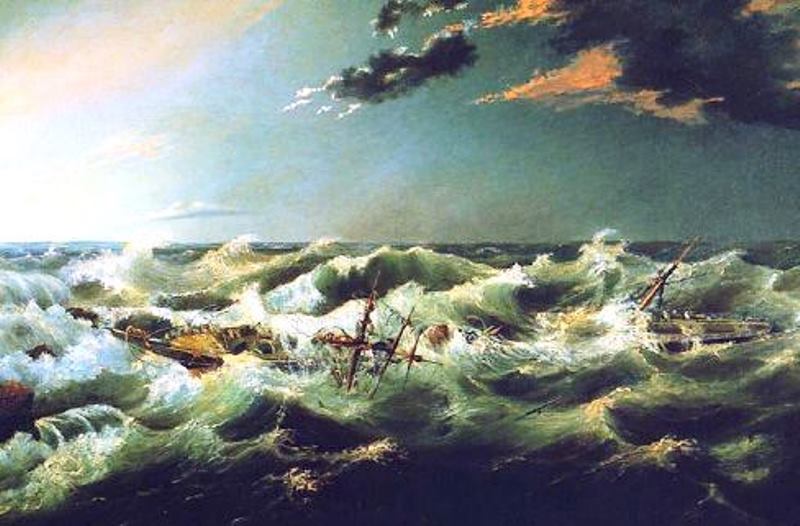 Shipping Horses to the Antipodes

Featured Image: 1859 painting of the wreck of the Admella by James Shaw; horse battling the surf can be seen to the left. While the exact location of the horse may be speculative, Shaw’s depiction of the Admella, which hung for months on the rocks and was seen by Shaw, is accurate.

In the 18th and 19th centuries, the time taken for voyages on sailing ships from England to the east coast of America, vis-a-vis those to the Antipodes, do not bear a true comparison. The direct shipping route from Southampton to New York is listed as 3,091 nautical miles. From Southampton to Sydney, Australia, via Cape Town was 12,385 miles, with a further 1,233 miles from Sydney to Wellington, New Zealand.

But sailing ships, dependent on wind power, were unable to take a direct route. For example, Captain Arthur Phillip’s First Fleet left Spithead (England) on 13th May 1787, and sailed in a slow sweep down the coast of North Africa, to pick up the favourable trade winds, then crossed the Atlantic Ocean to Rio de Janeiro in South America. From Rio, the ships drifted back across the South Atlantic Ocean, and on 13th October, 1787, five months after leaving England, the expedition reached the Dutch settlement at Cape Town (the tip of South Africa). Following their stay of a month in Cape Town, the First Fleet sailed for Botany Bay, New South Wales (Australia), arriving on 19th January 1788, to complete a journey of at least 16,000 miles in eight months. The Fleet loaded nine “Cape” horses at Cape Town, and safely landed them at Port Jackson upon completion of the two month long, last leg of the voyage, but horses sent from England would endure a far longer journey.

While the First Fleet did not carry any thoroughbreds from England, the onerous task of shipping horses from Britain, keeping them healthy, and safely landing them after such a long journey, is obvious. Nevertheless, a British coach horse stallion, Northumberland, arrived in Sydney from England in the early 19th century (1802). This horse, together with imports from Cape Town — Rockingham and Washington, both likely to have been part-thoroughbred — plus several Arab stallions from India, when put over “coarse” mares from Cape Town and Calcutta, resulted in a steady improvement of the early colonial bloodhorse.

From the 1830s onwards, a regular trickle of thoroughbred stallions arrived in Australia from Great Britain, despite a journey of at least four or five months, even for the faster clipper sailing ships and early steamships of the mid-nineteenth century. That most of the horses survived can be put down to several factors, including:

*There were very small numbers of these valuable horses in any one shipment. They had close, often individual, attention to their needs from dedicated stablehands.

*Changes were made in a horse’s diet before shipment: grain and green grass were removed from their foodstuffs, replaced with liberal amounts of hay, plus carrots and bran, along with an unlimited supply of potable water.

*Onshore stabling before shipment introduced a horse to the specially fitted boxes or horse stalls onboard the vessel. These boxes had adjustable walls that restricted movement in bad weather; combined with slings, horses were secured against undue buffeting when a ship was rolling. Boxes were also fitted with removable cocoanut — or similar — matting to prevent slipping, and allow horses a padded surface to lie upon when the boxes were extended during good weather. These specialised merchant ships also provided adequate ventilation, access for mucking out and feeding, and exercise facilities.

The Prince of Wales and ceremonial horses were sent to India and Australia to celebrate Queen Victoria’s appointment as Empress of India in September of 1875; the transport was the HMS Serapis, a Royal Navy troopship. By this time, a trip by steamship — versus sailing vessel — had reduced the time to India to about 70 days. Above: Horses being exercised aboard ship. Below: The Prince’s stable manager inspecting the horses; note the ventilated stall fronts

Despite precautions, the loss of some blood horses and thoroughbreds on long voyages was inevitable, and while records are scanty, this fact is confirmed by newspaper references of the time.

Even horses making the ten to twelve week trip (by sail) from India were not immune. In 1804, the Lady Barlow sailed from Bengal with 202 head of cattle and a “fine Arab horse” on board. During a stormy voyage, one third of the cattle died, and the Arab stallion expired as the ship entered Sydney harbour.

A similar fate was in store for one of John Hooke’s horses. The Hooke family from England arrived at Port Jackson, Sydney, in John Hooke’s brig Courier on 1st March 1828. His British-bred thoroughbred stallion, Chilton (1820, by Old Chilton, out of Arcadia) was safely landed. However, Hooke was not as fortunate with his 800 guinea carriage stallion, which died within sight of land at Sydney Heads.

In 1829, James Henty bought four racehorses from the (3rd) Earl of Egremont, a noted British breeder. All were intended for the new West Australia colony at Swan River (now the City of Perth). During the latter part of the four month voyage of the Caroline, which sailed to Perth via Brazil, around treacherous Cape Horn, and across the stormy Southern Ocean, she struck wild gales and huge seas. As a result, the accompanying groom was forced to reduce the width of his stalls and set up slings to protect his costly charges. Three of the four horses survived the remorseless buffetings. These were the full sisters Merino (1826) and Petworth (1825) (by Whalebone, out of Vicarage by Octavius), and Young Wanderer (1826, by Sir John – Ogress, by Octavius). But, as Jane Roberts recorded in Two Years at Sea, a London-published diary of her time in Perth and Tasmania, “…a valuable horse on board was so badly bruised from being thrown about in its wooden ‘horse house’ during a storm, it soon died of its injuries.” This was the mare Canopy.

On August 8th 1842, William Pomeroy Green sailed from Plymouth with his family, crew, and livestock in the chartered ship Sarah. His four horses, tended by a “Head Groom, Second Groom and a useful boy” were the thorougbreds Rory O’More (Birdcatcher – Nora Creina’s dam), and Nora Creina (Sir Edward Codrington – mare by Drone); a hunter, named Pickwick, and a “favourite mare,” Taglioni. In his diary, under a September entry, Green records: “My horses are doing well. I take them to the main hatch every day that is fine, and give them the height of grooming and salt water washing.” Although there were several gales on the passage, and parts of the ship’s bulwarks were washed away, the precious cargo arrived safely at Port Phillip, Melbourne, on the first day of December. This voyage illustrates the advantages of keeping the number of horses low, and the number of attendants high.

Another ship carrying valuable thoroughbreds — the stallion Traducer and equally famous mare Mermaid (dam of Lurline and Le Loup), Tom King, Leotard, Tomiris, and one other mare — set sail on the 1st of January 1862 from England. The English-born, French-based horseman, W.C. Webb, was hired by their purchaser, Lancelot Walker, of Canterbury, New Zealand, to take charge of the horses during the voyage:

“The ship they came on was the Kensington, a sailing vessel, and the voyage, which included a stoppage at the Cape for a week, was an eventful and a long one, occupying from New Year’s Day to June 21st, 1862. Several times it was contemplated putting some of the horses overboard, in such a weak condition they had got. Indeed, Mr. Walker despaired of landing them; but Mr. Innes, of Harris and Innes, who had on board a Clydesdale stallion, Lord Fergus, was more hopeful, and as a matter of fact, bought the lot from Mr. Walker a few days off port. Mr. Webb remained in charge until the horses were sold.” [Extract from Men of Mark in the World of Sport in New Zealand, by J. Chadwick, Auckland, 1906]

Even the short Australian coastal shipping routes provided their share of early shipwrecks and consequent horse deaths. On 5th August 1859, the steamer Admella left Adelaide, bound for Melbourne, where the first Australian Champion Sweepstakes to determine the fastest horse in the country was to be held on 1st October 1859. The Admella carried 87 passengers, a crew of 26, plus cargo, including three racehorses and three stallions. The two Sweepstakes’ entrants, from South Australia, were Jupiter and The Barber, while the third racehorse was South Australia’s champion steeplechaser, The Shamrock.

In the early hours of Saturday 6th August, 1859, in heavy fog the Admella grounded on the Carpenter Rocks at Cape Northumberland. The shipwreck cost 89 human lives, but remarkably The Barber and The Shamrock struggled ashore. Unfortunately, the latter broke a leg and had to be destroyed, but ten days later The Barber was found in scrub land and was later able to take his place in the Australian Champion Sweepstakes field.

On 11th September 1876, nine racehorses died when the steamship City of Melbourne ran into a heavy storm on its way from Sydney to Melbourne for that year’s Cup. They included Eros, a Gwendoline filly, Poacher, Burgundy, Nemesis, Sovereign, Etoile du Matin, and the greatest loss of all: Etienne de Mestre’s race favourite, Robin Hood. Only two horses survived the on-deck carnage, Redwood, and a Chrysolite colt, later named Robinson Crusoe, which went on to become a successful racehorse and sire.

Perhaps the worst shipping disaster for early horse exports from Australia was a shipment of “walers” despatched from Sydney to India on the Hyderabad on 26th April 1845. The 118 horses destined for the British Army in India were all drowned when the ship struck a rock 100 miles of Cape York. Fortunately, there was no loss of human life.