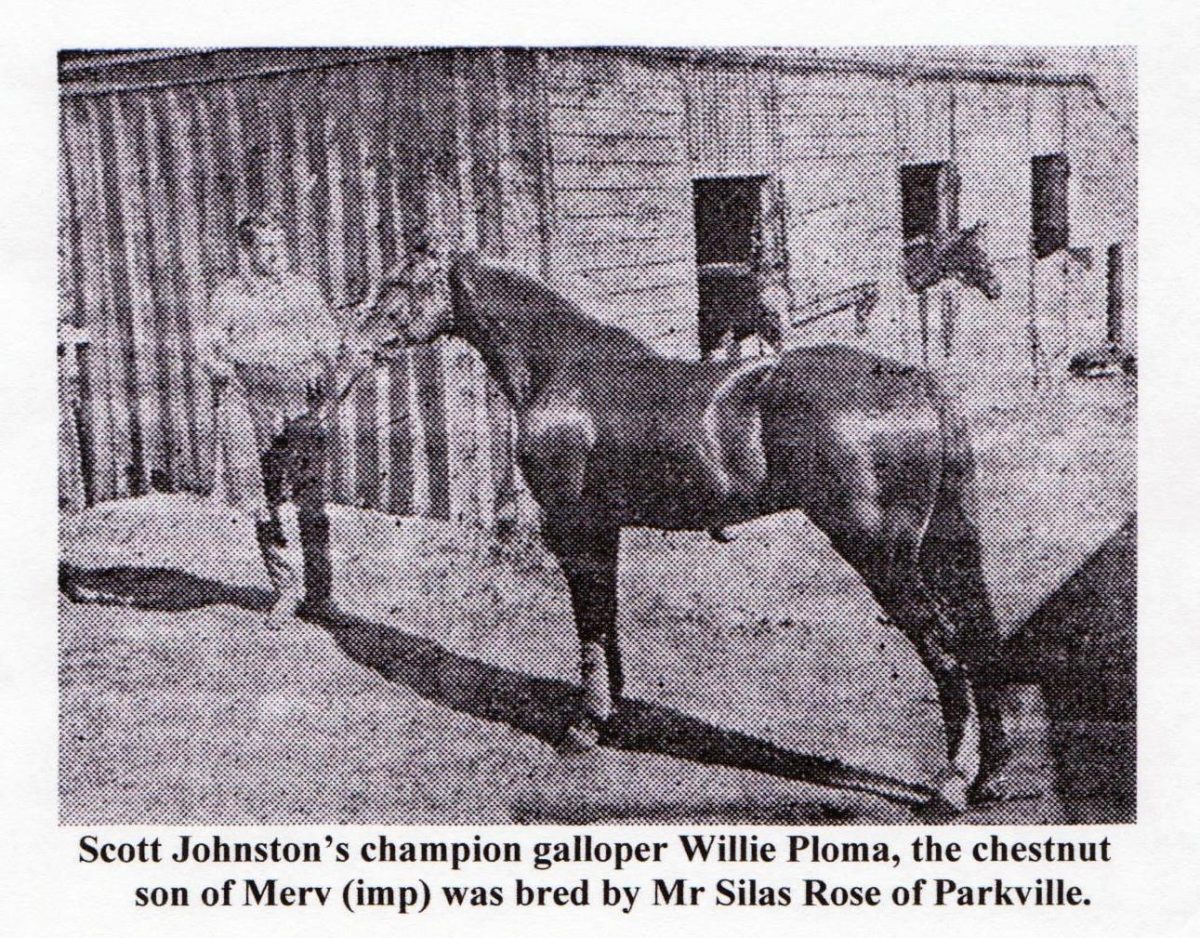 The old timer who knocked the dust off some Good’uns

He was addressed as “Clancy” – the fellow immortalised by Paterson because he has a drovin’ gone – as he joined the young blokes, who found time to shift their gaze from the coloured sheets of the Turf Form. The old-timer joined in the discussion in his usual quiet, yet evidently, interested manner.

“Wouldn’t Earl Pentheus have a chance?” was his only reply, or question, in answer to one of the party, as he proceeded to finish the rolling of a cigarette. “What do you know about horses anyway?” was a direct shot from one of the lads.

“I knocked the dust from a few scrubbers in the bush in my time,” and pausing to apply a match to the cigarette, added nonchalantly, “And one of them took the Denman Stakes at Randwick”.

It was Jim Johnston, who stopped his questioner rather nicely, even though in those days he emulated “Clancy of the Overflow” at the rear of moving woollies to different parts of the State…..It was when Willie Plomer, a tractable son of the Donovan sire, Merv (imp.), had to be brought into calculations in the best sprinting company of Turfdom. Mentored by Scott Johnston, this bold galloper was taken to Royal Randwick.

On that particular day, he was discarded by the rank and file of punters, and 33 to 1 was called about the country prod, with the great Balarang an odds on favourite. The satchel boys were yelling themselves hoarse, the closing symphony before the flag-fall being “ten-to-one – bar one”.

Willie Plomer was soon making play and by the time the straight was entered was coasting along, a full eight lengths in front and there he remained to win by his rider sitting against the chestnut, who was poetry in motion when on the job.

The horse boxes that can be seen behind Willie Plomer (see photo) were home to many of Scott Johnston’s top-line country gallopers. With Miss Benita, Scott Johnston won no fewer than 32 races, taking out three with her on one afternoon at Gunnedah.

But more outstanding successes were destined to come the way of the young Scone owner-trainer. He lifted a power of races with Ruby Queen, Willie Plomer and Blue Tilly; all out of the greta mare Thelma, bred by Silas Rose, of Parkville; the first named by Renoric, and the remaining pair by Merv.

Scott really got hold of BlueTilly after she had been placed on discard, or scrap heap, as it were, but he patched her up and scored with her on practically every provincial course between Armidale and Newcastle.

At one stage of her remarkable career she won six on end, commencing with a double at the Armidale Cup meeting, two more at Tamworth, and another brace at Wallsend – six races in eight days. She won twice in the one day at the old Rutherford racecourse at Maitland, later the site of a large woollen mill. The brilliant daughter of Merv began by winning the Maitland Handicap at 10/1, by 10 lengths and equalled the course record. Saddled up again, Blue Tilly won the Rutherford Handicap, this time beating the AJC Epsom winner Port Rush by 12 lengths.

It was at Wallsend that Lord Nagar was favourite at a prohibitive price, but Blue Tilly left him standing at the end of then furlongs. Such a burst of brilliance did she reveal that at least one astute judge on the course contended that the mighty Woorak would have had the job in front of him in running her down. And within a short week, Lord Nagar, bred at “Kelvinside”, or was it “Russley”, Aberdeen? fairly bolted with the Villiers Stakes at Randwick.

Willie Plomer, a rich chestnut colt, was however, probably the pick of a fine string held by the Scone-ite. He won in every direction and in all company. Then there was Aberdonia, a gelding that came into his hands when it was thought the best had been seen of him. He was a flat-footed horse, the hard tracks did not suit him, but in the softer going he troubled the judge on at least thirty occasions. And other bows in the stable string were the bold gallopers, Dalmeny King and Electric Bullet, who picked up their fair share of races.

Mersina, another cast-off resurrected by the master of Tyrone, landed races at will, almost including an Armidale Cup. With St. Rosaline, he also landed quite a few races, including a Corinthian Handicap at Scone under the steadier of 14st. 2lbs.

The stories of Scott Johnston are legion from the time he set up “Tyrone”, a 700-acre property just north of Scone.

He trained his first winner, Blue Graft, in 1910 when he walked him and another horse the 16 miles from home (Tyrone) to Muswellbrook races. Blue Graft won the Flying and the next morning Scott made the return trip.

Scott also won the Wallabadah Cup five times and taking out the last Scone Cup held on the old Satur racecourse on a sire which overlooks the new modern complex.

Denis Lad proved a hand galloper out of the Scott Johnston stable, included among his many wins the first running of the President’s Cup at Quirindi in 1934; also the time honoured Armidale City Handicap.

Towards the latter part of his training career Scott Johnston had success with some great country performed gallopers; Some Rock with whom he won 26 races, Pitlochry 31 races including successive Quirindi Cups, Moriarty, with whom he won the Newcastle Northern Cup, also Briar Bay (Aberdeen Cup), Warrah Wood and Dispute.

Success came naturally to this bush horseman with winner too many to count and trophies to fill a room of cabinets. But it was always the one he didn’t win that disappointed the Scone trainer, as put in his own words: “I had a pretty good horse in Freyburg. He should have won the Doomben Ten Thousand…….. Warrah King came down right in front of Freyburg…… yet he finished fourth, with one of his shoes torn off,” Scott said.

The veteran horseman, rich in every way of the “fair dinkum” Aussie passed away in 1984, aged 88, handing in his trainer’s licence just twelve months previously as the oldest trainer in Northern New South Wales.