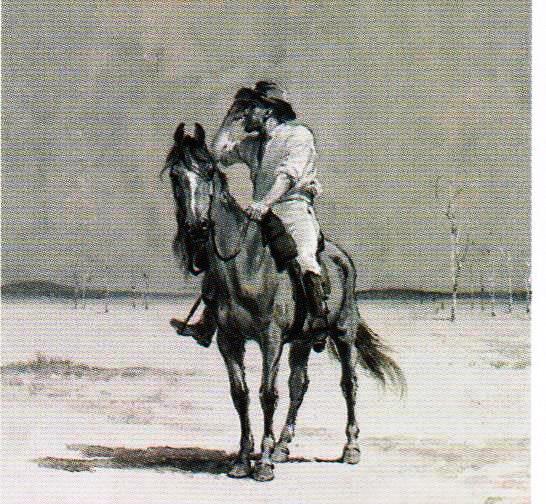 Settlement of outlying regions accelerated during the 1830s and the stockman was increasingly in demand. It is from this period that illustration of stock work begins to appear, mostly produced by amateur artists directly involved in station activities. The drawings in John Stirling’s ‘Sketches in the Station Wyong NSW 1884’ are typical examples. Professional artists including Samuel Thomas Gill and William Strutt depicted this facet of colonial life from the 1860s.

The stockman is often shown rounding up cattle, galloping down a hillside or over rough country, riding out to or returning from stock work, or undertaking duties in cattle yards. In such works as William Strutt’s Black Thursday 1850: The track of death; the mounted stockman is depicted battling the harsh conditions of the Australian bush. Artworks of the late nineteenth century begin to show the stockman in an heroic manner, as in Percy Spence’s View of a man on horseback.