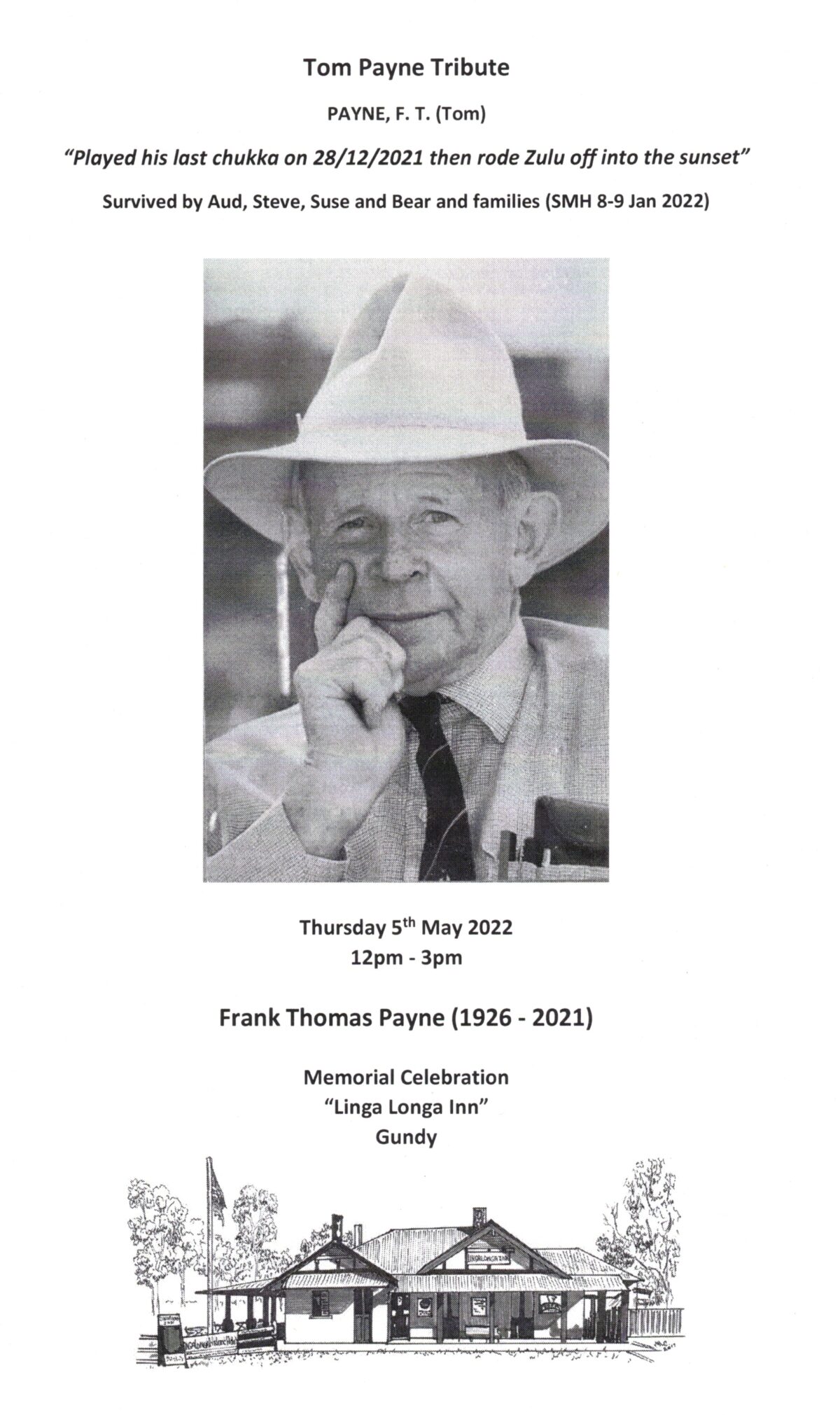 There was movement at the station, for the word had passed around
That the colt from Old Regret had got away,
And had joined the wild bush horses –  he was worth a thousand pound,
So all the cracks had gathered to the fray.
All the tried and noted riders from the stations near and far
Had mustered at the homestead overnight,
For the bushmen love hard riding where the wild bush horses are,
And the stock-horse snuffs the battle with delight.

It was a classic of cosmic proportion. Well might Banjo Paterson have penned something akin to his epic 1st stanza of “The Man From Snowy River”. Banjo himself would have played polo 120+ years ago against a few of the forebears of those present including MC Anto White and Scone Polo President Duncan Macintyre?

The celebration kicked off at the Scone Polo Club where a memorial plaque was unveiled at the Flagpole. This was an invitation event for family and close friends. Anto White directed operations in his own inimical style. Arthur ‘Joe’ Bragg, John Gilder and Bear Payne delivered homilies laced with humour and fondest reminiscences. A clear pathway of the classic trifecta of ‘Waverley’, ‘Terrigal’ and Polo was soon established.

Adjournment to the ‘Linga Longa’ was a popular sequel to meet up with the main ‘congregation’. Orations were provided by Bill Howey, John Binnie, Katrina ‘Treen’ Payne, Millie Plumptre, Ken MacCallum, Susie Fearon/Payne, Angus Payne and Steve Payne. The latter stole the show with a compassionate masterpiece of construction worthy of publication ‘in his own (w)rite’; as John Lennon might have written? The hospitality at the legendary Gundy Hostelry was predictably munificent. Thank you Brenda ‘Brazie’ Ogilvie and the Payne Family!

I pay my respects to our Elder Aunty Helen Archibald

Some knew him as Tom or uncle Tom

For some it was Frank

And for some it was Mr. Payne.

Last week I had a dream

In it, I was strangely wearing this Scone Polo Club beret I have on

Dad and I roamed dream-like through time and space

And up over the range to Wombramurra and beyond

And he said to me

So, you’re gathering to Farewell me

What will you remember now I’m gone?

That I got really skinny and bony?

And my pajamas were too big for me?

A packet of pads on the sideboard?

And my bloody hearing aids giving me the shits?

And I got so frustrated about what I couldn’t do or say or be?

And I was worrying about your mother?

as the light was ebbing away from me

And I said to you

Ah Steve, it’s time to get the shotgun out.

Is that what you will remember?

And he took me on a journey

Through 95 years of photos and trophies and memories

As a young boy with my mother

With the family in the garden at Waverley

at the Royal Easter show and the Australia Club

as a young man

then later the Devon Judge

And here we are at our wedding

and packing for our honeymoon.

She stuck with me all the way

Hearing the news of your birth

in the shearing shed drafting yards.

Then came Suse and Bear

and all your children and their children

and at their weddings

Losing my brother, my nephew

and then the grandson who was most like me

all before their time

Here I am helping you,

a 16-year-old falling into unconsciousness,

out of the shower and to Royal North Shore hospital

I’m in the stables at Isismede

with Plume and Detour and Lysistrata

running up and down the sideline at TAS

and abuse at the umpire

Here’s me with a group of young fellas

who I took under my wing over the years

At Terrigal, the family have coming for Xmas

Rum and milk for breakfast with JK and Wally

With the gang at the polo ground,

A few late afternoon grogs at the bar

A pool party at Waverley

Those were the days

We worked hard and payed hard

and suddenly he went quiet and almost whispered

when you can’t look after yourself any more

And you end up in bed

completely dependent on the good people around you

With a sheepish grin, he said

and then we landed

on top of the Waverley Pinnacle

And a mob of Isis River kids

droving a mob of cattle over the Crawney pass

to their new property

We saw their father FT

And way, way back

We could just hear the distant sound of singing

To the steady beat of clapsticks. 1

And out of the blue he said

Will you still love me now I’m gone?

In the silence that followed as I considered his question

I heard the screech of Cockatoos

in the She Oaks and Red gums along the Isis

and then I started remembering..

I was in dust and flies and sounds of milling steers for camp draft, steer ride and bulldogging

Holding on to the back of the land rover,

riding boots skidding on the icy grass of the killing paddock

On the back verandah

The two of us

prowling round the old Fordson tractor

in the middle of the paddock

yelling at each other –

we had a good laugh about that

did you ever wonder what someone driving along the road would have thought about that!

But then he got serious again

But what will you remember?

In my mind there’s a cricket bat, a football, a polo stick

And bridle, spurs and stock whip

The man in the hat

He closed his eyes and lent back

against the stone of the trig station

And surprised me again

And what will remain?

I looked at him resting peacefully

The spirit in your eyes

That carries on in your children

A spirit that lived and loved life to the full

One part generous, one part compassionate,

One part inspiring and one part utterly infuriating

From our vantage point

High above the Isis

And saw the group of people, young and old,

Who were gathered at the Linga Longa

to pay their last respects

to the warts and all

1 I reluctantly omitted an Acknowledgement of Wannarua Country and this line, to avoid discord at the celebration.

Extracts from my own (WPH) tribute are as follows:

There is little doubt that one of the great country characters I’ve met during my life in Scone is Tom Payne. His is a Type ‘A’ Personality writ proudly in spades in big bold black type. Come to think of it Tom would have ‘made his mark’ anywhere on the globe! Certainly you’d have heard him. Tom is a very passionate man. Family came first although he could be authoritarian. It was in Polo Tom made his biggest, some might say ‘loudest’ impact. I believe he filled every executive position in the Scone Polo Club whether appointed or not. It was no accident the family chose to celebrate Tom’s 90th birthday at the Isis River Grounds which he loved. Sarah and I were greatly honoured to be invited. Tom was a more than useful player and I believe attained a 4-goal rating at his peak. His strength was in his team play. He was certainly an accomplished all round horseman. It was a set of skills then essential to survival on the land.

Tom could be very caring, compassionate and kind. A great example was his mentoring of my good friend the late Ken McConville. Ken had been assigned to the one-teacher Isis River School at ‘Waverley’; promoted, promulgated, instigated, supported and maintained by the Payne family. It was Ken’s first posting after graduating at Teacher’s Training College. He aspired to obtain his Bachelor of Arts (BA) which would enhance his career prospects and promotion. Ken was able to achieve these goals with significant support from Tom and family. It was no accident that Ken’s next posting was to the Armidale School (TAS); Tom’s own Alma Mater. Ken was instrumental with Bill Rose in ‘reigniting’ the Scone Rugby Club in 1967.

It would be churlish of me not to mention faithful and supportive spouse Audrey; always there and always ready, willing and able. Now over 90 I’ve just visited both at their home at Erina. It was a most poignant meeting. Tom presented me with a magnificent old leather-bound catalogue for my safe keeping as custodian. I responded as best I could with my ‘Memoir’. It was a grossly unfair and unbalanced exchange.